A Tory minister sexually harassed Diane Abbott in a Commons bar last night, and the media is laughing about it - Canary 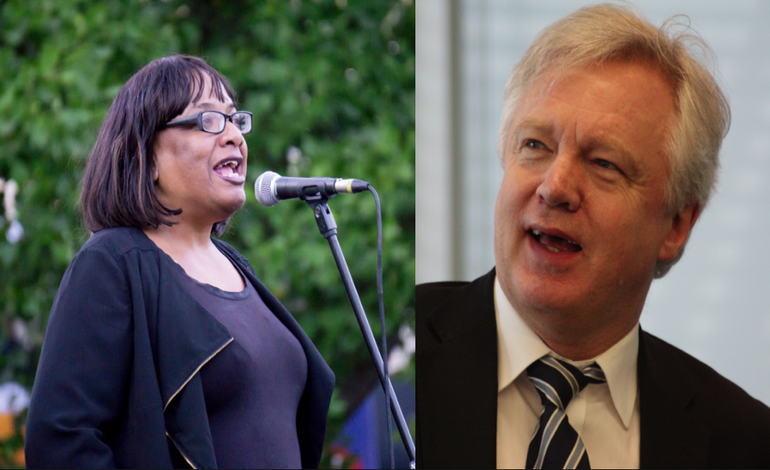 The Secretary of State for Brexit is alleged to have sexually harassed Home Secretary Diane Abbott. This incident reportedly took place in a House of Commons bar, after Wednesday night’s vote to trigger Article 50 and leave the European Union. But rather than meeting it with outrage, the media has spun the incident as a case of comical Benny Hill shenanigans.

The incident between Diane Abbott and David Davis

The incident allegedly took place in a popular parliamentary watering hole called Strangers’ bar. Eye witnesses claim Davis leaned in to kiss Abbott, who recoiled and told him to “fuck off”. Davis then walked off laughing.

For those who might be sitting on the fence, let us be clear: this is what sexual harassment looks like. Many women have endured moments like this. In fact, a recent study found one in every two women in the UK has been sexually harassed in the workplace. And we know there is nothing funny about it.

The Express decided to recreate the incident as David Davis winning a cheeky victory over ‘sourpuss’ Diane Abbott. 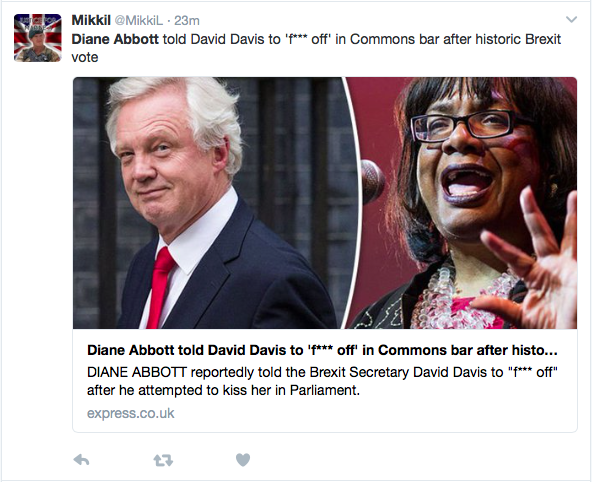 The Daily Mail followed the same pattern, exclaiming in mock horror that:

Shadow home secretary Diane Abbott launched a four-letter tirade at Brexit minister David Davis as he tried to kiss her in the Commons bar after she helped vote through the Article 50 bill.

The Sun, of course, also reliably stuck the boot in.

The Spectator, meanwhile, managed to turn it into a Mills and Boon tale of thwarted romance.

This paved the way for all sorts of knuckle-draggers to come out of the woodwork with their views on the incident. None of which were particularly kind to Abbott.

She never had a headache for #Jeremy, allegedly

I reckon Diane Abbott was asking for it.

Not everybody is a knuckle-dragging idiot

Imagine being Diane Abbott in that moment. You’ve had a hell of a day, then some smug creep comes over and tries to plant a kiss on you in front of your colleagues and the press. Then those gleeful spectators turn around and make you the asshole.

But thankfully, not everybody is a knuckle-dragging idiot. Those who have empathy for a woman being sexually harassed in her place of work came out swinging on her behalf.

Apparently David Davis tried to kiss Diane Abbott in the Stranger's Bar yesterday. This is sexual harassment; if true he must be disciplined

shouldn't that be "Diane Abbott resilient after attempted sexual assault by Brexit Minister in Commons Bar"?

Zero tolerance for sexual harassment should not be predicated on the ethnicity, religion, or political views of the person being harassed. It shouldn’t matter whether we love them, like them, or hate them. It is never funny. And a person acting to reclaim their physical space from harassing behaviour is not cute, funny, or rude. It is their most basic right.

– According to guidance by Citizen’s Advice, sexual harassment can include:

– If you or someone you know is experiencing this behaviour in the workplace, please advise them to follow the Citizen’s Advice guidance. They are not alone, and it is vital to hold those responsible to account.