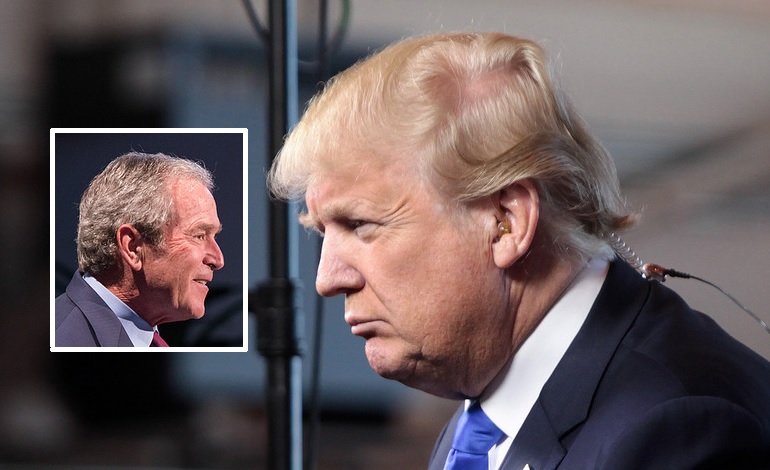 On 7 February, US President Donald Trump branded Iran “#1 in terror”. His accusation followed another by his Press Secretary Sean Spicer on 2 February that Iran had attacked a US naval vessel.

Spicer’s claim was false. And Trump used partisan evidence for his own accusation. But this concerted effort from Team Trump to vilify Iran affirms one ugly reality. The new administration appears determined to take out one of the seven countries targeted for attack in a memo by America’s Department of Defense in 2001.

After the Twin Towers fell

Ex-Army General Wesley Clark spoke to Democracy Now‘s Amy Goodman in 2007. In the interview, he recalled a conversation he allegedly had with a general at the Pentagon shortly after 9/11. He claims the general told him that an invasion of Iraq was going ahead. Clark continued:

I came back to see him a few weeks later. And by that time we were bombing in Afghanistan. I said: ‘Are we still going to war with Iraq?’ And he said: ‘Oh, it’s worse than that’… he reached over on his desk, he picked up a piece of paper… he said: ‘I just got this down from upstairs’ (meaning the Secretary of Defense’s office). ‘This is a memo that describes how we’re gonna take out seven countries in five years. Starting with Iraq, and then Syria, Lebanon, Libya, Somalia, Sudan and, finishing off, Iran.’

Obviously, the time frame of five years did not go according to plan. But George W Bush did “take out” Iraq in 2003. Barack Obama then helped to overthrow the Libyan regime in 2011 and destabilise the Syrian regime. And now, it appears that Trump has his sights on Iran.

Iran shares America’s stated desire to rid the world of what it deems “the greatest threat globally” – Daesh (Isis/Isil).

But Trump’s claim that Iran is “#1 in terror” comes from his country’s latest State Department report on global terrorism. Released in June 2016, the report designated Iran as the world’s top state sponsor of terrorism. It claimed that Iran had provided “a range of support, including financial, training, and equipment, to groups around the world” in 2015. These groups included Hezbollah and Hamas. The former is part of the Lebanese government. The latter is the government of Gaza. And both are vocal opponents of Israeli occupation and aggression.

The report also alleges that Iran supports other US-designated terrorist groups in Iraq and the Middle East. And the US considers the Islamic Revolutionary Guard Corps-Qods Force (IRGC-QF) – Iran’s special forces – a “primary mechanism for cultivating and supporting terrorists abroad”. A 2015 country report claims that Iran uses the IRGC-QF:

Yet the US special forces essentially fulfil the same function. Their operations “implement” America’s “foreign policy goals” of killing or capturing designated threats. These happen in concert with US intelligence services. And supporting those the US considers allies is part of these forces’ remit.

A threat to America?

At the same time, the numbers suggest that Iran is not a serious internal threat to the US. Since Trump’s ‘Muslim ban’ came into effect, banning the entry of citizens from seven majority-Muslim countries (including Iran), numerous breakdowns of terrorist activity on US soil circulated. Ex-FBI analyst Nora Ellingsen found that:

Since January 2015, the FBI has also arrested more anti-immigrant American citizens plotting violent attacks on Muslims within the U.S. than it has refugees, or former refugees, from any banned country.

In fact, by far the biggest perpetrators of terror within the US are white Americans, according to a 2015 study by the New America Foundation. PolitiFact also concluded:

The Atlantic provided a detailed breakdown, created by Cato Institute immigration expert Alex Nowrasteh. Between 1975 and 2015, Nowrasteh asserts, six Iranians committed or were convicted of attempting to commit a terrorist attack in the US. These attempts caused no fatalities. In stark contrast, 19 Saudi-born individuals launched attacks which resulted in 2,369 deaths – including those on 9/11. But Saudi Arabia is a US ally, and Iran is not. So it’s the latter which Trump considers “#1 in terror”.

In short, Iran presents only a tiny threat on US soil. And the “#1 in terror” claim is a Pentagon-made conclusion. One that Russia publicly disputed after Trump reiterated it. Others, meanwhile, have stated that it is in fact the US itself that is the biggest terrorist around.

Renowned scholar Noam Chomsky is a case in point. He points out that America’s definition of terrorism depends on whether it’s “theirs versus ours”. But he calls the US “the world’s leading terrorist state”. And he has noted that he’s not alone in that assessment. Speaking on Democracy Now in 2015, he said:

There also happens to be a world out there, and it has its own opinions. It’s quite easy to find these out from standard sources, like the main U.S. polling agency. Gallup polls takes regular polls of international opinion. And one of the questions… it’s posed is: Which country do you think is the gravest threat to world peace? The answer is unequivocal: the United States by a huge margin.

But the US government thinks differently. Why? Because Iran’s enemies, Saudi Arabia and Israel, are US allies. Because there is a barely reported conflict occurring over oil pipelines in the Middle East. And because Iran, while no beacon of human rights, does not bend easily to America’s will.

And, of course, there’s that damned 2001 list of countries to “take out”. A list that Trump appears to be following – whether consciously or not.

– Take action against militarisation with the Stop The War Coalition.

– See more on Donald Trump and Iran at The Canary Global.