Far-right poster boy joins Trump's cabinet, and this woman is silenced for exposing the skeletons in his closet - Canary 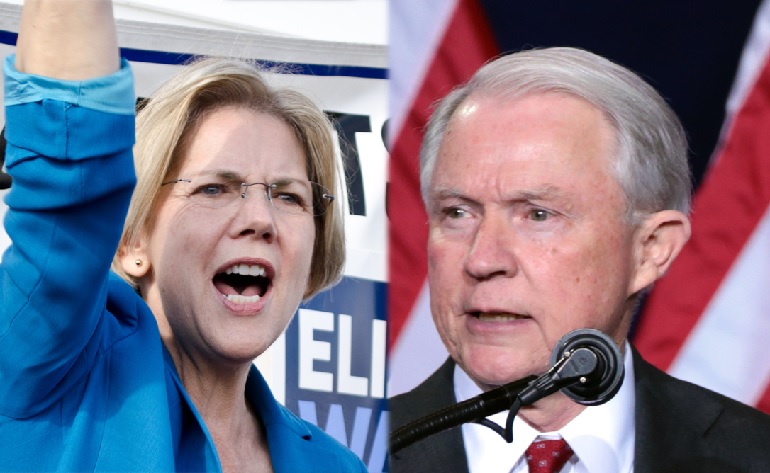 Far-right US Senator Jeff Sessions is now Trump’s Attorney General. But his confirmation process was so turbulent that one senator found herself silenced. Just for speaking about Sessions’ past.

Exposing the skeletons in Sessions’ closet

That letter, written by Martin Luther King Jr.’s late widow Coretta Scott King in 1986, accused Sessions of using his “awesome powers” as an attorney “in a shabby attempt to intimidate and frighten elderly black voters”. According to Rev Dr Barbara Reynolds, a close friend of King’s, the letter came at a time when Sessions was “prosecuting black people trying to help other blacks register to vote”.

But Warren echoing King’s sentiments was too much for the Republican-controlled Senate. So in a rare move, it voted to silence her for ‘impugning‘ a colleague.

Republican aides later claimed Warren’s punishment wasn’t only for reading the letter, but also for ignoring warnings and delivering a derogatory speech which went even further than King’s letter.

Accusations of racism have long followed Sessions around. And while he has insisted he’s “not a racist” or “insensitive to blacks”, the Southern Poverty Law Center claims he is indeed guilty of hate speech.

After the Senate silenced Elizabeth Warren on 7 February for pointing out Sessions’ past, others were quick to show solidarity. Senators Tom Udall, Sherrod Brown, and Bernie Sanders, for example, also read King’s letter aloud in the Senate. But without Republican resistance. Which led comedian Stephen Colbert to point out:

The Republicans are not saying: ‘hey, those aren’t the facts’, or ‘something has changed’, or ‘he did all those other things afterwards’. No. What they’re saying is: ‘You don’t get to talk about that.’

One voice silenced, another amplified

The Washington Post now fears that Sessions, in his new role, will:

In short, there’s now even more for America’s far right to look forward to in the coming months and years. And even more for progressive Americans to resist.