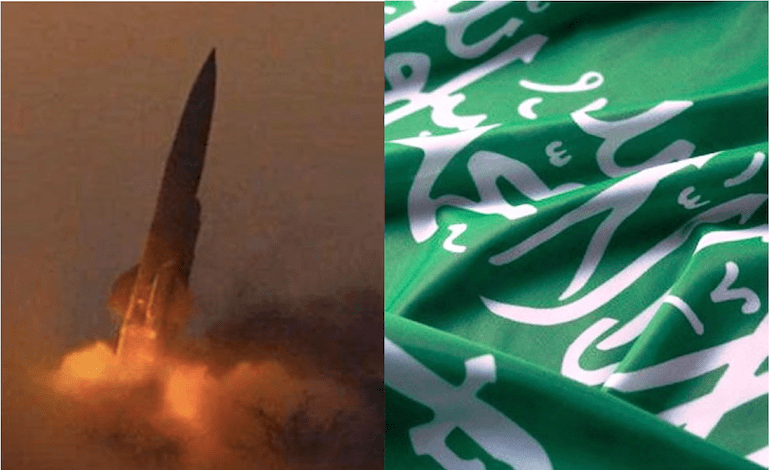 Some curious reports are circulating among Middle East and defence news outlets. They claim that a key Western ally in the Middle East has just come under attack. But the mainstream media has been very quiet about the events. Even though Associated Press wrote about the issue.

The Houthis claimed the attack and immediately called it a successful “revenge” strike:

in retaliation to the enemy American puppet that is Saudi Arabia’s continuous bloodshed and besiegement of the Yemeni people.

They made the announcement through the SABA news agency – the official news channel under their control. It was a warning to both Saudi Arabia and its allies that the Kingdom is within the reach of their Borkan-1 missiles.

But since the attack, Saudi official have avoided commenting on whether the strike hit the target as asserted. Middle East Monitor said that Saudi Arabia would usually comment if it had intercepted a missile. A lack of comment therefore suggests that Saudi forces did not intercept it. Though it could also mean the attack did not take place at all.

According to The New Arab, Saudi officials denied that a missile had hit its base. Some Saudis in Riyadh, meanwhile, apparently claimed that bangs and tremors in the vicinity may have been the result of an earthquake or meteor:

In spite of the difficulty in verifying the reports, the mainstream media’s failure to mention the Houthis’ newsworthy claim was curious.

As reported on 10 February, Saudi forces have now intensified attacks on the Yemeni port of Al-Hudaydah. This has raised new concerns at the UN for civilian lives.

Yemen is enduring a brutal civil war, with a disproportionate effect on the civilian population. A low estimate from the UN claims that the war has so far killed at least 10,000 people. And according to The Guardian, blame has fallen mostly on Saudi Arabia for the conflict’s civilian casualties. Saudi Arabia led an international coalition to intervene in the country and reinstate removed President Abd-Rabbu Mansour Hadi in March 2015.

Peace efforts have failed, and tensions have been rising between regional actors since US President Donald Trump’s ‘botched’ raid on an alleged al-Qaeda target. Especially since Trump has been trolling Iran and blaming it for Houthi acts against US and Saudi forces. While Iran has reportedly supplied weapons to Houthi rebels, the Trump Administration is deliberately conflating the rebels and Iran as one party and as ‘terrorists‘. This is something the Obama Administration refrained from doing.

The Houthi missile attack on Saudi Arabia, if true, could see further escalation, spurring the powerful Western ally to ramp up its efforts in Yemen.

But the legality of Western arms sales to Saudi Arabia – which the UK sells billions of pounds worth of arms to – has consistently come under scrutiny due to alleged violations of international law. So although both the UK and the US have been indirectly supporting the Saudi-led coalition, due to several aligned interests, continued action against the West’s arms trade with Saudi Arabia could well be key to fostering peace in Yemen.

Donald Trump, however, is currently on the war path with Iran, and is reportedly poised to approve arms sales to Saudi Arabia (which President Obama had blocked during his final months in office due to human rights concerns). So unfortunately, the Saudi-Houthi conflict may be about to get a whole lot worse.

Correction: An earlier version of this article contained an out-of-date tweet, which has been removed.

– Read The Canary’s other articles on Yemen at The Canary Global. Also see more on Donald Trump and Iran.

– Take action against militarisation with the Stop The War Coalition.