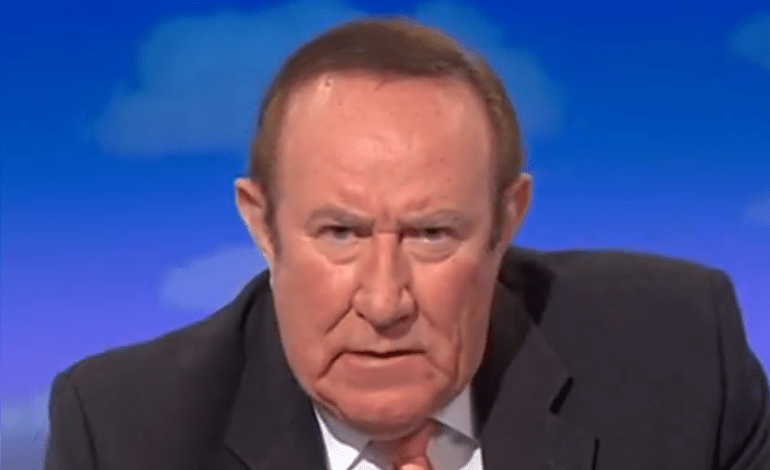 The BBC turned Daily Politics into what felt like an ad campaign for doing unpaid work for the Conservatives on 10 February.

Conservative-controlled Devon County Council has set up a scheme for constituents to do government work for free. All three of the guests on the BBC‘s flagship political show supported the unpaid labour scheme.

The scheme will get constituents to do government work, in this case, filling in potholes in roads for free. During an introductory film clip, the programme notes:

Volunteers already cut the verges, weed the pavements and grit the road.

After the film clip, the show moved into the BBC studio for discussion. All the guests, and host Andrew Neil, reframed the scheme as ‘volunteer work’. Nobody even called out the scheme for what it is: unpaid labour.

The wholly right-wing panel consisted of Conservative Bucks Council leader Martin Tett, Alex Wild from the Taxpayers’ Alliance, and The Economist’s Anne McElvoy. Tett remarked that the scheme is “interesting” and “worth looking at”. Wild agreed, saying it’s a “good idea”. That left McElvoy (an occasional Daily Mail contributor) to add a bit of balance. But, unsurprisingly, she said “that wouldn’t be a bad idea”.

Only the day before, the BBC told The Canary that it provides context so people understand the point of view of thinktanks. But the BBC provided no such context for the innocuously named Taxpayers’ Alliance. This is despite its strong links to the Conservative Party. Labour MP Jon Cruddas has said:

This is an arms-length Tory front operation run by big powerful business interests who want to remove themselves from paying tax by poisoning the well of public debate around the issue.

Nick Ferrari once asked the thinktank’s campaign manager, Susie Squires, if she was secretly Conservative. She said that was “outrageous”, insisting the organisation is “totally independent”. Since then, Squires has been the Conservative Party’s Head of Press, Press Secretary to the Prime Minister, and Special Adviser to Iain Duncan Smith. She remains the thinktank’s campaign manager.

On Daily Politics, Alex Wild of Taxpayers’ Alliance had no problem with people working for free for the government. Despite having already paid council tax.

The removal of context was the foundation of the propaganda. Shifting blame away from central government, the BBC kept its viewers in the dark about the ideological austerity behind the funding problems. As of 2015, the Conservative-majority government had cut council budgets by 40%.

At the same time, the government has money for all sorts of other ventures. For example, it secured Trident renewal. This has a lifetime cost of up to £205bn.

During the introductory film clip, there was one dissenting voice. Nigel Manners of Bradford Dangerous Roads Action Group said the council was “expecting free labour”, but that “we’re all paying our council tax”.

Meanwhile, the BBC presenter was enthusiastic about the scheme, saying “maybe I should do my bit too”, and “this certainly keeps you fit”.

In short, the Daily Politics segment represents the normalisation of unpaid labour. Tory austerity is taking us back to the Victorian ages. This is not only unchallenged by our public service broadcaster, but encouraged.