'Don't blame the PM', LBC show host says, blame our medics for the NHS crisis instead [VIDEO] - The Canary 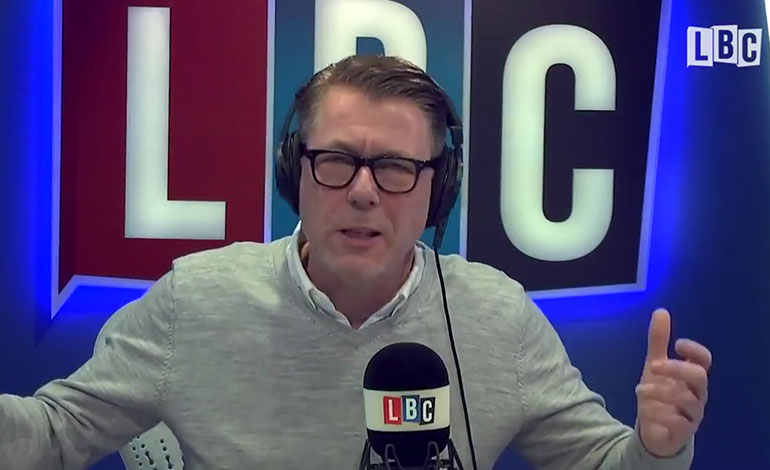 On 9 February, Ian Collins hosted his weekly late night radio show on LBC. This week’s section focused on the NHS and who was to blame for the ever increasing A&E waiting times. But despite the evidence pointing to the government’s mismanagement and the funding crisis, Collins decided to point the finger at another party. Our hard working medics.

Collins is known for addressing controversial issues on his programme. Previous topics have included child immigrants in the UK, problems with religion, and most recently Donald Trump. But in this recent episode, Collins makes a very bold accusation against the NHS.

Don’t blame the Prime Minister, blame the medics, those who haven’t got the bottle to challenge non-serious or alcohol-based incidents.

So what if you have to wait over four hours. When they talk about ‘Oh people have got to wait…’, it’s not like you’ve got an axe in your arm and you’re waiting over four hours. You’d be seen straight away. There is a procedure, a pecking order, if you like…

There’s not a crisis in A&E if it was used by the right people.

The NHS is certainly struggling to meet the four-hour wait target set by the government. But it’s not because of an inadequate “procedure”, as Collins suggests. He makes the grave mistake of pertaining to know the pressures faced by medics and doesn’t take into account the volume of people, the facilities available, or the amount of staff.

In December 2016, waiting times at A&E departments hit record levels, and more than 60,000 seriously ill patients spent more than four hours waiting on trolleys. January 2017 set another precedent and became the worst month in A&E history since 2004. As The Canary reported: “more than 780 people waited more than 12 hours to get a hospital bed, setting a new record”.

One key reason is that the NHS is treating more people. According to government statistics [pdf p3], “in 2016 there have been an average of 2,500 more attendances at major A&Es every day compared with 2015. That is a 6% increase”. Likewise, with an increase in population, and especially the older population (the amount of people aged 65 and over has increased by 21% since mid-2005), comes an increased demand for medical services. In fact, the rise in A&E attendance is closely linked to population increase, which is very consistent. There’s shouldn’t be anything unexpected about the numbers the NHS is having to deal with.

With more people, the lack of hospital beds has become a key problem. Something many health professionals have highlighted. Among others, the Royal College of Surgeons and the Chief Executive of NHS Providers have spoken out about the issue.

In an exclusive feature in The Guardian in 2015, one paramedic also revealed:

Because of NHS cuts, the public are being put in very dangerous situations; sometimes we are stuck outside a hospital with a patient, for instance, because there are no beds available. We are running on the bare minimum all the time.

Hospital visits for alcohol poisoning have increased, with the highest rate among females aged 15 to 19. In 2013/14, approximately 1 in 20 emergency admissions in England were because of alcohol. But how can he blame medics for treating such people? Surely the blame of the alcohol crisis lies with drinks companies, government regulation, advertising, and society in general. Right? As several studies in the US have shown, there is a strong correlation between alcohol advertising and youth drinking.

Likewise, as The Canary previously reported, the alcohol crisis is heavily linked to poverty. Rates of A&E admissions due to alcohol poisoning are nearly four times higher among those living in the 20% most deprived areas of England.

Despite the gravity of the situation, Theresa May is still unwilling to acknowledge the problem. Several high-profile figures have spoken out against May. Including the Chief Executive of NHS England, Simon Stevens, who admitted there was a clear funding issue in the NHS.

Instead of addressing the facts, Collins used his air time to hit out at hard working medics who “haven’t got the bottle to challenge” non-serious incidents. While Collins’ speech won’t be popular with the majority of NHS staff, it appears Jeremy Hunt’s got a new fan.