A homelessness campaign group has itself been left homeless, at the worst time possible [VIDEO] - Canary 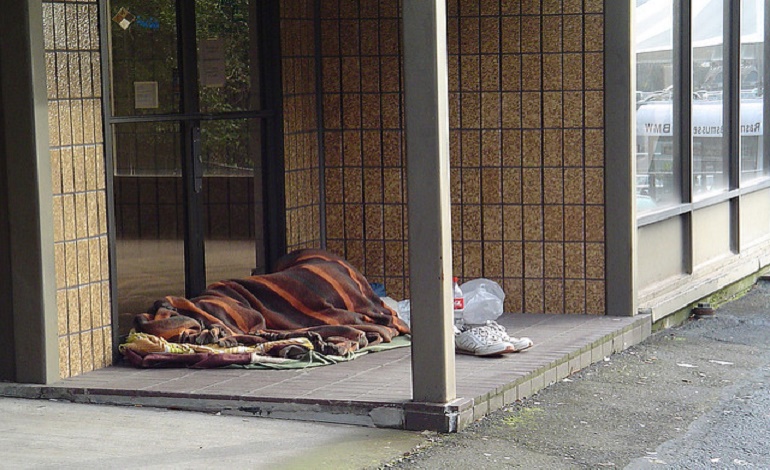 A homelessness action and campaign group is desperately seeking new premises after a council kicked it out of its former building. But the group is not taking the issue lying down. It’s still fighting for the thousands of people left destitute in the UK, in a very novel way.

At the end of January, Streets Kitchen, whose slogan is “Solidarity not Charity”, had to give up its premises in Camden, London. It was using an empty council building to store donated goods. The group, which provides food, clothes and other essentials for homeless people across London, now needs a new base.

Theo Blackwell, councillor for Gospel Oak in Camden, said the Labour-led council was committed to helping homeless people in the borough. But that the situation with Streets Kitchen was unavoidable:

In January 2016 we helped Streets Kitchen by providing some ­temporary storage space, rent-free, at the council’s Holmes Road depot. This was agreed with them on a short-term ‘meanwhile’ basis, but we need the space back at the end of the month to undertake planned building works.

We are very appreciative for how the council has supported us, but we are seeking permanent accommodation in Camden. We are looking for some stability, just like homeless people really. The fact we are worrying about finding ­somewhere to stay is affecting our work. We are also appealing to commercial property owners. If they are leaving their property vacant, why not let us use them? You will be providing a vital community asset.

Streets Kitchen is undeterred. On Saturday 11 February, it is hosting an event with the world famous club night G-A-Y to raise awareness of, and supplies for, London’s homeless.

The event, called ‘Clubbing for Homelessness’, is taking place at Heaven nightclub near Charing Cross. And the idea behind it is a novel one. People are being asked to bring donations for Streets Kitchen instead of paying the club an entry fee. Glakin told The Canary:

Streets Kitchen is not about making money out of homeless people. So that’s why we’re looking for goods we can actually give out. There’s a huge lack of emergency shelter beds for people this winter. And the emergency line StreetLink permanently goes to answer machine. We need to urgently address this situation, because people are dying on our streets. We know of at least 30 people, who were using our services, who died last year. And just last week, a young man called Alex died due to the cold weather.

Rough sleeping in England rose in 2016 for the sixth successive year. Outside of London, the number of people on the streets has risen 20% since 2015. And the area with the highest number of rough sleepers was Westminster. The same area where only this week it was revealed that Parliament’s alcohol bill topped £1.8m.

It’s a damning indictment that, while thousands of people are homeless on the streets, MPs and peers are pouring more alcohol down their necks. But with groups like Streets Kitchen continuing to fight, there is still hope for those finding themselves homeless in the UK.

– Find out more about the ‘Clubbing for Homelessness’ night.

– Read more from The Canary on homelessness.