A BBC host just tried to bully Ken Loach into accepting austerity, and she so lived to regret it [VIDEO] - The Canary 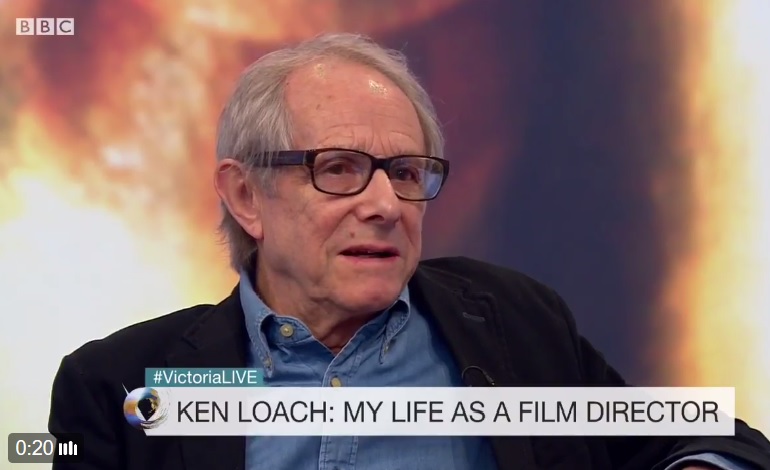 A BBC host just tried to bully award-winning film director Ken Loach into accepting austerity. In a discussion focused on his fierce opposition to the Conservative government’s benefit sanctions, the host suggested he might just be one of those ‘angry men’.

And my, did she live to regret it!

.@BBCJoannaG asks Ken Loach: Are you an angry man? pic.twitter.com/pwCxPWzkEd

The BBC‘s Victoria Derbyshire show featured an interview with the filmmaker on 10 February. And Loach addressed the subject of benefit sanctions, the focus of his latest film I, Daniel Blake. After talking about the film’s content and its accuracy, Joanna Gosling (standing in for Derbyshire) said:

There’s hundreds of thousands of people who would say the opposite. Iain Duncan Smith is responsible for destroying the lives of many people. He is responsible for putting a system in place that has led to suicide, that’s led to chaos in people’s lives.

Loach then detailed the rapid rise in food bank use during Smith’s “reign”, and said “he should hang his head in shame”. Gosling replied:

How can you say that he, sort of, is responsible for suicides? That is a strong claim to make. What is the evidence for that?

Loach, of course, makes that claim because the link between suicides and sanctions is certain. By 2015, the Department of Work and Pensions (DWP) had carried out 60 peer reviews into deaths of claimants. The DWP only carries out these reviews if it suspects a link between the death and its work. Numerous documented cases and studies have also shown a direct link.

I can quote you one example. Michael O’Sullivan lived in Camden, committed suicide, and the coroner said it was… partly due to the pressure from the DWP.

Obviously blindsided by Loach’s ability to provide evidence that crushed her defence of Smith, Gosling visibly searched her brain for a comeback. Eventually she retorted:

Are you an angry man?

Does Gosling think that only the eternally angry can be mad at politicians using taxpayers’ money to lead poor citizens to death? Or was she trying to belittle Loach’s specific concern over sanctions by painting him as someone who’s angry about everything?

Even worse, can she not comprehend at all why sanctions are causing anger because she feels no fury herself?

Perhaps the end of Loach’s time with the BBC‘s Derbyshire show speaks to that. After the filmmaker agreed it might be “a good idea” for him to rejoin the Labour Party, due to Jeremy Corbyn being an “extraordinary leader”, the issue of what he is most proud of arose.

Alongside his work, Loach mentioned his family. This was something that Gosling could get on board with. She commented:

And in the end is that what matters most?

And there it is – Maggie’s mantra. One that Loach immediately picked up on:

Well yes, of course. You start at the centre and work outwards. But we can use that as an excuse for avoiding social responsibility. I mean that was the essence of Thatcherism, wasn’t it? You matter, your family matters, to hell with everyone else.

Gosling said a lot of people would “take issue” with Loach’s definition of Thatcherism. And her nervous laughter at the very idea, combined with her clinical politician-defending approach to the effects of benefit sanctions, suggests she might be one of those that does.

But that disconnect between the BBC and the people who pay for its service is not exclusive to one presenter. It pervades the BBC. At present, the broadcaster too often functions as a voice for the powerful, some of whom are among its ranks.

If it is to deserve its public service label, the BBC must turn that completely around.

Editor’s note: This article was amended shortly after publication to make it clear that Joanna Gosling was standing in for Victoria Derbyshire.

– Take action against austerity with The People’s Assembly.