London Docklands has been taken over, and the message couldn’t be more serious [IMAGES] - Canary 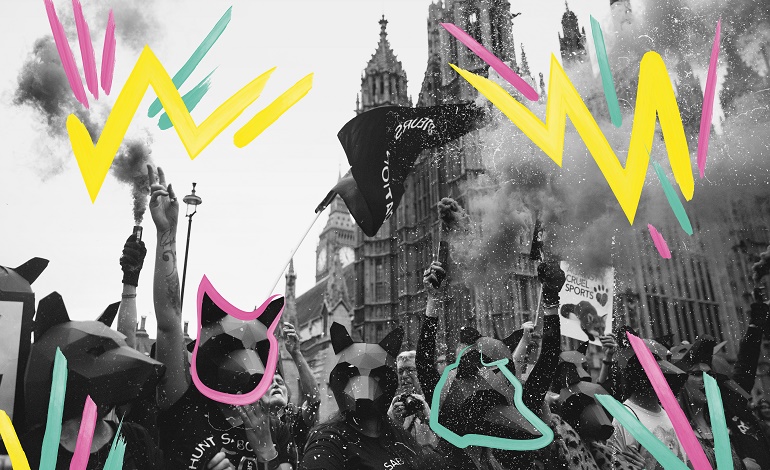 Cosmetics company LUSH has taken over Tobacco Dock in London for its annual two-day summit. The retailer has dedicated the space to campaign groups, charities, and other causes – giving them a platform to showcase the work they do. And some of the issues raised strike right at the heart of society.

The event, billed as bringing together “charities, speakers and grassroots organisations from around the world”, began on Wednesday 8 February. LUSH has split the venue into themed rooms for campaigns to use. The Conservation Room, for example, has an installation of plant life and natural wood, making the audience feel as if they are in the middle of a rainforest: 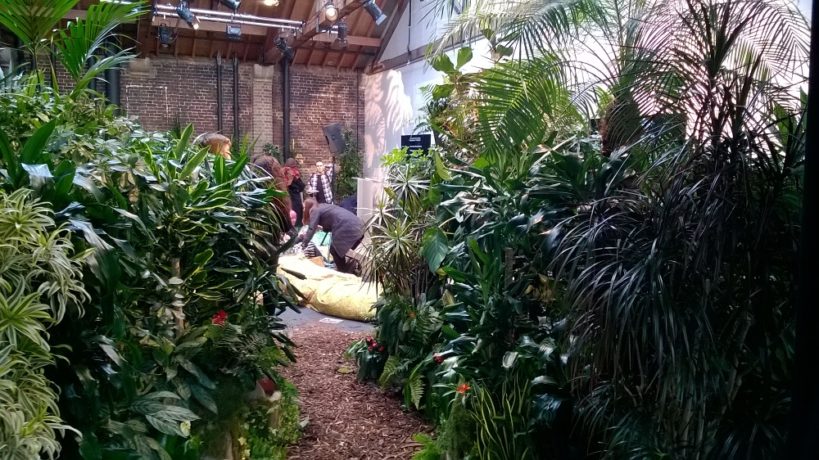 Other rooms at the summit include Human Rights, War and Poverty, Food Sovereignty and Climate and Energy. The latter is very well-designed. An interactive section allows you to walk through a house of the future. But it’s one where climate change, fossil fuel use and industrial pollution have spiralled out of control. The audience sees the pollution-infested air through the windows; hears the constant droning of machinery; smells the stench of our oil reliance in the air, and can, if they wish, taste the result of all this on our drinking water: 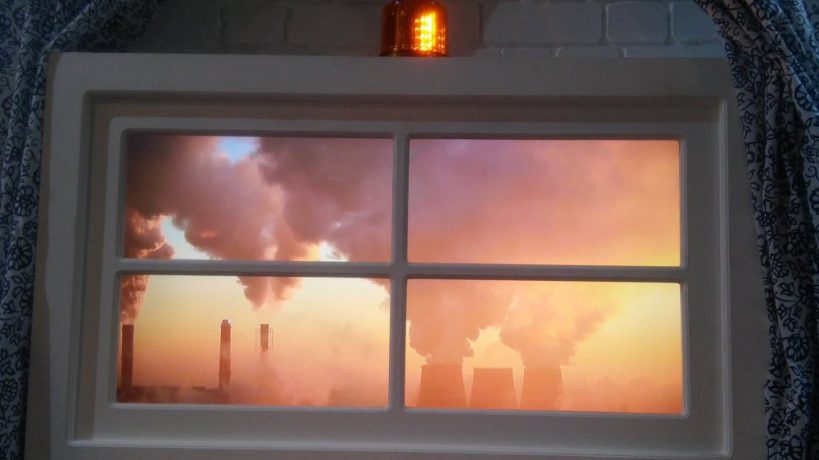 The summit plays host to many well-known faces in activist and campaign circles. The Frack-Free Nanas (aka the Frack-Free Creators) hosted a talk in the Climate and Energy room on 8 February. The group campaigns against shale gas extraction in Lancashire. It famously occupied a field at Preston New Road for three weeks, organising community events, workshops and protests against planned fracking in the area: 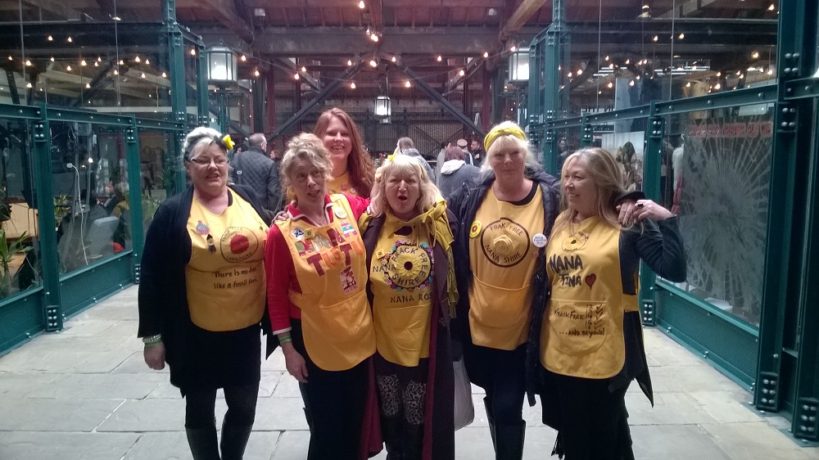 The Hunt Saboteurs Association has an interactive installation in the Animal Servitude room. The group, known for its combination of direct action and campaigning against fox hunting, told The Canary that the threat of the repeal of the Hunting Act is very real. But it believes that, with pressure from campaign groups, the media and politicians, the public will continue to support the act.

Other groups represented at the LUSH Summit include Movement for Justice; Reprieve; Tower Hamlets Food Growing Network; Bahrain Watch; Frack Off and We Are One Collective. And even US President Donald Trump put in an appearance: 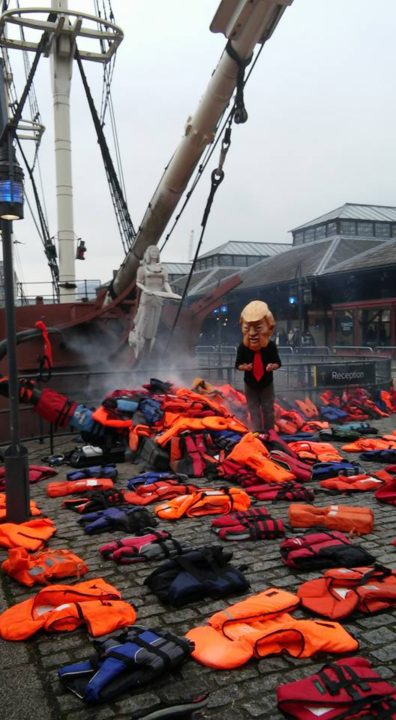 But the Human Rights Room is perhaps one of the most interesting. It features prominent activist groups like Disabled People Against Cuts (DPAC), Sisters Uncut and Radical Housing Network. The group Rockinpaddy is performing songs of protest. And an art installation from DPAC runs on both days, including work from Mary-Ellen Archer‘s Invisible installation: 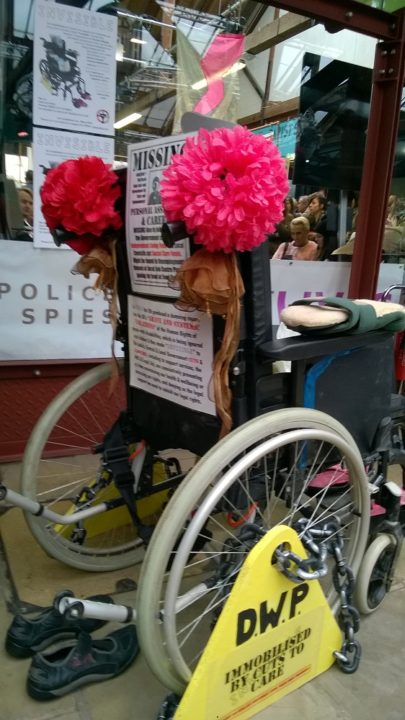 In the War and Poverty room, Refugee Community Kitchen serves up lunch to visitors. But the message behind the food is a stark one. Janie from the group told The Canary:

We’re here to promote the fact that we’re still feeding refugees in the camps of northern France. The jungle may have closed, but it just meant that people are scattered all over the place. A lot of youngsters are returning, as they still want to get to the UK. There are 1,200 people now in Dunkirk. We have a lot of smaller camps now, so logistically it’s much harder. Now it’s winter, conditions are bad. People are living in minus temperatures. Some of the camps are like mud baths. And there’s no help there whatsoever. There are so many vulnerable youngsters on the streets now. Some did come to the UK, but many then just got sent back. It’s an outrageous situation.

The group’s work at the LUSH summit came on the same day the government quietly axed the ‘Dubs Amendment’, which was allowing refugee children into the UK.

LUSH itself has a history of direct action and campaigning on issues relating to its business. The company famously dumped two tonnes of animal manure outside the EU parliament in 2006. Its protest was about the EU decision to allow up to 45 million animals to be used in chemical testing. In 2008, LUSH got performance artist Alice Newstead to hang herself from a shark hook in the window of its Regent Street shop, in protest over the practice of shark finning. And in 2012, LUSH caused controversy by getting performance artist Jacqueline Traide to graphically simulate an animal being tested in a laboratory.

The event attracted thousands of visitors on 8 February. And with a packed agenda for Thursday 9 February, a similar turn-out is expected.

It’s refreshing to see a major brand like LUSH giving so much space, and such a massive platform, to activists and campaign groups. But it is also, sadly, telling of the state of 21st century society that so many groups exist in the first place. The LUSH Summit is just one platform in a collection of struggles that are going on daily.

– You can still get tickets for Thursday 9 February. Entry is free.

Featured image via LUSH, and additional images via The Canary and Nicola Jeffery