BREAKING: John McDonnell announces a second Labour coup has begun, and who's behind it 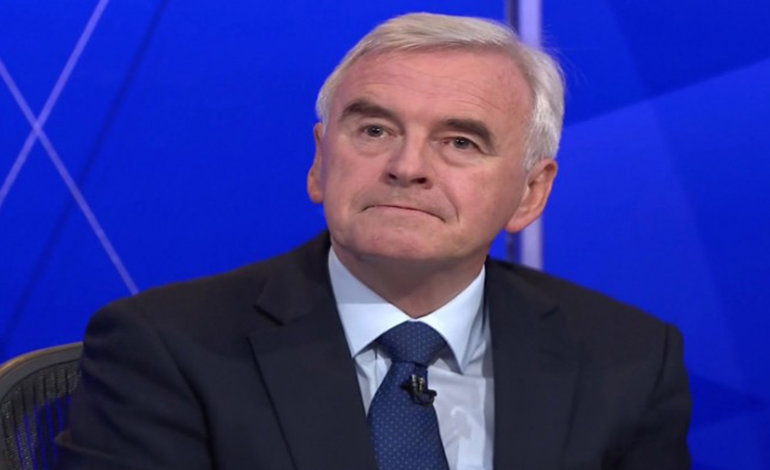 In an unprecedented move, Shadow Chancellor John McDonnell has written directly to Labour members to inform them that a second coup is underway. McDonnell claims that an alliance between Blairites, ‘moderates’, and the Murdoch press has formed to oust Jeremy Corbyn. He warns that unlike the botched coup of 2016, this time:

WE HAVE TO ALERT PARTY MEMBERS and supporters that the soft coup is underway. It’s planned, co-ordinated and fully resourced. It is being perpetrated by an alliance between elements in the Labour Party and the Murdoch media empire, both intent on destroying Jeremy Corbyn and all that he stands for.

The coup is not being waged up front in public but strictly behind the scenes. Having learned the lesson of the last coup attempt – that a direct attack on Jeremy and his policies will provoke a backlash from many party members – the coup perpetrators are this time round pursuing a covert strategy.

The aim of these covert coup plotters is to undermine the support Jeremy has secured among Labour Party members, and also importantly to undermine support from Labour voters. Undermining support for Jeremy from Labour voters is important to the plotters because their objective is to ensure Jeremy trails in the polls and can’t win elections. In this way they can destroy morale among party members and their confidence in him.

The tactics include daily and constant behind-the-scenes non-attributable briefings against Jeremy and his Shadow Cabinet every time he or his shadow ministers make a statement, intervene in Parliament or launch a policy. The plotters use every opportunity to chip away at Jeremy’s standing to seek to demean him and undermine support for him in the Labour Party and among Labour supporters. This constant barrage of negative briefings also crowds out any positive initiatives or narrative from Jeremy and his team. It also feeds and confirms in the public’s mind that the Labour Party is split. The plotters are effective in distorting the media coverage because they have extensive contacts and allies in the media, many inherited from Mandelson’s days. The professional planning of interventions in which attacks to undermine Jeremy are framed evidences an exceptionally well resourced ‘dark arts’ operation of the old spin school. The coup plotters are willing to sacrifice the Party at elections just to topple Jeremy and prevent a socialist leading the Party. It is more important to them that they regain control of the Party than it is to win elections.

The irony is that they are willing to go so far in denigrating Jeremy that they endanger their own parliamentary seats and endanger the very existence of the party they want to use to get into power. We saw the methods they use with the leaking of the Party’s internal polling. This was a carefully planned and executed operation. Let’s use it as a case example.

Both quantitative and qualitative polling is undertaken by the Party regularly under the direction of Jon Trickett, the Party’s National Campaign Co-ordinator. Jon arranged for one focus group to be carried out by the Party’s polling agency in Manchester to assess how our frontbench members appearing on television programmes at the time were being perceived in the north west. This polling took place back in November and its results were only accessible to a small number of party officials, Jon Trickett and the polling agency. To this day I have still not seen the results. The polling was leaked by someone to James Lyons, a Times journalist who has regularly received leaks from within the Labour Party – usually used to attack Jeremy and his team.

The Murdoch media had already run earlier in the week fake news stories in The Times and Sun alleging that Jeremy was planning to stand down as leader of the Party. No matter how many times it was explained that this story was completely untrue and absolute fiction, the The Times and Sun continued to run it – and the BBC and other broadcast media took it up and reported it extensively. The media then invented the story that the polling on the perception of Shadow Cabinet members in the north west was the Party testing the perceptions of potential successors to Jeremy.

This was a classic negative story framing and transmission exercise. It is just one example of what we confront on a weekly and at times almost daily basis. It is vitally important that our supporters understand and appreciate what we are facing. What we are experiencing is completely predictable and expected. Spreading that understanding of what we are up against enables us all to organise how we can fight back and overcome the soft coup strategy.

We all have an important role to play in explaining what we are facing and how, by standing together, we can defeat the plotters again. This is the testing time for the Corbyn transformation. The challenges are great and the times are tough – but we all know that this is the socialist opportunity of a lifetime.

McDonnell says his views have changed

Sources close to McDonnell have since claimed he wrote the piece a week before, in response to interventions by Peter Mandelson and other Blairites ahead of by-elections in Stoke and Copeland. The source claims McDonnell’s views have since changed. But whatever games are being played behind the scenes at Labour HQ, it can only detract from providing opposition to a government pushing through an austerity agenda at breakneck speed.

– You can join the Labour Party here.