The chairman of the Conservative Party told a barefaced lie on the BBC's Andrew Marr show, and no one said a word [VIDEO] - The Canary 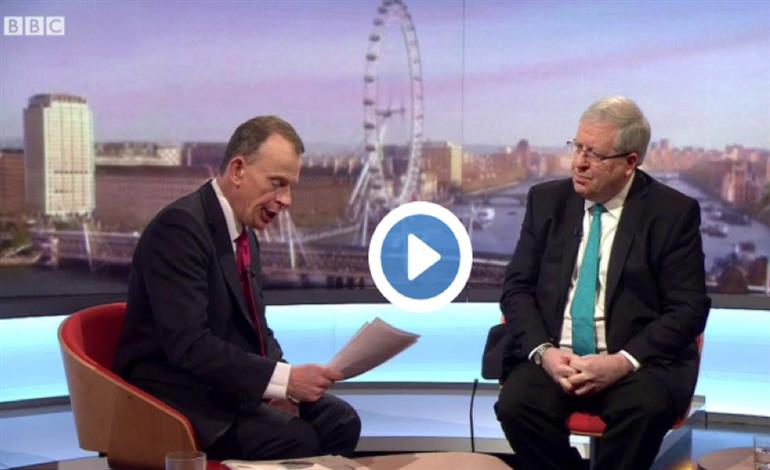 On Sunday 26 February, the chairman of the Conservative Party told a lie on the BBC’s Andrew Marr show. And the host failed to challenge it.

We’re spending, as a country, over £50bn a year supporting people who’ve got disabilities in this country.

So I think we give overall…very generous schemes

"As far as supporting disabled people, I think we do very proudly in this country" says @Patrick4Dales #marr pic.twitter.com/4JoxAuKPKE

Marr could have challenged McLoughlin on this, but failed to do so. After all, the United Nations recently found the Conservative government guilty of systemic human rights abuses against people living with disabilities.

As The Canary’s Steve Topple reported at the time:

On 7 November, the UN Human Rights Committee published its report [.doc] into the state of disabled people’s rights. This is the first time the UN has investigated a country for possible human rights violations against disabled people. The report looks at the effects of welfare reforms that the Coalition and Conservative governments have introduced since 2010 as part of their austerity programmes. And the UN is scathing in its condemnation of the government’s policies and treatment of disabled people.

As the UN agrees, the reality for people living with disabilities in the UK is far from McLoughlin’s version. The statistics can sometimes blind us to the very human consequences of policy decisions in Westminster. So here are some of the people caught up in the cuts.

Linda Wootton, 49, was on 10 medications a day after a double lung and heart transplant. She was weak and suffered regular bouts of blackouts.  She was put through the Atos Work Capability Assessment and as she lay in a hospital bed dying, she received confirmation she was ‘fit to work’.  She died nine days later. Her husband Peter said:

Brian McArdle, 57, had been left paralysed down one side, blind in one eye, unable to speak properly and barely able to eat and dress himself after a stroke on Boxing Day 2011. Despite this, he was deemed ‘fit to work’ by Atos. He died of a heart attack the day after his benefit payments were stopped. His 13-year-old son Kieran told the Daily Record:

Colin Traynor, 29, suffered from epilepsy. He was deemed ‘fit for work’ by the DWP after an Atos assessment and forced to enter a lengthy, bureaucratic process to appeal the decision – during which his benefits would be frozen.  He did not live to see the result of his appeal.  Five weeks after his death, his family received the news that his appeal was successful.  Too late for Colin. His father Ray said:

The same year, 10,600 sick and disabled people died within six weeks of their work capability assessment with Atos. According the government’s own figures, 1,300 of these people had been declared fit to work.

This is not just some occasional poor decision. This is a Linda, a Brian, or a Colin, dying in distress every day. And all because the Conservative government’s austerity programme is designed to throw people out of the social security system, whether they need it or not. It is this same system that the chairman of the party describes as “very generous”. And Marr left viewers none the wiser.

Support the work of Disabled People Against Cuts.