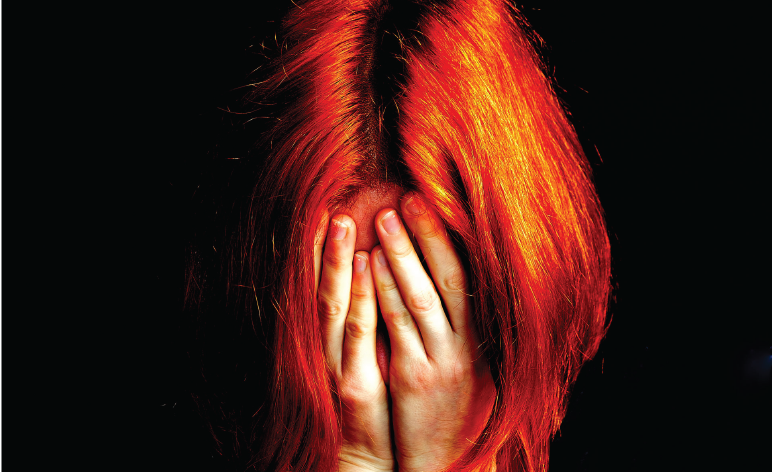 Several people have claimed that Department for Work and Pensions (DWP) assessors have asked people ‘why haven’t they killed themselves yet?’ The claims suggest this has generally been asked of people who have issues with or a history of mental illness.

It should be pointed out that these assessors work for Atos, which is a private company paid by the DWP. It should also be made clear that, while they meet the qualifications and experience requirements specified by the DWP and have some training, the assessors are not themselves mental health professionals.

The tweet prompted several people to reply saying that they had experienced the same thing. We have blanked out people’s identities rather than sharing tweets directly. Some of them are still being assessed, and are worried that speaking out may affect their claims: 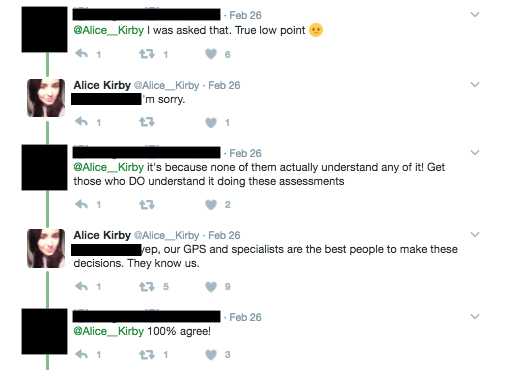 Kirby has released a press statement describing her own experience:

Cuts are costing disabled people their lives, but the assessments themselves can also put us at risk. They are designed to be intrusive and manipulative, and I wanted to raise awareness of that.

When applicants are asked questions like this, we are forced to explain our reasons to stay alive. No one should be expected to do that, especially in such a toxic and unsupportive environment. Assessors do not have the time or skills to explore the answers to this question with us, and they are not able to provide the support which may be needed afterwards.

This question was also completely irrelevant to my assessment, it had no impact on the outcome of my award and it wasn’t even referenced in the report. And so we must question the motives behind it.

These assessments are not safe, people are terrified of going through them, and many are traumatised afterwards. Government need to investigate the assessment process as a matter of urgency, and it needs to explain why questions like this are being asked.

The Canary contacted the DWP about these claims. They advised us to contact Atos, which is the private company that carries out assessments on the DWP’s behalf. An Atos Healthcare spokesperson replied as follows:

We are unaware of a complaint but we will investigate if one is made. Our role is to provide a well evidenced report based upon information obtained using the criteria laid out by Government. The professional and compassionate service we provide to claimants is our primary consideration.

This is not the first time that people have complained about DWP assessors asking them why they haven’t committed suicide yet. And if these allegations are true, it’s hard to understand what purpose asking this question would serve.

Atos says its PIP assessors undertake “thorough training, particularly on assessing those with mental health conditions”, and that experienced mental health professionals are available to teams to offer additional guidance and support when needed. But it’s one thing for a trained psychologist to ask such a question. It’s quite another for a non-mental health professional to have to deal with what could be a very complicated response.

And if this is how they are treating some of Britain’s most vulnerable citizens, then we may have more reasons to worry about the DWP than we realised.

– If you have had a similar experience, please contact the author at [email protected]