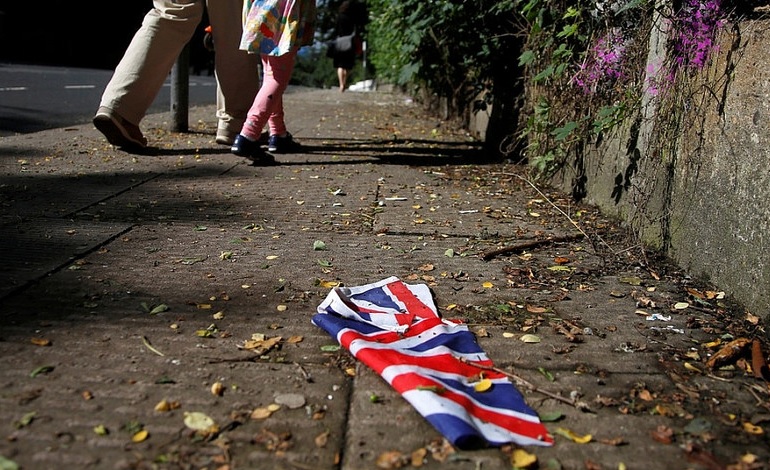 The Conservative government has apparently decided that Good Friday is the perfect time to completely bury the country. Because Northern Ireland Secretary James Brokenshire has laid down an ultimatum to parties in the country that could have far reaching consequences for the future of the UK. And the deadline is the Easter weekend.

Parties in Northern Ireland are currently negotiating to form a new power-sharing executive. The talks follow a breakdown in governance due to financially damaging mismanagement of a renewable energy scheme by the Democratic Unionist Party (DUP).

The expensive error, that came with allegations of corruption, caused a snap election after then Deputy First Minister Martin McGuiness resigned. And that election cost the unionists their majority in parliament.

Parties are now in their second round of talks after missing a deadline in March to come to an agreement. And while the two major parties in discussions are the DUP and Republican party Sinn Féin, the UK government is also at the table. As is Ireland’s government. But because Northern Ireland is a part of the UK, Westminster has a lot of control in Stormont. So Brokenshire has now laid down the law.

According to Brokenshire, parties have until Easter to reach an agreement. And if that doesn’t happen, the UK could force direct rule on the country. Brokenshire said:

The UK government would need to pass legislation to impose direct rule. Brokenshire did, however, say that his “Easter focus” will involve making decisions and introducing legislation that would allow the those involved to “get on with the job [and] get an executive back in place”. But he also said that the UK government would “start to make decisions about what further contingencies may need to be put into place” if such a situation wasn’t forthcoming.

So, the timing of Brokenshire’s intervention is loaded. And not only because of the significance the Easter period has in the country. Following the UK’s decision to leave the EU, most of its countries have made noises about independence in order to salvage a relationship with the bloc. Scotland is pushing for a referendum on the issue, Wales has also raised it. And Northern Ireland is no exception.

But Northern Ireland has a direct and already agreed route to independence from Westminster. Because the Good Friday agreement contains a clause allowing a vote on Northern Ireland’s reunification with Ireland if there’s evidence a majority of people support it. And Ireland is a member of the EU.

The UK government holds the power to call a border poll on reunification. But someone leaked a letter from Brexit Secretary David Davis to The Times at the end of March. And in it Davis said that if a united Ireland is supported by the majority, the UK government would “honour its commitment to enable that to happen”.

Sinn Féin has, in part, blamed the UK government for the lack of agreement in talks. Speaking on 5 April, the party’s leader in Northern Ireland, Michelle O’Neill, said:

O’Neill was referring to the legacy of the Troubles. And questions that the UK government has yet to answer over fatal incidents that happened during that period. Such as the Ballymurphy massacre.

Now the UK government appears prepared to add a new legacy if talks are not prosperous: a takeover of Stormont. But amidst disquiet in the country over Brexit, and a strong republican presence in its parliament, a move towards direct rule could be very consequential.

Because it could be the catalyst for Ireland’s reunification. And mark the beginning of the end of the UK.