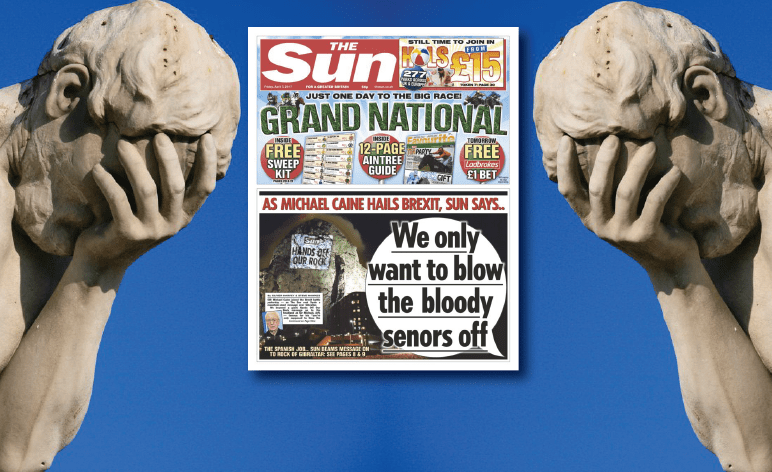 The Sun has been doing its best to make the UK a laughing stock as ‘global Britain’ prepares for serious negotiations. But even that most embarrassing of rags has outdone itself now. Because its latest front page isn’t just a hodgepodge of jingoistic nonsense. It also reads like The Sun‘s editor is attempting to solicit the Spanish citizenry. 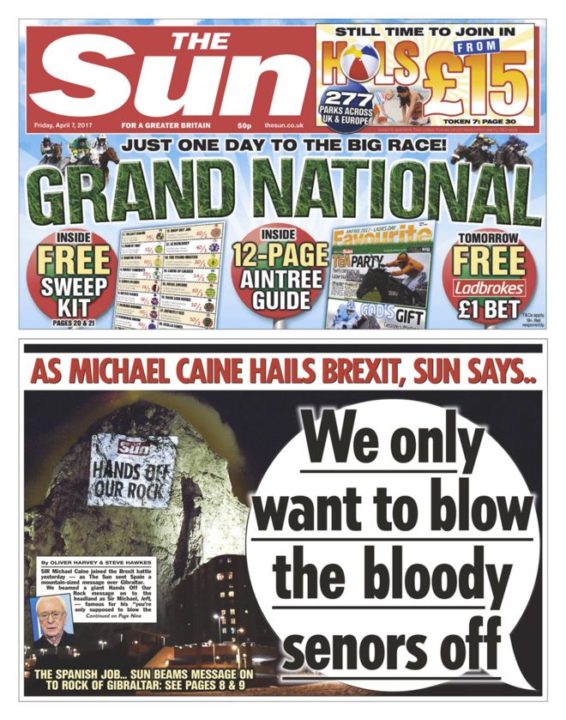 The Sun has form

On Tuesday 4 April, The Sun produced a front page that was emblazoned with:

And also came with a free poster that said:

HANDS OFF OUR ROCK

This was a continuation of right-wing posturing over Gibraltar that was started by Michael Howard. But it was somewhat let down by the fact that the paper was offering discount holidays to Spain on the same page.

The Sun say "up yours" to Spain and give away tokens for holidays there on the same page.
You even get a free poster for sheer stupidity. pic.twitter.com/4Enhkndmf6

Will it ever learn?

As you might expect, The Sun has once more failed to get its latest gaffe past the watchful eye of Twitter. Some people are just annoyed that the tabloid continues to think that ‘senors’ is a word:

For the second time, @TheSun, the plural of 'señor' is 'señores'.

Yes, you pride yourselves on your illiteracy in English… now Spanish too?

While others noticed the more glaring issue:

Editor: "Write it down"
Intern: "It sounds like we want to suck off spanish blokes"
Editor: "I SAID WRITE IT DOWN" pic.twitter.com/4Y8fDOT7Ft

Too late @TheSun … sexual favours won't help. Just let it settle and try not to overreact next time. pic.twitter.com/qziIOgLcuF

The front page references Michael Caine’s Brexit intervention. Which is somewhat unusual, as the tabloids had previously made it clear that the opinions of ‘luvvies’ aren’t valid when it comes to Brexit. The Sun quoted Caine as saying:

I voted for Brexit.

I’d rather be a poor master than a rich servant.

It wasn’t about racism, immigrants or anything, it was about freedom.

But in the very same article are pictures of the tabloid projecting the following onto the rock of Gibraltar:

Which is dragging us back to the sort of racially-charged stereotyping that most people today would cringe at.

And yet this is the message we are literally projecting onto the world as Britain prepares to ‘go global’. And as such, it’s no wonder that The Sun is attempting to find unusual means of currying favour with our Spanish neighbours.