BREAKING: Theresa May has called a snap general election. The battle for Britain is on [VIDEO] - Canary 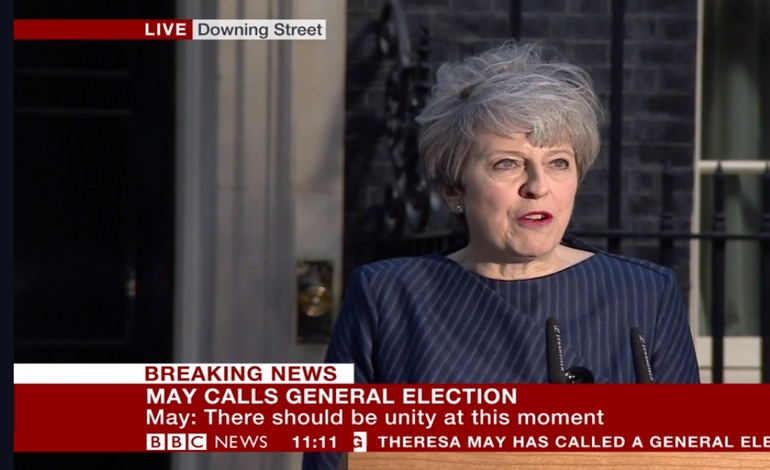 Prime Minister Theresa May has announced a snap general election. On 8 June 2017, UK voters will take to the ballot box to choose the party and Prime Minister to lead Britain through a second Scottish independence referendum, and our departure from the European Union.

Theresa May has called the election after a second poll during the Easter period showed the Conservatives with historic leads over Labour. The Prime Minster’s team clearly feels this is the optimum time to secure her mandate, prior to major battles ahead.

However, a recent rash of policies from the Labour team signals the first real battle for Britain in a long while. The prospectuses of the parties could not be more different.

Under Theresa May’s current economic plan, the poorest people in Britain will see their incomes shrink by more than 10% by 2021. The wealthiest, meanwhile, will see theirs grow by 5%. Labour’s plan would put a reverse gear on that expanding wealth gap.

In contrast, the Labour Party has found a way to give 5.6 million working UK citizens a much-needed pay rise, by raising the minimum wage to £10 an hour. In doing so, it could save the taxpayer £40bn in welfare paid to working people whose wages leave them in poverty.

Under Conservative austerity, nearly three quarters of teachers have reported students coming to school hungry. In parts of the country, teachers are even having to clothe and feed pupils whose parents are too poor to do so.

In answer to this, Labour plans to place a tax on private school fees to pay for universal free school meals for students at state schools. This would not only mean that children were guaranteed to be taught on a full stomach, but would also end the stigma associated with means-testing the benefit.

These are just two amid a rash of common sense policies that target the growing wealth gap. And they have struck a chord with the public.

But it’s not just on policy that May could face a tough battle.

Electing Theresa May as Prime Minister means rubber-stamping a hard, Tory Brexit from the European Union.

In order to protect Britain from the losses associated with leaving the single market, the May government has confirmed it would turn Britain into a tax haven – cutting corporation taxes radically to attract business. May has also campaigned to withdraw Britain from the European Convention on Human Rights, and has steadfastly refused to guarantee working people’s rights after Brexit. The rights that May is casually abandoning are the rights that ensure us all a minimum wage, maximum hours, and safe workplaces. They are the rights that all but ended sweatshop/workhouse conditions in the UK. Yet these rights may well end up on the chopping block as May courts corporations to stay in the country.

Theresa May has performed poorly on diplomacy. Her reluctance to meet and work collegiately with fellow political leaders in the UK is now threatening to turn Brexit into the break-up of the United Kingdom.

The Prime Minister forgot to tell Scotland about her decision to trigger Article 50. We would expect that the commencement of the two-year countdown to leaving the EU would have been discussed in detail. But the Scottish First Minister and her colleagues in Holyrood found out as they watched BBC News.

May also placed an ill-advised column in The Times, calling Scotland out for holding a referendum. Given May’s performance on Brexit, it was widely derided as one of the most tone-deaf communications from a Prime Minister in some time.

This was one example among many of Prime Minister May seeming to bait Scotland, rather than negotiate. But Sturgeon is a popular leader, viewing polling that states independence is more popular than ever. She is unlikely to be moved by the swinging handbag of a placeholder Prime Minister.

Then, during a UK tour which took in Scotland and Wales, May decided to snub Northern Ireland. The timing of the blunder could not have been worse. In its own recent snap election, Northern Ireland elected the greatest number of Republicans in its history. The existing power-sharing agreement was in tatters and key Republican figure Martin McGuinness had just died. There were rumbles of discontent from all sides, and real potential for an independence referendum and the renewal of hostilities. And the Prime Minister bypassed the nation entirely.

In the forthcoming election, voters will have a chance to reflect on recent humiliations. The sight of May curtsying like a choir girl for President Trump. The hypocrisy of May selling arms to the head-chopping dictators in Saudi Arabia, while refusing to allow child Syrian refugees to claim sanctuary in Britain. And they will have to ask themselves a question: what kind of country do we want to live in?