We need to talk about The Sun, because the tone it just set for the general election is fucking appalling [IMAGE] - Canary 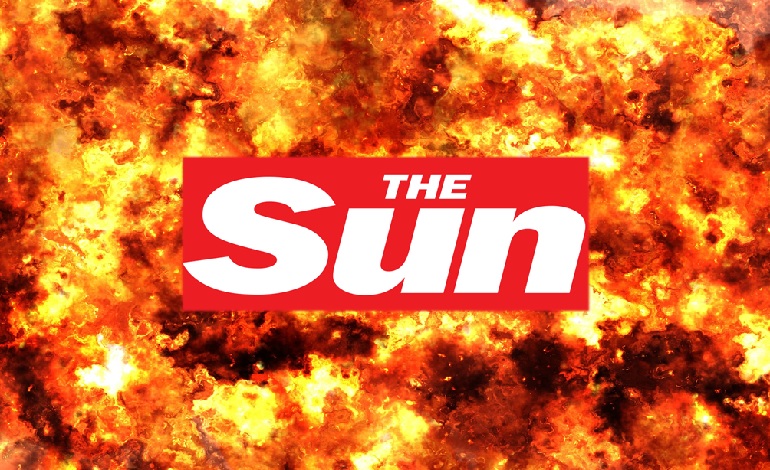 Once again, Britain needs to have a very serious conversation about The Sun. Because the tone it just set for the 2017 general election was f*cking appalling.

On 19 April, The Sun set its tone for the 2017 general election. It reacted to Theresa May’s election announcement the previous day with a front page that wouldn’t have been out of place in Turkish state propaganda.

Treating the upcoming vote like a battle between Middle Age crusaders and a hell-born horde of zombies, the paper bellowed: 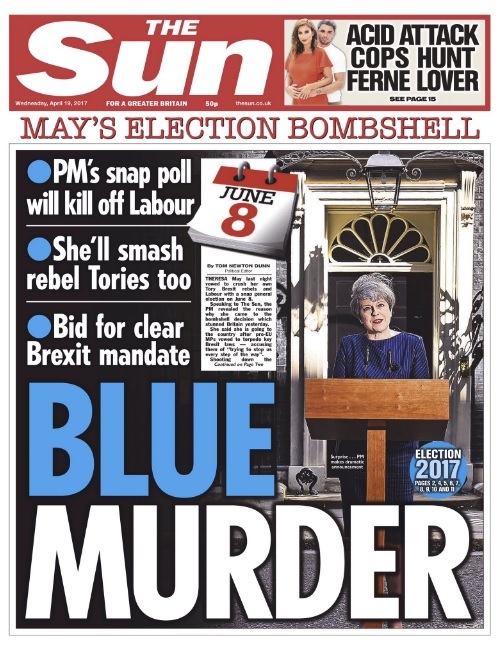 With talk of “MURDER” and ‘killing off Labour’, The Sun made its stance clear. This is war. And there’s no doubt about which side the paper’s on.

But appalling as this language was, in the context of Labour MP Jo Cox’s murder in 2016, it has become symptomatic of the pro-Tory media today. For example, right-wing rags didn’t only seem to make excuses for the terrorist who murdered Cox. The Mail on Sunday even published a piece just days after the attack which said Labour needed to “kill” its leader, Jeremy Corbyn.

Now, The Sun is setting the worst possible tone for the 2017 general election.

Britain has one of the most concentrated media environments in the world, with just three companies controlling around 71% of national newspaper circulation. And media mogul Rupert Murdoch’s News UK controls a third of those newspapers. Murdoch – owner of The Times, The Sun and Sky News – has backed every single election winner since 1979. And 80% of the audience share in broadcast media goes to either Murdoch or the BBC. So it was always important for Theresa May to get his support.

Accordingly, May had an ‘off the books’ meeting with Murdoch in September 2016. And ever since, their relationship has blossomed.

Murdoch has been getting more face time with the Conservative government than any other media proprietor. He has met with the Prime Minister or Chancellor no fewer than 10 times in the last year. And Theresa May hasn’t sought to hide this close relationship. She snubbed the BBC to grant her first interview of 2017 to Sky News. And she even penned pro-Brexit and anti-independence columns for The Times and The Sun.

The Sun hasn’t hidden its love for May either. One editorial in January said May’s Brexit vision was “so close to ours we couldn’t have written it any better”. And as the front page above suggests, the disgraced Murdoch rag is set to be one of the Conservative Party’s main backers in the upcoming election campaign.

This is not OK

The UK’s corporate media monopoly means that moguls like Murdoch can run amok over British democracy, holding politicians to ransom. And if these don’t deliver policies favourable to the press barons, they receive awful treatment – from publications that reach millions of voters.

Labour leader Jeremy Corbyn, however, has proposed breaking up media monopolies. This would help to bring about a more meaningful democracy in Britain. It would give voters a greater access to information from independent sources. With this in mind, it’s no wonder that The Sun relishes in the thought of Theresa May ‘killing off’ Corbyn’s Labour.

For a healthy democratic debate – about really important issues like the NHS, housing, education, wages, childcare, public transport, and foreign policy – we must not allow right-wing rags like The Sun to dictate the tone of the 2017 general election.

Instead, we must ask ourselves and all of those around us: what kind of country do we want to live in? The Sun‘s vision – a Tory-made tax haven backed by hatemongering tabloids and built on deteriorating living standards for ordinary workers? Or a hopeful alternative vision – ditching the failed Tory austerity regime and putting the NHS and other key public services first?

The choice is clear.

– Firstly, register to vote if you haven’t already. Then discuss the key policy issues with family members, colleagues and neighbours. And organise! Join (and participate in the activities of) a union, an activist group, and/or a political party.

– Also check out the Media Reform Coalition. And support the independent outlets at the forefront of the ongoing media revolution: