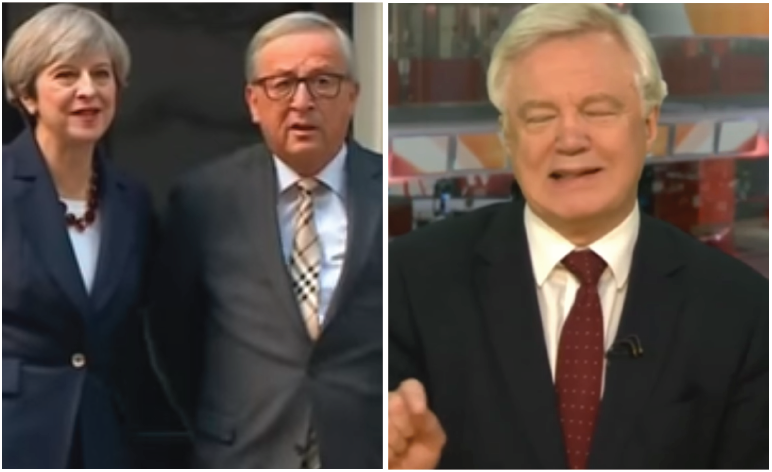 Theresa May has been left embarrassed by reports of a disastrous meeting with the European Commission’s President Jean-Claude Juncker. A meeting in which she attempted once more to insist that trade talks could take place alongside Article 50 negotiations. This meeting led to Juncker allegedly telling German Chancellor Angela Merkel that May was “deluded” and from a “different galaxy”. A day after Juncker was supposed to have said this, Merkel confirmed her commitment to the EU’s preferred negotiation timetable:

I have the feeling that some in Great Britain have illusions about this. But that’s a waste of time.

But Theresa May isn’t the only politician to have shown her ignorance. David Davis has also shown his incompetence. And his ineptitude is a problem for all of us, as he’s the Secretary of State for Exiting the European Union.

In the meeting with Juncker, Davis spoke about the success he had arguing against proposed surveillance laws in the European Court of Justice. Commentators see this as being something of a faux-pas, as the surveillance laws were proposed by his boss, Theresa May. The very person who had called Juncker there in the first place.

4) May seemed pissed off at Davis for regaling her dinner guests of his ECJ case against her data retention measures – three times.

Davis also claimed that the EU cannot force us to pay an exit bill. A claim which prompted the exact same response we keep hearing. That if we refuse to pay the bill, there will be no trade deal. A situation which could present several problems for us.

20) …leaving EU27 with UK's unpaid bills will involve national parliaments in process (a point that Berlin had made *repeatedly* before).

This incident is hardly a blip on an otherwise spotless record, however. As Politico‘s Brussels Playbook stated, it:

hears that some EU Brexit officials think Davis is so flimsy it is pointless negotiating with him. Until the U.K. election was called, they were dreaming up ways to get him away from the negotiating table. Options, according to Playbook’s source, were said to include substituting the EU’s deputy Brexit negotiator Sabine Weyand in for its chief negotiator Michel Barnier, as a way to give the Brits a graceful way to replace Davis. Now the hope is simply that he’ll be sacked on June 9.

May has talked at length about her “strong and stable leadership”. She has also said that voting Tory will [paywall] “strengthen her hand” in the coming Brexit negotiations. But it’s difficult to see what could possibly strengthen a hand this weak. She is clearly playing with a handful of jokers. And the biggest joker of them all is the Brexit Secretary himself.