For much of the general election campaign, Theresa May has been in hiding. But new accusations reveal that she is so worried about real people finding out when she’s speaking that one appearance was booked as a children’s party.

The most disappointing children’s entertainer. Ever.

Theresa May spoke at an event at Crathes Village Hall in Aberdeenshire. Like similar events in Leeds, local people were not informed of May’s visit.

Local resident Kevin Newell wanted to put some “serious questions” to the PM. But he discovered that her time at the village hall was booked out as a children’s party.

A screenshot from The Independent shows the booking: 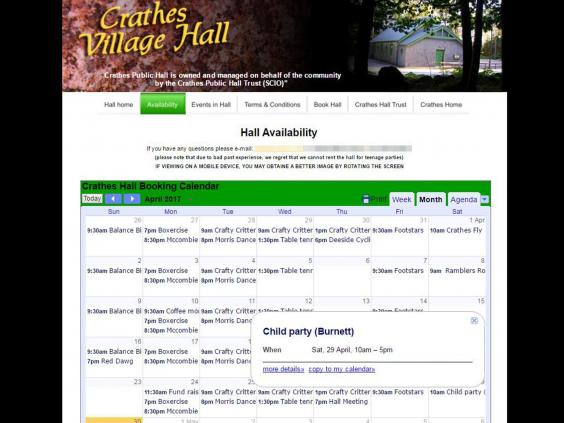 The hall’s website calendar has since been updated to say that the hall was “busy” at the time May attended.

Politics only for the party faithful

It seems that May’s political appearances are only for the party faithful. Newell derided the PM’s secrecy as “pathetic”. He also said:

It’s been so secretive, they are supposed to be holding these big rallies but all she’s doing is hiding in little village halls, not saying they are going to be there. So there’s no one apart from local Conservative activists standing there and boosting her ego even more.

And tweets backed up this point of view:

Theresa May visited a small village hall in Crathes, Scotland, and snuck in the back door to an invited audience. #fightingspirit #GE17

What are you hiding from?

Serious questions need to be asked about what May is hiding from. It could be because the government’s record on pretty much everything is pretty indefensible. For example, when questioned by Andrew Marr about the fact that nurses are being forced to use food banks, she fumbled and could only come up with the fact that there are “complex reasons” why people use food banks.

But in front of party loyalists, she can repeat her “strong and stable” mantra. And they’ll lap it up. Or they’ll pretend to. Either way, the choice is a simple one. Vote for a woman who is so secure in being “strong and stable” that she refuses to meet the public. Or vote for a party that genuinely wants to create social change.

The Canary contacted the Conservative Party for comment but did not receive a response by the time of publication.