Jeremy Corbyn spoke to headteachers. And they gave him a standing ovation [VIDEOS] - The Canary 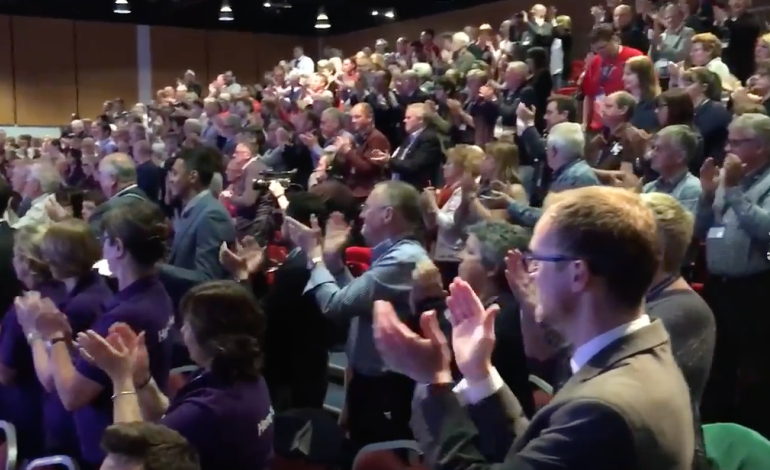 Jeremy Corbyn received a standing ovation when he addressed the National Association of Headteachers (NAHT) – a conference which Education Secretary Justine Greening refused to address. And their response shows exactly who headteachers would prefer to be in charge of our children’s education.

Corbyn echoed NAHT in his comments on education:

The NAHT has correctly pointed out that this election is make or break time for our children’s education system.

He also asked some clear questions:

Is this how we want to treat the education system of our children?

Is this how Britain’s children deserve to be treated?

Do our children deserve to be held back by a chronic shortage of teachers?

Do our children deserve to crammed into schools like sardines?

Do our children deserve to be taught by teachers whose morale is at an all-time low?

But Corbyn also answered those questions, laying out ways in which Labour would change the education system. These included universal free school meals for primary children, boosting access to the arts and arts-based subjects, and re-introducing the Education Maintenance Allowance.

And he was adamant in his opposition to grammar schools:

Not only does the mass introduction of segregation in our education system not help the overwhelming majority of this country’s children, it also returns us to what are frankly Victorian notions of education based on a narrow curriculum.

As well as in his commitment to children’s mental health:

We must prioritise the mental wellbeing of our children. This is the least they deserve. It is vital that we enable early intervention and provide support when problems first emerge but to do this we must build an education system that integrates social and health care.

Under the Conservative government, schools have seen massive cuts to their budgets. As Corbyn pointed out:

As all of you will know, the National Audit Office confirms that schools are facing a cut of three billion pounds in real terms by 2020, the first real terms cut in education budgets in a generation.. Schools across the country face real terms cuts in funding per pupil, and class sizes are rising – while those young people who want to go to university face huge debts.

How can it be right that money is being siphoned straight out of our children’s schools and directly into the pockets of the super-rich?

Meanwhile, the Conservatives have come up with a range of excuses for their failings in education:

The excuses from the government come thick and fast. They’ve blamed teachers for not working hard enough, they’ve diverted funds to their vanity projects. £138.5 million wasted on schools that have closed, partially closed or never opened in the first place.

You can watch part of his speech here:

This is the response Corbyn received:

Headteachers have spoken. Their standing ovation for Corbyn’s speech tells us what we all need to know. Our schools are in crisis. And while our children cannot vote, we can. And we have the chance to give them all better opportunities and a better future.