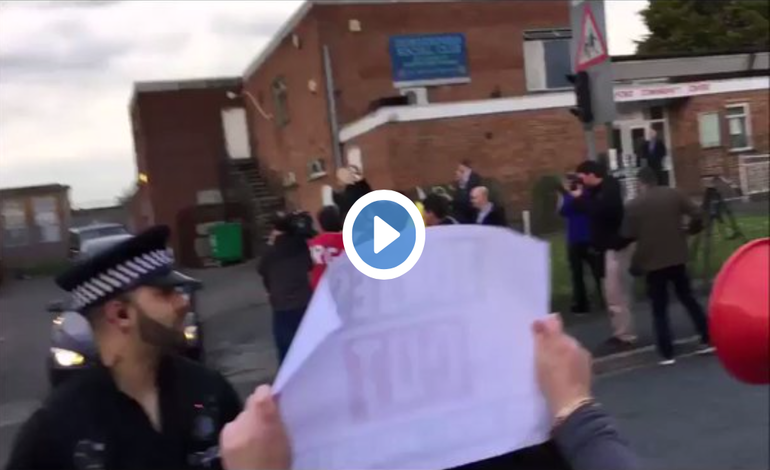 The Prime Minister arrived for a surprise visit in the south-west city of Bristol on 2 May. Once again, it was an invitation-only event. But this time, word got out to the uninvited, and they arrived to make their presence felt.

May’s campaign events have barely enthused the invitation-only guests, let alone the country. The stream of images on the campaign trail show one empty factory after another. So some bright spark stitched together the images into a North Korean style propaganda video.

Today #KimJongMay made glorious visit to workers of North Derby factory. All praise our strong and stable leader!!! pic.twitter.com/o2Q7iWTn9O

So far, May has almost exclusively attended events with prepared audiences. With ordinary folk kept away from view.

But even with this level of control over the guest list, her audiences still looked like they’d arrived in blindfolds and handcuffs.

May’s stage-managed campaign approach did not go down well in Bristol. Remember, this is the town that held a riot when someone tried to put a Tesco on Stokes Croft. We’re a hearts on sleeves kind of a place.

So when Bristolians found out about the clandestine campaign event, they sped to Hungerford Road in Brislington. The residents were keen to give the PM an authentic taste of real campaigning.

Chanting “May out, Corbyn in”, the people of Bristol made their presence felt at the event. The PM made no acknowledgement of the crowd. Running straight to her vehicle, she was promptly whisked from the event at speed.

Local people not happy at being left outside as Theresa May attends an invite-only meeting in Brislington #GE2017 pic.twitter.com/nAmeOzJH9o

The PM made her trip to Bristol because the Conservative Party is targeting the seat of a popular Labour MP. Kerry McCarthy has held the Bristol East seat since 2005, but her majority in 2015 was only 3,980. The Conservatives are hoping to use McCarthy’s pro-EU position to convince voters in pro-Brexit Bristol East communities to vote her out.

However, they still have no candidate. And the Prime Minister’s tick box exercise did not go down well with locals. UNISON Bristol branch secretary Jane Carter told The Bristol Post:

The Prime Minister is dodging hard questions from Bristolians because she doesn’t have the solutions.

People want serious answers to the questions that keep them up at night – how to afford the rent, look after family, and earn a decent wage.

If Theresa May has the answers she ought to tell us, and if not then it’s time for her Government to go on June 8.

A local Conservative councillor seemed to underscore his party’s distance from the public mood by calling his own constituents ‘idiots’.

If the Prime Minister cannot face the communities she governs over in the run-up to a general election, what hope is there for afterwards?