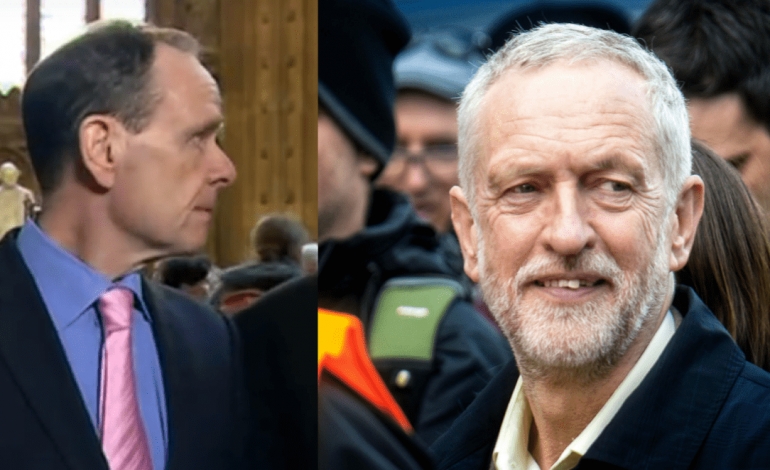 The Tories have launched a scathing attack on Corbyn with their latest piece of propaganda. Their anti-Corbyn advert reads “Corbyn: No bombs for our army. One big bombshell for your family”. And on a picture of a bomb is written: “More debt, higher taxes”.

And there’s no denying where the BBC stands on this attempt to smear Corbyn. Because Political Editor Norman Smith was quick to share the advert on Twitter.

The poster is accompanied by text claiming that there’s a £45bn gap between Labour’s spending plans and the revenue it would raise. Of course, the advert hasn’t gone unnoticed by Labour, which has described it as “yet more nonsense” and “desperate”.

Labour MP John McDonnell appeared on BBC Radio 4’s Today programme and said the Tories are blatantly lying with this claim. Because the £45bn in question includes £35bn of capital spending. McDonnell said:

I’m amazed the chancellor of the exchequer can’t distinguish between capital and revenue spend. Capital spend does not come out in terms of individual revenue spend. It is just the cost of the borrowing that comes out.

But has Chancellor Philip Hammond really just been careless in analysing Labour’s spending plans? Or is he, and his party, playing dirty tricks? Given the Tories’ track record of lying to the public and pushing anti-Corbyn propaganda, it could easily be the latter.

But Norman Smith is not an outlier at the BBC. Tory propaganda permeates the organisation as a whole. As McDonnell said:

I’m shocked that the BBC has just taken a Conservative press release and has repeated it all morning. You’re the BBC, you have to have some form of analysis before you put something on air.

But we can hardly expect fair or measured analysis from the BBC. As The Canary previously reported, a journalist told BBC Radio 4 host Nick Robinson to “step down” after he took his anti-Corbyn rhetoric to the extreme. Meanwhile, political editor Laura Kussenberg routinely advances Tory propaganda.

The relationship between the Tories and the BBC looks cosier than ever. We might not be able to disentangle these bedfellows. But we can oppose their propaganda by being aware of it, exposing it, and showing how it easily crumbles under analysis.