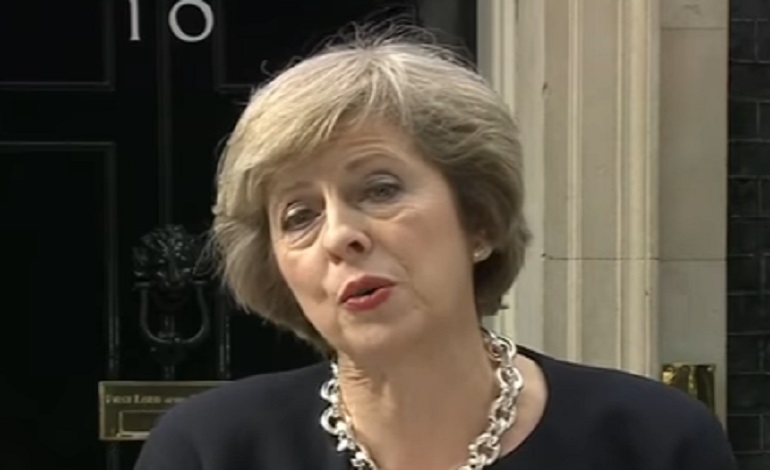 As The Canary reported on 28 April, the scandal centres around a private investment firm called IPGL, run by former Conservative Party Treasurer Michael Spencer. In October 2008, HSBC made [pdf] a £214.2m loan to IPGL. But at the time, IPGL was in financial difficulties, with one of its subsidiary companies (a betting firm called City Index) reporting [paywall] £43m losses. So Spencer had to put in £70m of his personal £1bn fortune to bail out the failing company.

The Canary went to HSBC’s annual general meeting on 28 April. Fionn Travers-Smith of Move Your Money from the event explained why this story is so important (video provided by a campaign group):

But the PM is facing yet another political problem with HSBC. Because as whistleblower Nicholas Wilson has detailed, May could have a potential conflict of interest regarding her husband and the bank.

May’s husband Philip works for US investment firm Capital Group. The company closely advises HSBC, just recently helping it establish its first branch in Hong Kong. So when it was announced that HSBC had been selected to advise Saudi Arabia on the sale of its state oil company Aramco, Wilson looked into this.

And he found that, in April 2017, Theresa May had gone to Saudi Arabia and had a meeting with Aramco Chairman Khalid Al-Falih. But also, only one British businessman attended any of May’s meetings in Saudi Arabia. He was Sir Xavier Rolet, the CEO of the London Stock Exchange. Wilson told The Canary:

It seems obvious to me that the PM is simply lobbying in secret on behalf of her husband, Phillip. But also for HSBC and the London Stock Exchange. And, of course, the Tory Party. Serious questions need to be asked.

is a very serious and deeply worrying case, suggesting that a major bank and a business customer have been involved in activities serious enough to warrant criminal investigation… There must be an investigation into this and before the general election of 2017.

He has since written to the Electoral Commission about his concerns:

Labour MP John Mann also echoed Mullins’ sentiment. He said that it was “the biggest party donor scandal ever”. And he told The Canary:

May said in her first speech as PM that she would “govern not in the interests of the privileged few”. But the Tory dirty money scandal, and May’s potential conflict of interest over Saudi Arabia, HSBC, and her husband, is a prime example of the Conservatives ignoring that pledge. Because as Unlock Democracy’s Alexandra Runswick told The Canary, stories like these “undermine democracy”, as “political parties are beholden to big donors”. And no party is so beholden as the Conservatives.

HSBC, Michael Spencer, and the Conservative Party declined to comment. The Canary contacted Capital Group for comment, but none was received at the time of publication.

UPDATE: This article was updated at 12.19 on 4 May 2017 to clarify that the video was provided to The Canary by a campaign group.

– Read more about the scandal.