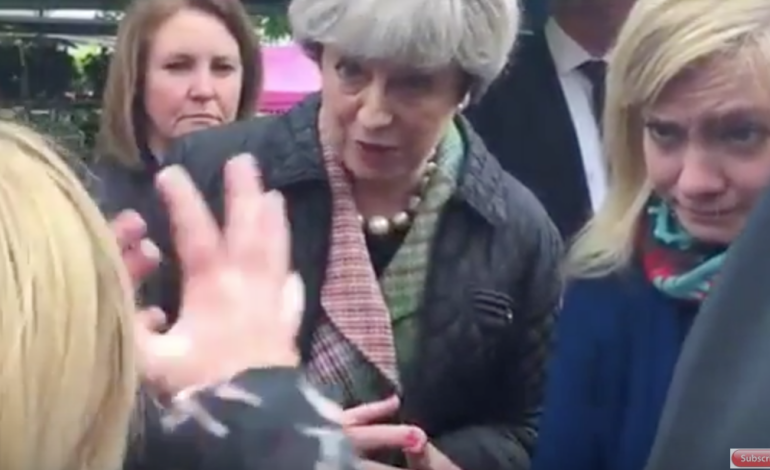 Theresa May met a real voter today who wasn’t happy with the Prime Minister’s record on disability rights. And it shows why May is so reluctant to meet real people.

May was campaigning in Abingdon when she was asked what she would do to help people with learning and mental health disabilities. But May couldn’t quite get her head around the fact she was also talking about learning disabilities, as the woman had to keep reminding her.

But the real challenge came over cuts to disability benefits. The woman stated:

I haven’t got a carer at the moment. And I’m angry. I’ve got no one to help me write a letter… I’d like someone to help me because I can’t do everything I want to do.

And when the local MP, Nicola Blackwood, tried to placate her by saying she’d tried to help her, the woman replied:

May tried to cut across her with platitudes, but failed:

You know what I want. My Disability Living Allowance to come back. Not have PIPs and get nothing. I can’t live on £100 a month. They took it all away from me.

Since the Tories first came to power in 2010, deaf, disabled and sick people (including those living with mental health issues) have been the subject of countless benefit cuts. The UN also says they have been “disproportionately” affected by successive governments imposing years of austerity. And nearly half of all poverty in the UK is directly linked to disability.

These cuts have included:

Given this record, it’s no wonder that disabled voters are angry. And this is why Disabled People Against Cuts (DPAC) are highlighting what the government has done, and calling for people to vote for anyone but the Tories.

But this video also shows why May has been hiding from ordinary people. Because many ordinary people are angry. And it’s these people who are feeling the brunt of her government’s cuts.