Theresa May is offering a new contract to UK workers, but there's a bombshell buried in the small print [IMAGES] - Canary 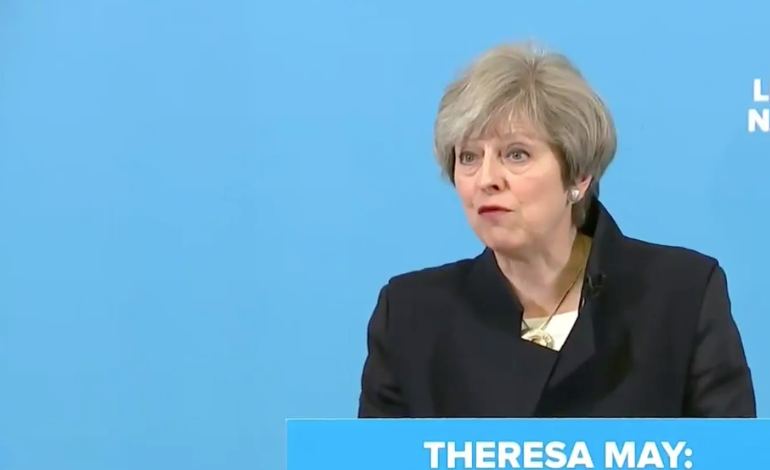 Most UK newspapers are heralding the Conservatives’ election pledges to working people as a kind of revolution. But the data crunchers outside of parliament have looked at the numbers, and they’ve found the bombshell buried in the small print. First, the plans have no funding. Second, the Conservative government’s performance on jobs and pay is far worse than we thought.

As with health proposals last week, the new jobs proposals come with zero new funding. The most high-profile of the plans is to allow working people one year off work to care for sick or dying loved ones. The catch? You don’t get paid. Anyone accepting May’s proposal would be eligible only for the Carer’s Allowance of £62.70 per week.

#Carers Allowance is £62.70. How does @theresa_may propose people live on that during their unpaid year's leave? #r4today #torymanifesto

What voters fear is that this is actually May’s plan to mop up the mess caused by her party’s underfunding of social care. Instead of delivering properly funded local services for sick and elderly people, May expects relatives to pick up the slack. And with virtually zero financial support.

The real state of play for UK workers

Behind the curtain of the May campaign, fresh data revealed the real state of play for UK workers. The Resolution Foundation, a non-partisan thinktank, has been crunching the numbers. And it’s discovered that Britain is heading into the worst decade of pay growth in over 200 years.

Britain's unprecedented post-crash pay squeeze – the 2010s is on course to be worse decade for pay growth in over 200 years pic.twitter.com/yO02zAqgXN

Not only have wages stagnated to a degree unwitnessed in the UK for two centuries, but prices are rising.

Official figures on Wednesday are set to confirm the return of the pay squeeze. Here's how pay and prices have changed since 2001 pic.twitter.com/Q4d73vJxfE

This is the result of Conservative job and austerity policies since 2010.

First, the party created the slowest economic recovery in recorded history. Second, it made that recovery entirely unequal. In fact, only two regions of the UK are currently better off than they were before the financial crisis. Unsurprisingly, they are London and the South East. A couple of areas are roughly level but every other region of the UK is poorer than it was in 2007, and some are in outright depression:

Nothing in May’s plans addresses this dismal record. Quite the opposite.

While much of the media applauded the plans, working people and their unions responded with calls for real policy. GMB is a general union that supports over 639,000 UK workers across multiple industries. General Secretary Tim Roache told The Canary:

I’m sure there will be plenty of fanfare that the Conservatives want to try and be nice to workers, but the ‘greatest extension of workers’ rights by a Tory Government’ frankly wouldn’t be that hard to achieve given recent history.

GMB members will believe it when they see it.

Roache outlines the kinds of actions that voters could expect to see from a party committed to a genuine transformation in workers’ rights:

Want to improve the lot of working Britain? End the public sector pay pinch that is seeing thousands of front line workers struggle.

Give workers equal rights from the day they start work and end the wide-scale abuse of agency contracts by companies who use insecure work as a business model.

Commit to a real living wage that people can live on without claiming benefits – all of which Labour has pledged to do. And let’s not forget, a lot of the problems working people face day in, day out were caused by Tory austerity policies in the first place.

Of course bereavement leave for parents and investment in retraining are welcome, but on their own they fall far short of what GMB members are crying out for.

We need to fundamentally rethink whether our workplace rights are fit for the 21st century.

All fur coat and no knickers

The Conservative plans look to be little more than PR. They look even less adequate when compared with the fully-funded and radical proposals from Labour. The Green Party, the SNP, Plaid Cymru, and other opposition parties are also all centring on pay and jobs as the core issues of the campaign.

Complacently confident of a landslide victory, the Conservatives appear to have written their manifesto on the back of a fag packet. That may come back to bite them hard when voters hit the polls on 8 June.