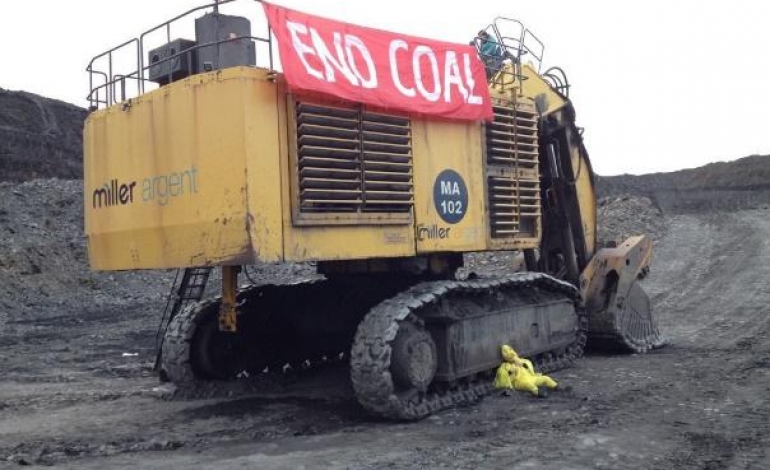 Canaries were used in coal mines to alert miners of toxic levels of gas. This is why, on 21 April, activists showed up at Ffos-y-Fran coal mine in Merthyr Tydfil, Wales, dressed as dead canaries. It was to protest against the polluting fossil fuel. But for standing up for the environment – and in turn, all of us – these protesters are being forced to fork out £10,000 in unexpected compensation costs.

These canaries – from Reclaim the Power and Earth First! – shut down this open cast coal mine, the largest in the UK. Some chained themselves to excavators, while others blocked the road used for transporting coal. One protester named Alice said:

Today we, as canaries, are warning that we need to take urgent action against coal to tackle air pollution and climate change.

Reclaim the Power also issued a statement about the protest. It highlights the harm that the coal mine is creating on a local level:

With the mine only 37 metres from the closest homes in Merthyr Tydfil, they are suffering from pollution, dust, noise and vibration every day.

500 local residents tried to take court action against the mine following concerns about high rates of asthma and cancer in the surrounding communities. The High Court refused their application as they were deemed unable to afford it. These canaries were standing up for the local residents. But once again, the justice system was not sympathetic to their cause.

On Monday 8 May, protesters were given a conditional discharge but ordered to pay £10,000 to mining company Miller Argent Ltd. This was after pleading guilty to aggravated trespass by shutting down the mine for one day. In response, Reclaim the Power said:

Corporate fossil fuel interests have become institutionalised as state interests, to be defended at all costs through collaboration between private security personnel, corporations, state forces and police who suppress, co-opt and intimidate resistance. The court’s willingness to deter protesters on behalf of Miller Argent by imposing these ridiculously high compensation payments has exemplified this today.

But the amount could have been much higher, as Alice told The Canary that Miller Argent wanted £60,000.

The protest was considered a success, as Miller Argent allegedly lost £33,000 during the first two hours of the blockade. Reclaim the Power stresses that further direct action is needed, if the interests of everyone are to be protected, and not just the profit-making interests of the few and powerful.

– Help Reclaim the Power raise £10,000 so it can continue the fight against environmental destruction.

Featured image via Reclaim the Power