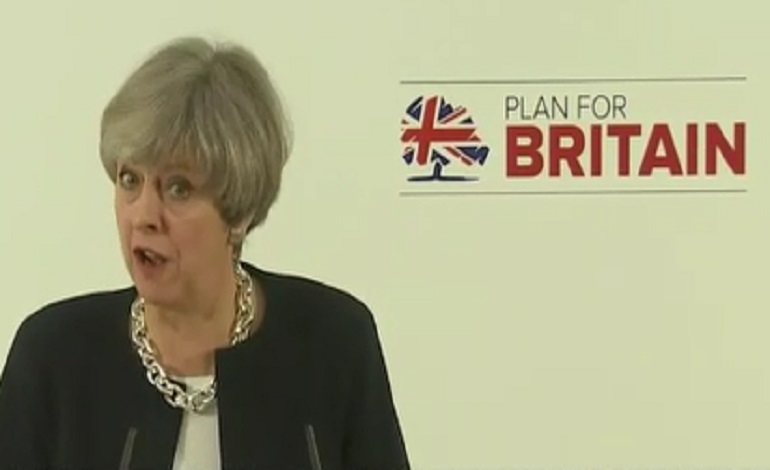 On Monday 15 May, Theresa May laid out the Conservative Party’s proposals on workers’ rights for the general election. But in a matter of hours, her pledges were lying in tatters. A senior Tory fell apart live on the BBC and admitted all the party’s plans were uncosted.

The wheels on the bus… completely fall off

Kwasi Kwarteng, who is defending the seat of Spelthorne in Surrey, was being interviewed about May’s policy proposals on BBC Daily Politics. He was discussing new employment policies, such as a pledge to allow workers a year off, unpaid, for caring duties.

Kwarteng, when host Jo Coburn probed him about where the money would come from, tried to twist the interview towards the usual Tory attack of Labour making unfunded pledges:

Much of Labour’s leaked manifesto is costed, though. Specifically, the 10,000 extra police will be paid for by reversing cuts to Capital Gains tax. Or like putting a 45p rate of tax on earnings over £80,000 to pay for an extra £7.4bn for the NHS each year. Unlike the Tories’ policies. Because Kwarteng then said, without a hint of irony, that regarding the new regulations:

Coburn continued to press him on whether it was “fully costed”. At first, he said it was and that they had done a full impact assessment. But Coburn kept pushing Kwarteng about where the money would come from. And he floundered:

May made several policy announcements about workers’ rights. Hailing them as “the greatest expansion in workers’ rights by any Conservative government in history”, they included:

But according to Kwarteng, the Tories don’t have any idea how they will pay for these, apart from having a “plan to balance the budget”. Nor do they have any idea about how many people will take up new statutory rights like carer’s and bereavement leave. So they have no idea how much any of it will cost.

This is yet more peak hypocrisy from the Tories. May has repeatedly claimed that Labour would “trash the economy and destroy jobs”; at one point saying it would “waste your money”, while releasing headline-grabbing ideas for which they don’t know the cost. And there’s nothing strong and stable about promising things to the electorate that you simply cannot deliver.