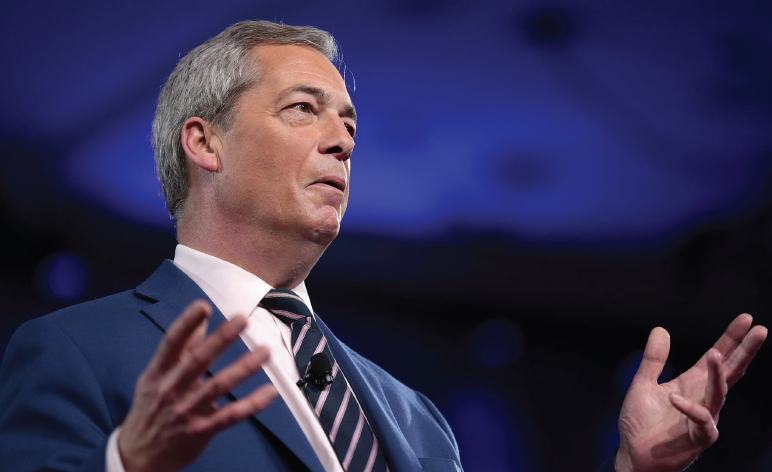 With Theresa May adopting much of UKIP’s rhetoric, Nigel Farage has become less prominent in UK politics.

Theresa May is using the exact words and phrases I've been using for 20 years. pic.twitter.com/TAbBswByWJ

And yet Farage himself has made it clear what could prompt his return. A return which would see him “don khaki, pick up a rifle, and hit the frontline”.

In the video Farage says:

[We’ll see if she’s as] successful at delivering Brexit as she was at cutting immigration as Home Secretary. And if this is not delivered, there will be widespread public anger in this country on a scale, and in a way, that we have never seen before [APPLAUSE].

And if that happens – if that happens – as much as I’m enjoying myself. I love doing the LBC talkshow… I love doing it… it’s a great fun thing to do. I enjoy my trips to the States with Trump and the White House and everything else… But if they don’t deliver this Brexit, that I spent 25 years of my life working for, then I will be forced to don khaki, pick up a rifle, and hit the frontline [CHEERS].

A spokesperson for Farage told The Canary:

It is very clear from the laughing demeanour that Mr Farage was talking about a ‘frontline return’ to politics in a metaphorical fashion.

Any attempt to take his jocular words out of context would be both unfair and in vain.

UKIP is a liberal democratic party consistently in favour of free speech and opposed to any type of violence. And of course, you already know that.

But what Farage secretly did or didn’t mean is irrelevant. What’s truly important is whether certain people to take him at face value.

To put Farage’s speech in context, it’s only 11 months since Thomas Mair assassinated the MP Jo Cox. He shouted “Britain First” when he did so. ‘Britain First’ being both a slogan and a political organisation, although the organisation denies having any links to Mair or inspiring his actions.

In January 2017 though, Britain First’s leader made a video addressing left-wing politicians and journalists in the UK. In it, he said:

I can promise you, from the very depths of my being, you will all meet your miserable ends at the hands of the Britain First movement. Every last one of you.

One in three terror suspects are now white and on the far-right. So it’s clear that far-right extremism is growing in this country. And it seems equally clear that Farage is willing to use this threat to exert political influence.

What’s less clear is if the media will give this besuited extremist free-reign to make statements that would be taken as threats if they were uttered by anybody else – ‘jocular’ or no.