Police officers jeered the Home Secretary and called her a liar. But the media totally ignored it [VIDEO] - Canary 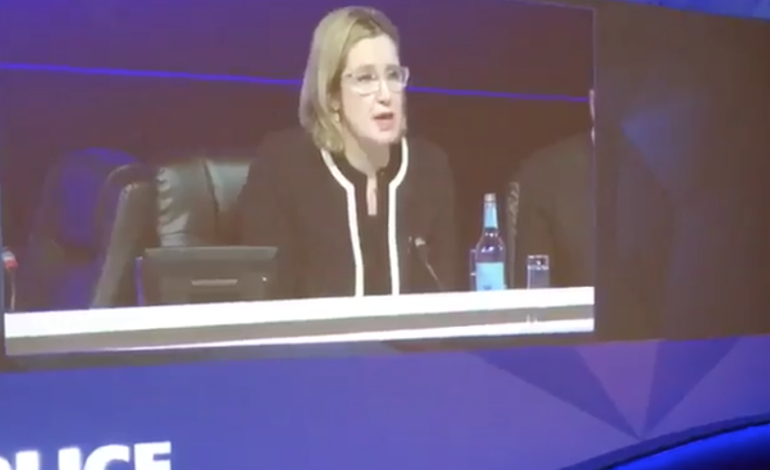 Home Secretary Amber Rudd spoke at the Police Federation conference on 17 May 2017. But her appearance did not go well, to say the least. Police officers erupted in shocked laughter after Rudd claimed their average wage was £40,000 after being asked a question about officers forced to use food banks.

But while a Channel 4 journalist shared the footage on their Twitter page, no other mainstream media outlet appeared to report the embarrassing moment for Rudd.

Officers on the breadline

During a question and answer session, Rudd was asked about officers and their families being forced to use food banks:

"We are seeing #police officers needing food vouchers," says @Hantsfedchair. "Is that right for the country?" #PolFed17 pic.twitter.com/4jTyVgID8Y

And her response was met by an incredulous response from the audience who laughed and mocked her. Rudd stated:

I understand it must be difficult for the police officers and indeed their families. The average police officer’s earnings is about £40,000 a year so I am surprised to hear that.

At which point the room started erupting. Rudd continued:

Although presumably she should know. Given that she is, after all, the Home Secretary. The reaction in the room continued, and Rudd was left fumbling:

I see I haven’t quite won you all over yet.

Watch: Home Secretary's awkward moment over police pay. "I can see I haven't quite won the room over." pic.twitter.com/niSWRLGZro

Rudd’s figures were immediately pounced on by police officers:

Amber Rudd Home Secretary claims the "Average Police Officers Pay is £40,000. Yet another MP plucking figures out of the air!! #PolFed17

In fairness to Rudd, some calculations do put the average wage of a police officer at £40,000. But that’s taking into account those who earn a lot more. The starting salary for a police constable is around £20,000 and the maximum a constable can get is £38,000 – so for a large number of rank and file officers who the federation represent, the £40,000 figure is way off.

And this is why she was jeered at by police officers who accused her of lying:

Rudd also came under fire when she said the 1% pay cap on all public sector workers would stay in place until at least 2020:

Generally, government ministers have been in hiding during this election campaign. Education Secretary Justine Greening pulled out of addressing headteachers. Theresa May was asked to speak at the Royal College of Nursing conference and refused. But the Tories made an exception for the public sector workers normally mostly in favour of the party, the police.

But it didn’t go well. And in comparison, the standing ovations Jeremy Corbyn received from nurses and headteachers is an embarrassment for the Conservatives. Public sector workers from NHS staff, teachers and now even the police are making it very clear. We need to get rid of the Tories.