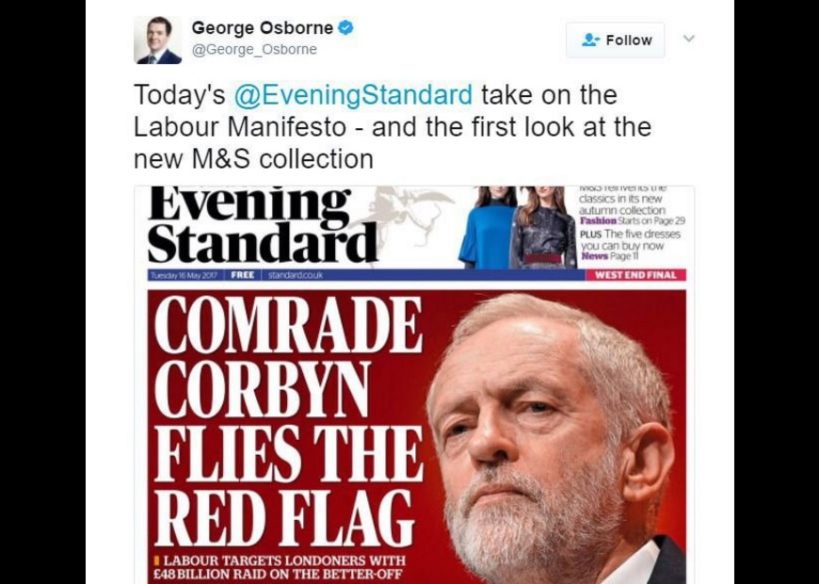 The corporate media’s negative reaction to Labour’s manifesto was no surprise. After all, why would super-wealthy press barons be happy about having their taxes raised? But former Tory chancellor George Osborne’s response stood out in particular. In large part because, in his attempts to smear Jeremy Corbyn, he revealed an embarrassing Tory secret instead.

George Osborne, who stood down as a Conservative Party MP after the announcement of the 2017 general election, is now Editor of free tabloid The London Evening Standard. He has already used this platform to push anti-Labour propaganda, as we might expect. And he did this in particular after the official release of Labour’s manifesto:

Yes, those claiming that there is an Anti-Labour bias in the media are just conspiracy theorists. Our media is totally fair and balanced! pic.twitter.com/pjUjetjNms

The subliminal message on that front page being, apparently, that Corbyn is some sort of communist revolutionary.

Many commentators online were outraged with Osborne’s attempts to smear Jeremy Corbyn and his party:

People clearly weren’t happy to be lectured by a man who, as chancellor, increased the UK national debt by over £555bn. A man whose Tory government has given nurses a real terms pay cut of 14% since 2010.

Today, Britain has one of the most concentrated media environments in the world. Just three companies control around 71% of national newspaper circulation. And The Canary has reported extensively on the resulting corporate/conservative bias. In this environment, it’s unsurprising that Theresa May’s Conservatives are treated much more favourably than Jeremy Corbyn’s Labour in the mainstream media.

Fortunately, however, George Osborne slipped up with his propaganda, telling Standard readers an embarrassing secret about the Conservatives. He said:

The Coalition government enacted a programme of austerity but claimed that key services such as the NHS and schools would be ‘ring-fenced’ — true in the strict sense that their budgets were not cut, but in practice they faced a prolonged freeze that meant they couldn’t do everything asked of them.

In other words, Osborne effectively admitted that his Conservative Party had underfunded both the NHS and schools, preventing them from working properly.

Just take that in for a second. While May’s Conservatives have tried to hijack the Brexit sentiment of ‘taking back control’ (and of using the money saved to fund services like the NHS), they have actually been the ones giving away control in recent years. They’ve been underfunding the NHS, privatising it slowly by the backdoor. And everything suggests they’ll continue to do so.

Lose more control? Or get it back?

In his editorial about Corbyn’s manifesto, Osborne writes:

He’s right to say that if the British people want their government to spend a lot more money, they are going to have to pay a lot more in taxes.

This is the most Left-wing manifesto that Britain has been presented with for a generation.

And it may well be. But it definitely isn’t revolutionary communism, as corporate media outlets are apparently trying to suggest. In fact, as Labour’s Barry Gardiner points out, even the Tories have taxed wealthy citizens much more in the past:

Media seem very keen (not!)😉to point out that Labour's top tax rate is 10%lower than the 60% rate for 9 years under Mrs Thatcher
1/2

Labour’s plan for Britain isn’t some sort of unrealistic call for revolution. Instead, it’s one of the fairest, most sensible, and most democratic manifestos in mainstream British politics for a long time. That’s why it’s got establishment representatives like Osborne so worried. Because it has a real chance of getting the Tories – and those they serve – out of power.