Theresa May is being trolled by Tory Jesus. There's quite a compassion gap between Christ and the Conservatives [IMAGES] - Canary Workers’ Co-op 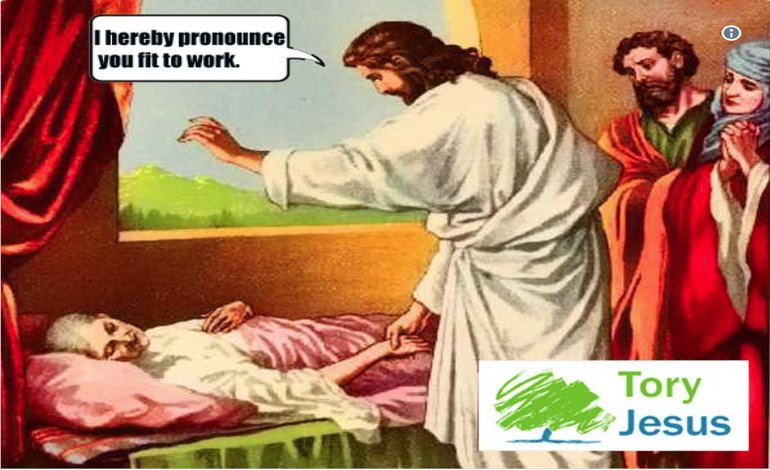 Conservative leader Theresa May has made much of the influence of her Christian values on her plans for Britain. But policies which drive people into job insecurity and food banks don’t quite seem in keeping with feeding the 5,000.

Now, May is being trolled by Tory Jesus. And he’s rewritten key moments from the Bible to match with the Conservative approach to Christian charity.

Biblical Jesus, like Whitney Houston, believed that children are the future. As seen in Matthew 19:14:

But Jesus said, Suffer little children, and forbid them not, to come unto me: for of such is the kingdom of heaven.

Neither does Theresa May, in policy terms. The only way the Conservatives found to reduce absolute child poverty was to change the definition of poverty. Using the old methodology, absolute child poverty has increased by half a million since 2010. Which means there are now four million children living in poverty in the UK – and planned cuts to in-work benefits are set to make things much worse. According to the Institute for Fiscal Studies (IFS), relative child poverty is set to rise by another 1.3 million by 2020.

In Matthew 14, Jesus retreats for some peace after his friend John the Baptist is beheaded on the orders of King Herod. But locals follow him anyway. Jesus takes the time to heal their ailments, and turns a few loaves of bread and some fish into a banquet fit for the thousands of hungry disciples. The lesson is one of service, even in the face of painful personal circumstances. And also, the power of sharing.

Here too, Theresa May comes down on the side of Tory Jesus.

Under Conservative governments, the UK has seen an astronomical rise in food bank dependency. In 2009, the Trussell Trust was issuing 40,898 three-day food packages a year. By 2016-17, this increased to 1,182,954. That is an increase of 2,792% since the Conservatives came to power. At the same time, the Conservatives launched an attack on the very welfare system that should have been supporting these people.

Biblical Jesus was known as a miracle worker. Healing the sick, and so on.

Like Tory Jesus, Theresa May’s Conservatives believe they can miraculously heal the sick in order to get them into work. This involves putting the person through a Work Capability Assessment, even if they have a terminal illness or terminal/permanent condition. The government’s own statistics show that, between January and November 2011, 10,600 [pdf,p6] sick and disabled people died within six weeks of their Atos work capability assessments.

And paradoxically, Theresa May’s party demands that, while cutting these basic lifelines to citizens, the taxpayer should subsidise the profits of private companies.

There is nothing compassionate about the Conservative Party of 2017. And Thursday’s manifesto launch confirms we can expect little compassion should they win the general election either. Empowering people to live the fullest lives possible requires investment and support from cradle to grave, to iron out the creases of inequality that act as barriers for so many. Instead, May offers only hyper-individualism. It’s every person for themselves. As if inequality is not an agitating factor in the game of life at all. UK citizens deserve, and are capable, of far greater humanity and vision than that.