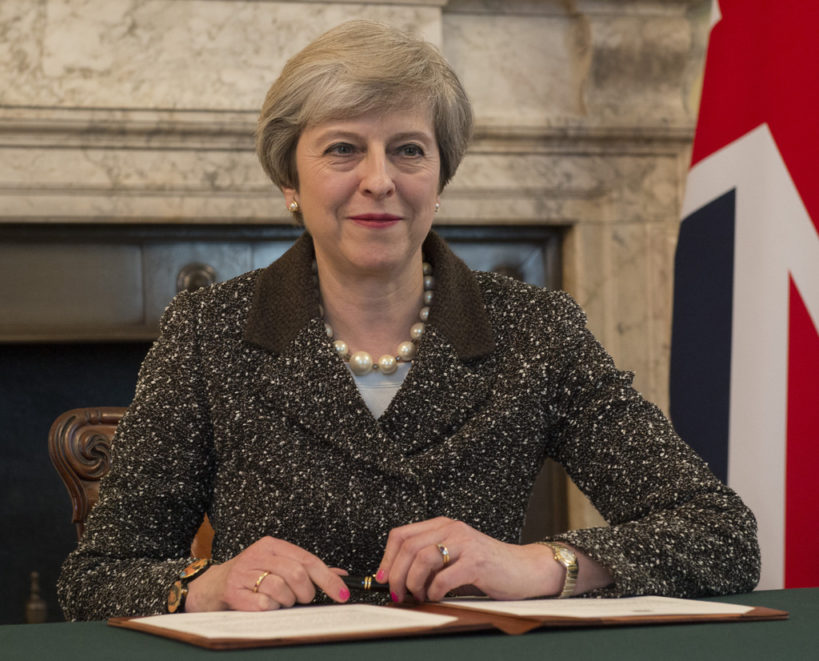 The Tories have pledged all kinds of goodies in their manifesto launch in Halifax. Theresa May promised £8bn extra for the NHS and £4bn extra for schools.

But Labour leader Jeremy Corbyn’s crack press team have spoiled their love-in with the mainstream media with a detailed dossier listing 50 broken pledges by the Conservatives.

May is desperate to keep the Conservative Party out of her campaign. Her battle bus only mentions the party she has been a member of for decades in tiny print on the door. She speaks in front of banners that herald “Theresa May’s team”.

But Labour’s beautifully timed document, released on the eve of the Tory manifesto official launch, makes it plain that May has been at the heart of successive Conservative governments for the last seven years.

She was there when the Conservatives published their 2010 manifesto [pdf] and she was plastered all over the cover of the 2015 manifesto.

From the economy to the NHS, and policing to schools, Theresa May’s government has failed again and again to deliver on the pledges they made to the British people.

The 22-page dossier, which has been shared hundreds of times online, skilfully demolishes the Conservative record with carefully sourced evidence.

It reveals Conservative governments’ reputation for economic competence is a sham. It highlights 15 broken economic promises.

The Tories promised to raise living standards in their 2015 manifesto. But working families are set to be on average over £1,400 a year worse off.

They also promised to crack down on tax evasion and aggressive tax avoidance. In fact the tax gap, the difference between the amount of tax that should be collected against what is actually collected, has more than quadrupled.

In the same manifesto, they pledged to eliminate child poverty. But they have abolished child poverty targets and the Institute for Fiscal Studies has forecast nearly a  million more children will be pushed into poverty because of the government’s policies.

The dossier also goes through broken NHS, housing and education promises by the Conservative Party.

The Tories pledged to improve standards in all areas of care in 2015. Yet their record is abysmal.

The Conservatives promised to spend more in real terms every year on the NHS. Official figures show that real terms funding per head will be cut in 2018-19.

Conservative education promises are worth as much as their health pledges.

Theresa May’s party promised to protect per pupil spending in the last election. Yet funding per pupil will see a real-terms reduction once inflation is taken into account.

The Tories declared in 2015 that if you want to go to university, you can. But they have trebled tuition fees, plan to introduce a framework that could increase them even more and replaced means-tested grants with more loans.

On housing, the Conservative record is equally embarrassing.

They pledged to build more affordable housing. But the number of genuinely affordable homes for social rent which began construction last year was fewer than 1,000, compared to 40,000 started in Labour’s last year in government

They promised to build more homes that people can afford. Yet under the Conservatives house-building fell to its lowest peacetime level since the 1920s.

As Theresa May once said in parliament: “the idea that a lot of voters read manifestos is purely fictional, although of course in the case of some parties, their manifestos are pure fiction.”