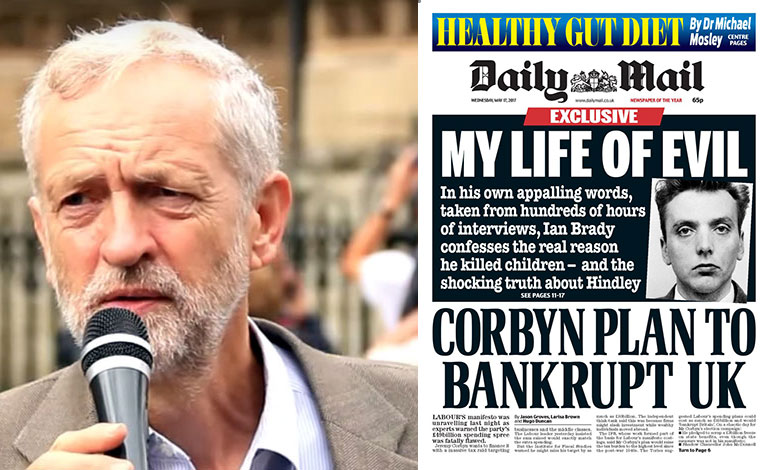 On 16 May, the media went into total meltdown over the Labour Party’s tax plans to lower the threshold for the 45p rate of income tax. Many outlets began attacking the party for its supposed “tax raid on middle classes”. But one woman shut the hysteria down in a single post. 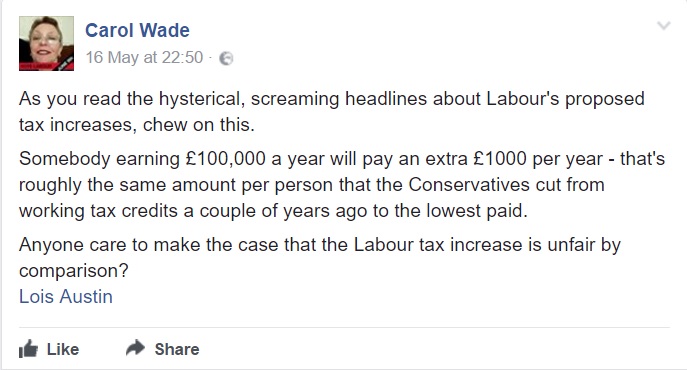 Wade highlights that the media is attacking Labour for its plans to tax those earning over £80,000. Under its plans, someone earning £80,000 to £100,000 could lose out on up to £1,000. But her point is that Conservative cuts have meant that more than three million ordinary working families will lose an average of £1,000 a year by 2020.

In 2015, the Conservatives tried to dramatically cut Tax Credits. They were forced to U-turn on that cut after a public outcry. But they are still cutting Universal Credit, which is replacing Tax Credits. And in 2015, the Resolution Foundation said those cuts mean more than three million families will lose an average of £1,000 a year by 2020. David Finch, the foundation’s Senior Economic Analyst, said at the time:

The welcome reversal of planned cuts to tax credits will bring short-term relief to millions of working families. But they could still see major losses later in the parliament.

By 2020, millions working families will lose an average of £1,000 as a result of cuts to Universal Credit, though the losses could rise to £3,000 for some families.

But it’s even worse than that

More recent analysis by the Institute for Fiscal Studies (IFS) suggests the true figures are even worse. The thinktank says benefit freezes, cuts to Child Tax Credit, and the rollout of Universal Credit all mean “large losses” for low-income households. Shadow Chancellor John McDonnell said of the findings:

The Tories pose a clear threat to working people’s living standards. Under Tory proposals cuts to in-work support will leave working families with children an average of £2,500 a year worse off.

In-work benefits like Tax Credits and Universal Credit are an essential means of re-distributing income by paying money to families raising children and to working people on low incomes. But many argue that Tax Credits are only needed because wages are so low — the fault lying with businesses unwilling to pay their employees a decent wage.

According to its manifesto on Funding Britain’s Future, Labour will be [pdf p6]:

Lowering the threshold for the 45p additional rate to £80k (Top 5%) and reintroducing the 50p rate on earnings above £123k.

Wade compares this extra money taken in tax from the top earners to the amount the Conservative Party is cutting from low-income working families and asks: which policy is more unfair?

So not only will more people be affected by the Universal Credit cuts (over three million vs 1.3 million), but these three million people would be among the most vulnerable in society. While the media lambasted Labour for ‘attacking’ the rich, it once again failed to hold the Conservatives to account. And it continues to do so now.

Update (1915 on 18 May 2017): Some readers have informed us that the message was originally posted by Lois Austin (tagged in Wade’s post). The Canary has been unable to verify that claim.