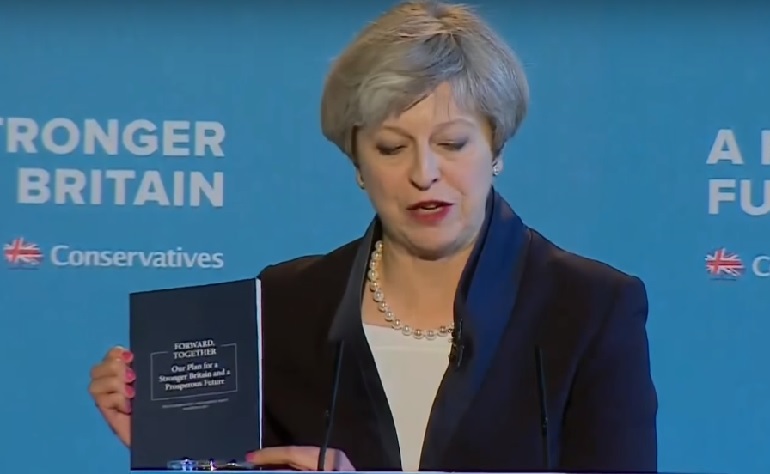 The Conservative Party launched its manifesto in Halifax on 18 May. But one local Tory candidate reportedly used the opportunity to skip a debate with his opponent at the last minute. And his constituents were not happy.

Not the best way to get re-elected

Tory candidate for Calder Valley Craig Whittaker originally defeated Labour in 2010. And he won again in 2015, albeit with a reduced majority. On 8 June, he’ll be up against Labour’s Josh Fenton-Glynn. But he seems to think his position is so safe that he doesn’t even have to try and win local people over. On 18 May, Fenton-Glynn tweeted from a local sixth form:

I've asked him to debate what he offers. Still waiting for a response. Come on Craig people need to here from you. #wherescraig pic.twitter.com/rHEgAFBHZl

Whittaker reportedly cancelled less than an hour before he was due to debate Fenton-Glynn. And a number of local Twitter users slammed him for failing to turn up:

Tory candidate Craig Whittaker was meant to be there too, but decided not to turn up. Sums him and his party up does that #WheresCraig

And by the looks of it, Whittaker may have missed out on an opportunity to impress young voters:

And this isn’t the first time Whittaker’s been accused of avoiding debates, either.

Craig Whittaker says his #CalderValley record speaks for itself. It'll have to since he doesn't mention it & refuses to debate. #WheresCraig pic.twitter.com/0HQA8TVHiQ

Whittaker’s voting record does indeed speak for itself. He has consistently voted:

In other words, Whittaker is a pretty standard Tory. And his official Twitter account has even shared bile from The Daily Mail for good measure. Now, he apparently hopes to be re-elected by simply echoing Theresa May’s mantra of ‘strong and stable leadership’.

But his Labour opponent has come out fighting. Fenton-Glynn says:

With my work with a Christian anti-poverty charity and as a local councillor, I’ve seen the effects of the needless and vicious austerity measures imposed by the Conservative government. When our nurses are having to visit food banks to survive, things have clearly spiralled out of control… As a Labour councillor I have done everything I can to ensure we have sufficient flood protection and environmental measures in place for the future, while Craig Whittaker shockingly voted against increased flood defences just weeks after the floods hit our community… Whittaker voted to scrap the Building Schools for the Future scheme that would have seen our crumbling schools rebuilt, but as your MP I will fight to secure the funding our schools and our community needs… I will champion the smaller businesses in our community that have been ignored by this government, who are failing them.

The Canary invited Whittaker to comment, but had received no response by the time of publication.

The battle for Yorkshire

While there are a number of key battlegrounds in the 8 June election, both Labour and the Conservatives have key targets in Yorkshire. And one of Labour’s is apparently Calder Valley. The marginal seat of Halifax, meanwhile, is one of the Tories’ “must-gains” in 2017, according to Conservative Home.

As Prof Martin Smith from the University of York says:

Both parties see [Yorkshire] as central battleground… For Labour the large northern cities are now its core constituencies and if it is to avoid complete disaster it needs to retain those seats… It is a crucial part of the campaign for both parties as they want to show that they are not just parties of the south but of what they see as ordinary working people.

In 2015, routine visits and pledges for Yorkshire from David Cameron and George Osborne may have helped to hold Labour back. But now, as The Yorkshire Post points out, their “promises to Yorkshire have gone and have been succeeded by a Prime Minister and Chancellor who seem less enthusiastic about the Northern Powerhouse concept and the drive to give regions like ours more powers over their own affairs”.

In other words, Tory successes in Yorkshire are far from inevitable. The massive crowds that Jeremy Corbyn has attracted in the county recently, meanwhile, suggest that Labour has real momentum. And with candidates like Craig Whittaker apparently avoiding policy debates with local people, the Tories could be in big trouble.