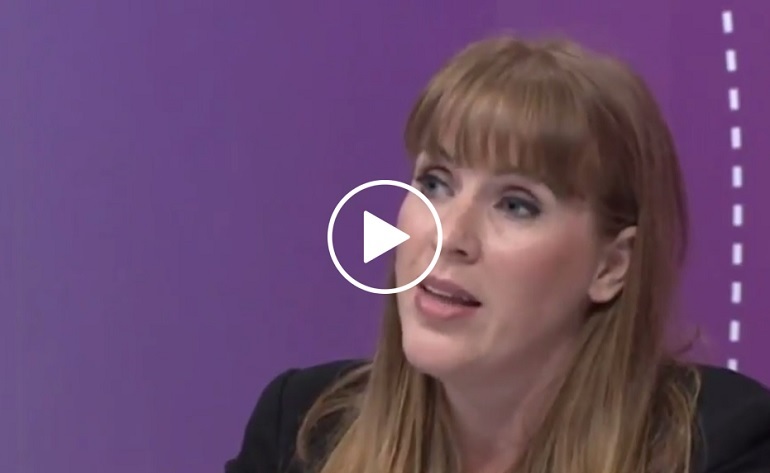 First, an audience member asked Rayner about how Labour would plan to reduce Britain’s debt if it’s so against spending cuts. And she answered:

That’s a really fair point because, under the Conservatives, debt has doubled… [applause]

They promised that they would make sure the deficit was already gone by now. It’s not true.

She then went on to point out that, if borrowing is going to happen, the money is best spent on investing in Britain’s future:

It’s about making sure that our young people have a National Education Service, so they’re invested in without the debt.

Another audience member then asked if tuition fees should be free for all students. Rayner answered:

Yes. I think they should be… [applause]

One member of the audience, however, took issue with Labour’s policy of adding VAT to private school fees. He argued that it would force people out of private schools and into state schools. But Rayner had a very simple answer for him:

The VAT levy on schools is about schools paying the right amount of VAT, which they currently don’t have to pay. It’s a state subsidy to private schools… When you’ve got choices to make, I believe that actually putting that money into the 95% rather than the 5% is the right option.

It’s about choices. And what we’re saying is this government have made choices where they’ve slashed corporation tax, slashed the tax for those that are rich. And then they’re making pensioners pay for it. Now I went to a state school, and all my children go to a state school. I want the best for every single child. And that’s why I don’t believe that grammars are the right thing to do… [applause]

Bringing back grammar schools is essentially one of Theresa May’s flagship policies. But because it’s so unpopular, she has avoided mentioning them by name in her manifesto.

Apparently, there are other members of tonight's #bbcqt panel… you wouldn't know it, @AngelaRayner is owning it. pic.twitter.com/gKTvBw14Sm

@AngelaRayner bringing it once more. We would be lucky to have her in charge of our schools. #bbcqt. pic.twitter.com/ZbDwQO6HVy

Another panelist on Question Time was Secretary of State for International Development Priti Patel. And to cap off her performance on domestic policy issues, Rayner took the opportunity to slam the Conservatives’ foreign policy spending priorities too. She said:

We’re spending money on giving aid to Yemen. Yet we’re selling arms to Saudi Arabia, who are causing the crisis in Yemen. So we need to look at that.

In short, Angela Rayner’s no-nonsense answers dominated Question Time on 18 May. And they called into question the Tories’ economic trustworthiness, their commitment to building a better future post-Brexit, their ability to make choices that benefit the greatest number of citizens, and their ability to use common sense on foreign policy. All in the space of one TV show.

That’s the kind of skill and passion that’s been missing in British politics for way too long. And it could be a game changer.