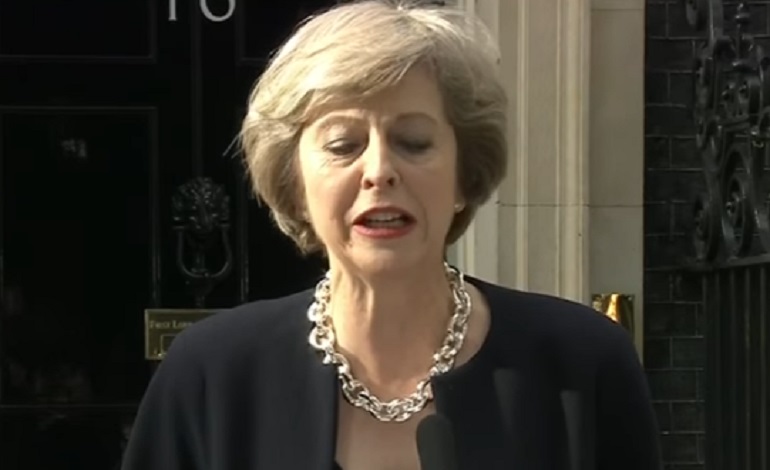 Theresa May was in Yorkshire on Thursday 17 May, to unveil the Conservative manifesto for the 8 June general election. It promises an increased tax burden for low and middle earners, assaults on social care and education, and holds a sting in the tail for elderly voters. At 88 pages, it may turn out to be the longest suicide note in political history.

First, the tax bombshell. While Labour is pledging zero tax increases on anyone earning under £80k a year, the Conservatives are shifting the tax burden the other way. The manifesto [pdf] claims that:

The Conservatives will always be the party that keeps tax as low as possible and spends the proceeds responsibly.

May plans to raise the higher rate income tax threshold from £45,000 to £50,000, meaning those earning more will pay less tax.

And it still plans to drop corporation tax to 17% by 2020. In line with May’s Brexit plan to turn the UK into a tax haven for wealthy individuals and corporations, at the price of investment in public services, and shifting the tax burden down the economic food chain.

Next, the assault on education.

The provision of free school meals has long provided critical support to children from impoverished homes. Because hungry children struggle to learn.

Labour’s manifesto pledges universal free school meals for all children, to remove the stigma of those who currently require means testing. It will be funded by a small tax on private education fees. In contrast, Theresa May is coming after free school dinners. Pledging instead, a free school breakfast. Conservatives say the policy will be an improvement and increase provision to children, while simultaneously arguing it will save £650m a year. So let’s be clear, this is a cut. In additional to wider budget cuts of 3% on thousands of schools.

The Institute for Fiscal Studies (IFS) agrees with the assessment of teachers and parents, confirming that these are the ‘deepest cuts’ to education in 30 years. Ironically, since Margaret Thatcher was Prime Minister.

The decision facing voters on 8 June is stark. A fully-funded National Education Service under Labour, or the misery manifesto from the Conservatives.

Since 2010, the Conservatives have claimed that austerity measures were aimed at ending the budget deficit. This has been a central campaign promise at the 2010 and 2015 general election. They failed both times. Now, Theresa May is making the same promise again.

The real impact of Conservative economic policies is clear and incontestable. First, it created the slowest economic recovery in recorded history. Second, it made that recovery entirely unequal. In fact, only two regions of the UK are currently as well off, or better off, than they were before the financial crisis. Unsurprisingly, they are London and the south-east. Every other region of the UK is poorer than it was in 2007, and some are in outright depression:

While Labour is offering a £10 minimum wage, and renationalising high inflation utilities like water, energy and rail to start resetting the economy – May is continuing course at full steam. Her manifesto reverses all promises related to wealth inequality. The pledges of a £9 minimum wage, a rail fare price freeze, and a tax freeze on wages have all been scrapped.

An assault on social care

Perhaps the most offensive elements of the Misery Manifesto are its efforts to break universal social care for elderly people. Under May, anyone with an estate of over £100,000 will be charged for their social care bill after they die. With current house prices, this would hit most people in Britain who own their own homes – and end any of the social mobility chances offered by property ownership. Because the planned nest egg would go straight to the Treasury. From the party that opposed the Mansion Tax because they felt owning a mansion didn’t mean vast personal wealth, this is high hypocrisy.

The move has been coined the “dementia tax“, because it is likely to impact dementia patients and their families the hardest. Due to the privatisation of social care under Conservative and New Labour governments, the annual cost of a nursing home place is now £39,300. The average annual wage in the UK is just £27,600.

The entire manifesto reads like a dystopian novel. A boost for animal cruelty with plans to bring back fox-hunting. May promises to back the environmentally unsustainable fracking of shale gas. Press freedom and integrity take a kicking with the scrapping of the long-promised second part of the Leveson Inquiry. Further insecurity for elderly voters as the triple lock protection on their pensions is scrapped. The end of universal winter fuel payments, meaning arduous form-filling for people in their twilight years. And the return of academic selection at just 11 years old, with the return of grammar schools. And initial responses suggest voters won’t be putting up with it.

Dementia could happen to anybody or anybody's parents. How can anyone really vote for the Tories knowing what they would do? #DementiaTax

You'll have seen & heard the most right-wing press in Europe promoting the #ToryManifesto – Here's the bits they forgot to mention. #BBCQT pic.twitter.com/KX2pFxVRLH

May’s plans do indeed constitute a Misery Manifesto. Because, frankly, it offers little else to anyone not yet rich enough to buy their own island.