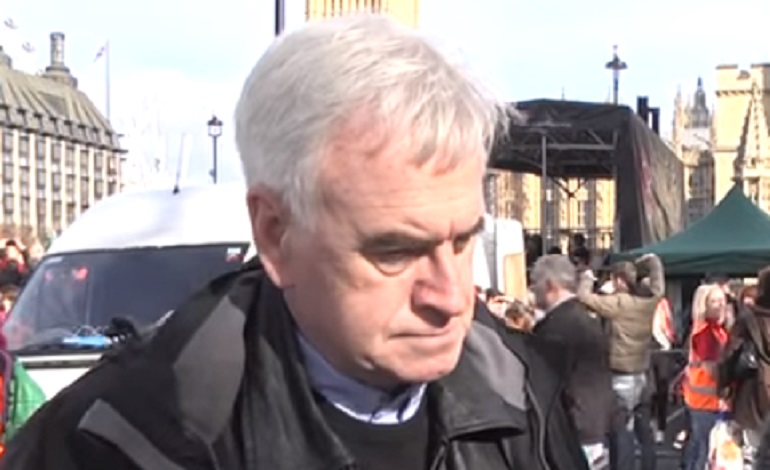 On Friday 19 May, Shadow Chancellor John McDonnell was interviewed about the Tory manifesto on BBC Radio 4 Today. But presenter John Humphrys did a better job of defending the Tories’ policies than the Prime Minister probably would have done herself. And in doing so, he made one of the most ridiculous statements of the election so far.

BBC Political Editor Laura Kuenssberg had been laying out the argument that the Tories’ manifesto included some “great challenges”, but also a “pick and mix” of policies from both the left and right. So, Humphrys began by asking [0.09] McDonnell:

Mrs May is being pretty honest. She’s saying ‘It’s going to be a tough road, but I’m going to do the right things for the people that need our help the most’… In other words, almost a Labour message?

The Shadow Chancellor argued that, while Labour’s manifesto was fully costed the Tories had presented [1.15] “60 uncosted commitments… and the only assurance on taxation… is that they’ll cut corporation tax to big business”. But this statement seemed to rattle Humphrys, as he felt the need to defend May’s manifesto. The presenter retorted that:

McDonnell said [2.02] that this would leave people “insecure”. And that May had basically presented a:

…blank cheque… you would not let someone go off to the supermarket with a blank cheque, take things off the shelves and not tell you how much they’re going to pay for them.

Must. Defend. The. Tories

But Humphrys continued to defend the Tories, using their policy on the Winter Fuel Allowance as an example. And McDonnell was having none of it:

He then went on to call the Tories’ policies on pensioners “sick and sneaky”:

Humphrys then moved onto the Tories’ social care policy, which will see elderly people having to hand over their inheritance on death to pay for any care they have in life. He said [5.10] that “surely [Labour] would have to approve of that, do you not?”.

And McDonnell clearly did not; once again, to Humphrys’ dismay. So much so that the presenter levelled possibly the most ridiculous accusation of this election at Labour. That the party was, essentially, “protecting” the rich:

Humphrys then moved on to immigration. And he once again twisted the interview, this time saying [7.55] that “at least we know what [the Tories] want to do”. Even though Labour’s stance is clearly laid out in its manifesto [pdf p.28]. But after Humphrys said [8.20] the party’s policy was “meaningless”, McDonnell had clearly had enough:

The presenter finished with an attempt at a question [9.17] about the Unite the Union leader:

Len McCluskey, your great supporter, said 200 seats for Labour would be a significant success. How many do you think…

The Canary has repeatedly documented incidents of BBC bias. But when a presenter argues that, in essence, Labour is the party who will defend the rich while the Tories stick up for the poorest, the public service broadcaster is now plumbing new depths of propaganda.

Indeed, on 3 May McDonnell accused the Today programme of just taking “a Conservative press release” and repeating “it all morning”. But he must surely have thought, after this latest foray into bias, that May had disguised herself as Humphrys and snuck into the BBC studio. Because the PM could not have found a better cheerleader for her party’s manifesto than the Today presenter.