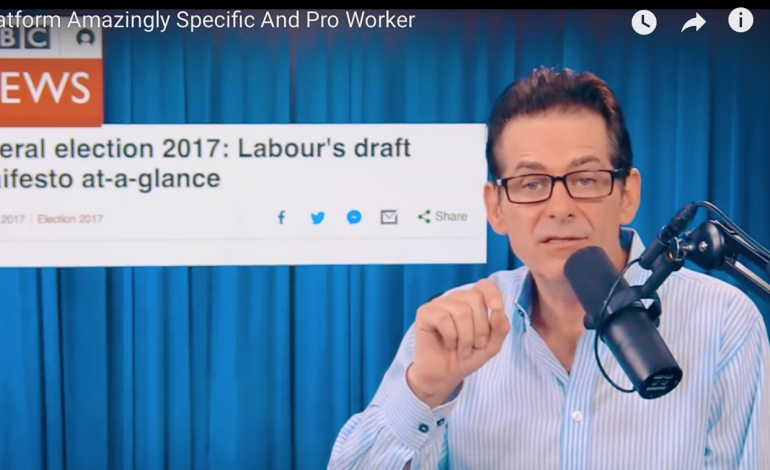 Veteran comedian Jimmy Dore highlighted the many reasons why people in the USA are excited about Labour’s Manifesto.  He was joined by comedians Stef Zamorano and Ron Placone to discuss the manifesto. Dore eagerly stated:

They have actual specific policies to actually help people who need help, not the upper 1%. They actually have policies to help the people, not the plutocrats.

The Young Turks host highlighted Labour’s plan to renationalise the railways and spoke about the decline in American travel, post The Airline Deregulation Act is 1978. Dore questioned the virtues of the free market:

Competition made everything worse in America. You get worse airline service, the seats are smaller…you’re more cramped, you’re treated like cattle.

Further into the analysis of the manifesto, Zamorano commented:

I don’t get it Jimmy, what’s their game? What’s their end plan there… doing legislation for the people?”

This is a particularly noteworthy if we look at a study undertaken by Harvard University that shows that the US is increasingly dominated by the rich and powerful elite.

And then there’s Labour’s stance on education. Its policies include abolishing tuition fees, reducing class sizes and investing a total of £25bn into education. Dore said:

Education is not a cost, and that’s the thing that neoliberals want you to think… how are we going to afford education?

This policy is appealing in a country where over 44 million people are saddled with $1.3 trillion in student loan debt. The average student in the Class of 2016 has $37,172 in debt. Student Debt is increasing. And Americans can see their British counterparts being handed a huge boost from a potential PM.

Ron Placone also made an interesting point regarding the way the manifesto uses language:

In reference to Labour’s stance on supersize class sizes, Zamorano who also teaches English in a Californian high school commented:

The demands that they’re [the government] putting on teachers every single year increase, so when I see something like this, wow, that would be a dream.

Except this isn’t a dream, it’s included in the manifesto of a mainstream political party.

Although the Americans have a predominantly insurance based system, more and more Americans are looking towards a system similar to our own. And with Trumpcare (ACHA) looming, 54 million Americans could be uninsured by 2026 if the bill passes.

But while Americans face this stark reality, Labour is pledging £37 billion in additional NHS spending.

On a broader note, Dore seems genuinely gobsmacked by the measures Labour will take to address longstanding issues surrounding pensioners:

Their government is making sure that their basic needs are met.

Dore also bemoans the lack of affordable housing in America. The average property price in Los Angles is $622,900, pricing many out of the housing market.

And this is why Labour’s plans to build a million new homes in five years, with at least half a million council homes might be popular with the average American.

And he also points out that Barack Obama bailed out private equity landlords as the middle class in America struggled. Once again, Labour’s manifesto seems to be addressing another issue Americans see being continually ignored.

Dore points to increasing derivative trading and credit default swaps that US lenders have been drawn to rather than investing in businesses. Dore also highlights that after the 2008 financial crisis the top one percent [pdf]captured 95 percent of the income gains in the first three years of the recovery.

Then there is the very different approach the Labour Party has towards unions. Dore highlighted the controversial Right To Work law, which increasingly marginalises unions in the USA. He pointed towards the situation in Wisconsin where Governor Scott Walker’s Act 10 law denied most of Wisconsin’s public-sector unions of their right to bargain collectively.

This manifesto has people excited across the pond but will the excitement continue in the UK? Corbyn has attracted thousands to his rallies so far and an exciting and progressive manifesto like this may just see those crowds transformed into winning votes.