Theresa May performs a massive U-turn on dementia tax. But does nothing to reassure millions of worried voters - The Canary 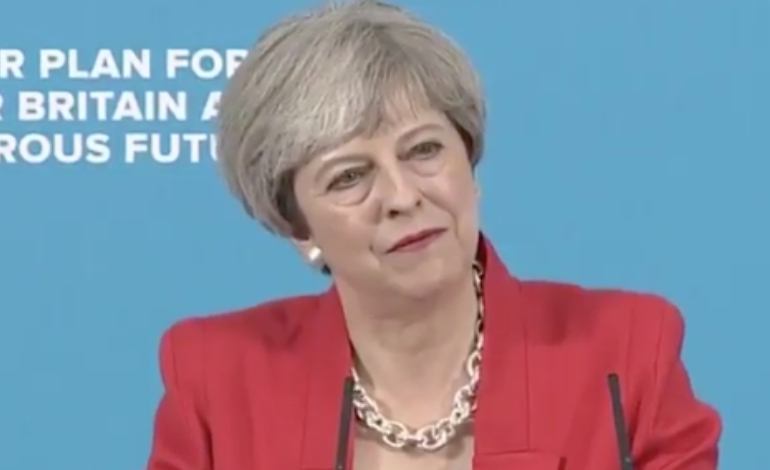 Theresa May has performed a massive U-turn on her plans for a dementia tax. But it’s also a double whammy for the Prime Minister. Because on the one hand, she looks – in the words of Channel 4 News journalist Michael Crick – like she’s “weak and wobbly”. And on the other, she has done nothing to reassure the millions of people who will potentially be affected. Because she’s only promised to consult, and she hasn’t given any figures.

May announced her U-turn in Wales, claiming that Corbyn and the Labour Party were spreading “fake claims, fear, and scare-mongering”. She stated:

So I want to make a further point clear. This manifesto says that we will come forward with a consultation paper, a government green paper. And that consultation will include an absolute limit on the amount people have to pay for their care costs.

But this crucial detail was entirely omitted [pdf] from the Conservatives’ manifesto. And this is massive back-pedalling by May on what is an immensely unpopular policy.

Equally, there is nothing reassuring about the U-turn. May consistently refused to give any figures on what the cap would be. And she kept repeating her same mantra that she was guaranteeing that relatives would inherit £100,000. But this is little comfort to families who’ll lose their homes given the average property price in the UK is £215,847.

And there’s no guarantee that even if there is a consultation, there will actually be a cap.

No one’s buying it

May then faced a barrage of questions from a normally pliable media. The BBC‘s Laura Kuenssberg began by accusing her of not being “strong and stable”. Sky News slated it as a “manifesto of chaos”. ITV accused her of a “cynical attempt to stop people leaving you in droves”. And Michael Crick from Channel 4 News asked her if it made her “weak and wobbly”. Many also pointed out that, given the speed of this U-turn, what message is she sending out to European Brexit negotiators?

"We have not changed the principles" of the social care policy set out in our manifesto – @Theresa_May https://t.co/2DiNCt73qK #GE2017 pic.twitter.com/ohd3nGqa54

May reacted angrily to these questions, shaking her head at times and stating forcefully:

We have not changed the principles of the policy we set out in our manifesto.

But her claims didn’t go down well, as can be heard from the incredulous reaction in the room.

May has tried to present the bad press she’s received over the dementia tax as fake news and “scaremongering”. Nothing could be further from the truth. These are the facts:

And while some people might mistakenly be reassured by the media portraying this as a U-turn, it offers no reassurance whatsoever to the people affected. Whatever happens with the proposed consultation, the value of a person’s property will still be taken into account in circumstances where it currently isn’t. And it will mean people losing family homes to pay for care.

It’s also a massive double whammy for May. She’s done a U-turn, so she looks like a weak leader who buckles under pressure. But at the same time, she’s not actually announced anything that will reassure voters.

May has gone through this election repeating her “strong and stable” mantra until she’s blue in the face. But every day, she is showing just how weak and unstable she really is.