As Jeremy Corbyn narrows the lead in the polls, Theresa May resorts to desperate and dodgy measures - Canary

As Jeremy Corbyn carries on narrowing the gap in the polls, the Conservative Party is seemingly resorting to increasingly desperate measures to target voters. It is accused of using “dark ads” to drown out advertisements that promoted 18-25-year-olds registering to vote. But these “dark ads” are causing further controversy because they are based on scaremongering and dodgy figures.

Charlotte Gerada told The Observer that she and a friend decided to buy Facebook ads to encourage young people to vote in key marginal seats, raising £13,000 to do so. But they found the price of the ads doubled in the days leading up to registration. Gerada explained:

We used Facebook’s ‘lookalike’ audience tool to find young people, and initially our adverts in Delyn were both our cheapest and our best-performing. But the day before the voter registration deadline, the price of the ads shot up. We had been paying around £1.08 a click before and it spiked to more than double that. At one point it was up to £3.40 a click. The way that Facebook ads work is that you ‘bid’ for the slots… so if the price shoots up, it means someone else is bidding against you for the same slot.

As The Canary previously reported, Theresa May’s party seemingly didn’t want people to vote. Whereas 36% of Labour posts were aimed at getting people registered, the Conservative Party did not use its social media budget to encourage voter registration.

But this suggests they went even further. Not only did the party not promote registering, it actively spent money buying ads that drowned out posts reminding voters to do so.

The Conservatives are refusing to supply any examples of the ads they are running. But following advice, Gerada set up a dummy account which captured one of the adverts: 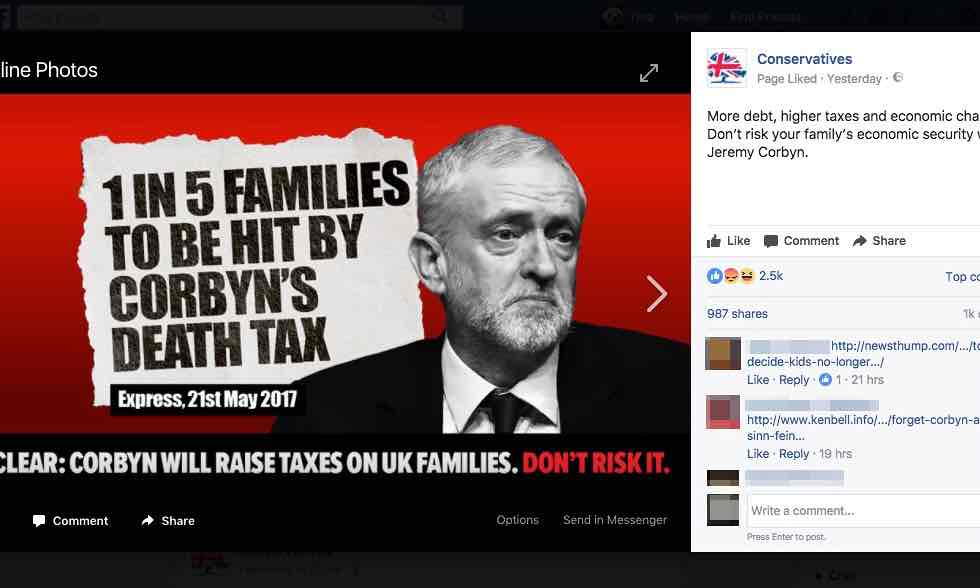 It was the last day it was possible to register to vote this week and it wasn’t just us trying to reach people – there were a lot of charities and organisations trying to do this. What really shocked me is the nature of the adverts.

And there are various problems with the ad. Firstly, it echoes an article by The Express, which is not known for its incisive reporting. But, furthermore, the figures cited are based on scaremongering by Chancellor Philip Hammond. He is quoted in the article as saying:

By reducing the inheritance tax allowance to £425,000 about 3.9 million homes owned by people who have worked hard all their lives, who have saved and struggled to put something by, will be punished by this tax.

But the problem for Hammond, The Express and this advert is that the figures don’t add up when compared to both the Labour manifesto and current inheritance tax laws. In fact, Hammond’s own figures don’t even quite make sense when it comes to his own government’s policy. So it is incredibly unclear where his figures come from.

Firstly, Labour state they are going to reverse [pdf] the changes that the Conservative Party introduced to inheritance tax. But those changes only started to take effect from April 2017 and continue on to 2021. And the tax threshold, even under the new laws is still £325,000 with a tax rate of 40% above this.

The changes are complicated. But they essentially benefit couples and property owners. Basically from 2017, if a person’s estate includes a property, then the tax band increases by £100,000 (therefore £425,000 in total). There are plans to increase this incrementally to an extra £175,000 by 2021.

Couples can also inherit part of a spouse’s allowance if it is not used up.

But this means that Hammond’s claim that Labour is “reducing” the threshold is misleading to say the least. Labour are planning to reverse decisions that have only just come into effect. And the details of that reversal are not properly spelt out yet. But these comments in The Express appear to be based on current Tory policy. So in essence, Hammond is criticising how his own government’s policy is working.

Meanwhile, the Tories’ own ‘dementia tax’ is considered a ‘death tax’. Current proposals mean that anyone with an estate worth over £100,000 will have to pay for the cost of their care after they die. And this tax really will punish those who’ve “saved and struggled to put something by” for their loved ones.

Theresa May has had to perform a partial U-turn by capping the tax. But she is not scrapping it. Nor is she definitely capping it. The only thing she is now promising to do is consult on the tax.

May’s election campaign is not going well. Predictions of a landslide victory are increasingly slipping away. Latest polls show Labour maintaining a single digit gap. And Corbyn is increasing his polling in terms of popularity and policies, while May is slipping.

Now, the party is not only spreading misleading information about Corbyn, but its actions are preventing adverts that encourage people to take part in our democratic system. And those adverts are being replaced with ones the Conservative party isn’t openly publishing.

That speaks volumes about the Conservatives.