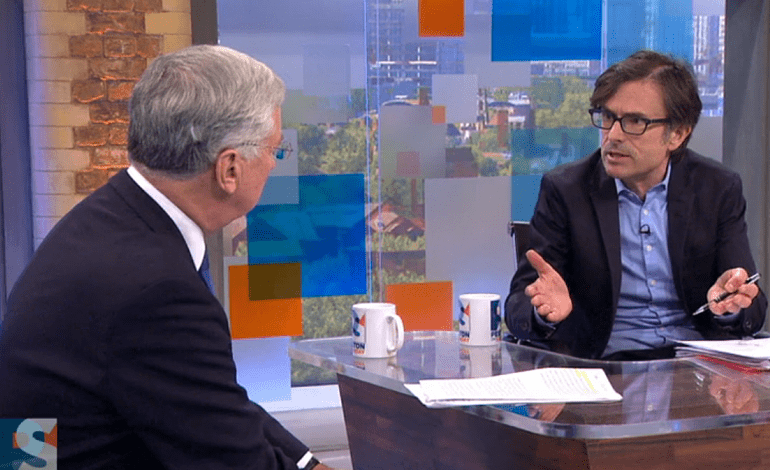 Defence Secretary Michael Fallon was humiliated on national TV again after his refusal to admit the truth even managed to exasperate ITV host Robert Peston. It shows the wheels on the Conservative’s Party’s election campaign are fast falling off.

It hasn’t been a good few days for Fallon. On Friday 26 May he was left red-faced on Channel 4 News, after attacking a quote he thought belonged to Labour leader Jeremy Corbyn. The quote was, in fact, from his colleague Foreign Secretary Boris Johnson.

Appearing again on ITV’s Peston on Sunday, Fallon attempted to recover from this blunder but instead only managed to exasperate the presenter.

That’s disreputable alarmism. There’s no evidence for that whatsoever.

Fallon claimed that one only had to look at Corbyn’s actions opposing counter-terrorism legislation and not supporting military action in Iraq and Syria. He said: “Corbyn is soft on terrorism”.

You are basing a campaign on making allegations that are simply not supported by the facts. The Prime Minister on Friday said Jeremy Corbyn has said that terrorist attacks on Britain are our own fault. He said no such thing.

Fallon insisted that Corbyn did say that because he linked terrorism to foreign policy. But Peston argued that wasn’t the same thing. And furthermore, he explained that Johnson had made exactly the same point a few years ago.

BoJo said it too

Fallon maybe should have learned his lesson from Friday and got his counter argument a little tighter. But he selectivity quoted from Johnson’s comments, prompting Peston to remind him what the Foreign Secretary truly said:

He said those who argued that the attack on Iraq and the way that we got rid of Saddam without rebuilding Iraq, those people who said that would increase the risk of terrorism, they had a point. Those were his exact words… Do you want me to show you the article. Michael, don’t argue with me about it, I’ve got it.

Fallon then claimed Johnson was only arguing foreign policy gave terrorists a “fabricated pretext”. While he claimed that Corbyn said it gave them a justification. But, as Peston pointed out, Fallon himself was fabricating what Johnson had said in order to make his argument.

The episode does, however, highlight something important.

The Tories, with little positive messaging in their party manifesto, are seeking to run a negative campaign against Corbyn’s Labour. Claiming he is soft on terrorism is one such part of that. But Corbyn’s pledges to increase the capacity of intelligence staff and police to deal with future terror threats, don’t suggest he will be lax on terrorism.

Fallon’s conduct in this interview though does suggest that the wheels of the Tory campaign strategy are starting to fall off.