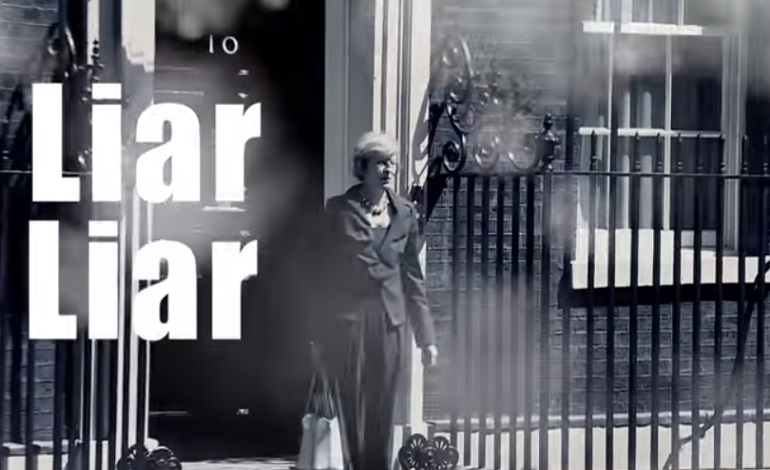 The group behind one of the songs currently in a Top 40 chart has told The Canary that it came about because the band were “horrified” by the Tories. And it has no shame in calling Theresa May a “liar”. In fact, the band said that it “would be rude not to”.

Captain SKA has moved into the iTunes Top 40 downloads with its track Liar, Liar GE2017. As The Canary previously reported, the song is a new version of the 2010 anti-austerity track Liar, Liar. And with the support of the People’s Assembly, Captian SKA are hoping to make the official Top 40, which would mean the BBC would be forced to play the track:

All download proceeds from before the 8 June election will go to food banks across the UK, and to the People’s Assembly, which is currently in the midst of a billboard campaign. The group’s posters read “I am a threat”, accompanied by May’s face. The poster goes on to say that May and a Conservative government are a threat to “your local hospital, your child’s education, your standard of living, your job security, your pension [and] your peace and security”. It urges passers-by: “Don’t vote Conservative on June 8th”.

Jake from Captain SKA told The Canary that he started the band in 2010 because he was “horrified about the austerity measures being brought in by the coalition government, and equally appalled at the lack of musical response”. But the group’s influences run a lot deeper:

I’m a freelance musician, and have been lucky to work with many wonderful acts over the years as a session player. Lots of pop acts, as well as world music artists, jazz, salsa, reggae, Klezmer and dancehall. So many people I’ve worked with have influenced the sound. The band are all freelancers and I like to think everyone’s specialism comes into play in the writing. One of our singers, Rubi, is a dancehall specialist and brings a heavy dose of that. The rhythm section are Brazilian. And our guitarist plays awesome Jazz, and also is amazing at mixing and mastering. So it all adds up. From a reggae point of view I also toured for many years with the wonderful Maroon Town and learned my skanking chops with them.

There is a need for politically-driven music in the UK now. Because over the last seven years of Conservative rule:

It is facts like these that drove Jake and Captain SKA to re-release Liar Liar. But Jake also said:

I got so many messages to re-release once the election was called, it seemed rude not to.

Music as a force for good?

There has been a noticeable re-invigoration of politically-driven music of late, especially in the Grime scene. The #Grime4Corbyn campaign has taken off, with artists like Akala, Lowkey, JME, Novelist and Stormzy coming out in support of Jeremy Corbyn. And socially-conscious artists like Potent Whisper and NxtGen are making waves with their own brand of politically-driven Grime. But Jake was pointed in his response to the music industry as a whole:

While it’s amazing the Grime scene has been getting involved, the wider UK music industry needs to hang it’s head in shame over it’s apathetic response to what is the most right-wing government for decades. I’m so sick of seeing a top 40 filled with homogenised crap.

It is telling of the current mood in the UK that Captain SKA’s track is performing so well. And with the opinion polls showing a noticeable shift in Labour’s favour, the public seem to becoming increasingly aware of just what’s at stake in this election. Jake is personally throwing his weight behind Labour:

The best outcome for me would be that Corbyn wins. It’s totally doable. There’s a lot of angry young people out there. And if they mobilise and vote in mass I can see a big upset.

And with more and more people hearing that May is a “Liar”, a Labour victory may not be such a longshot.

– You can download Liar Liar Ge2017 from iTunes, Amazon, Bandcamp, or Spotify.

– Support the track on Twitter using the #liarliar hashtag.