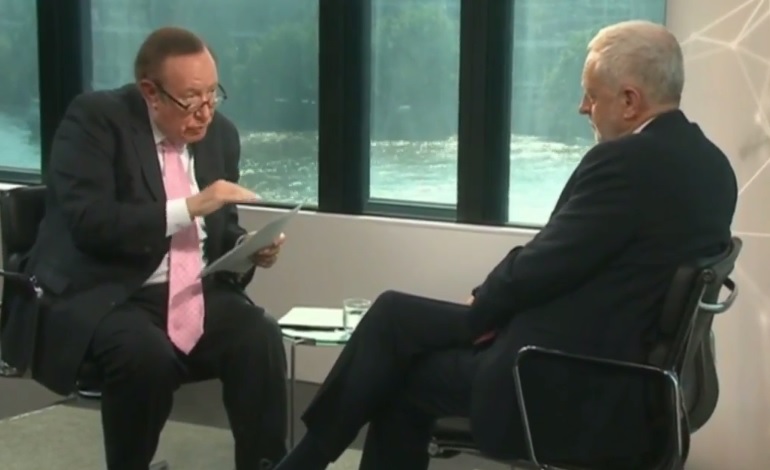 The BBC‘s Andrew Neil interviewed Jeremy Corbyn on 26 May. In the interview Neil challenged Corbyn on his spending plans. But Neil dropped an absolute clanger about the Tories while doing so. Because he exposed the Conservative Party’s real record on economic matters and blew a gaping hole through its main argument for re-election.

Labour’s manifesto includes proposals to set up a national investment bank, renationalise railways, bring water into regional public ownership and create a public stake in the energy sector. So, in Corbyn’s episode of The Andrew Neil Interviews, the BBC presenter asked how Labour plans to pay for such proposals. Neil asserted that the party intends to borrow for these investments. And on this subject, he said:

National debt’s already an incredible £1.7tn… If you borrow to invest… our national debt, which has already soared under the current government, would soar even more under Labour, wouldn’t it?

Neil is right about the current scale of the debt. The Office for National Statistics (ONS) published figures on public sector finances in April. And though the deficit had fallen by £20bn in the year to March 2017, the debt grew by £123.5bn. That brought the debt – the amount of money owed by the UK government – to £1,729.5bn. David Cameron inherited a national debt of £811.3bn when he became prime minister in 2010. So the Tories have more than doubled the debt, by £918.2bn, in their seven years in government.

But Neil is essentially attacking Corbyn’s Labour for thinking about borrowing more money because the Conservative government has already got us into extreme debt. Now, where have we heard that before?

When the Conservative Party entered government in 2010, it was famously greeted with a note saying there’s “no money left”. This was, of course, in part due to the bank bailouts following the 2008 financial crash. And the Tories have used Labour’s handling of finances as a stick to beat the party with ever since.

In 2015, for example, as the general election approached, the Institute of Fiscal Studies (IFS) assessed that Labour’s borrowing in government could be £90bn higher than the Conservatives. And the Tories used this to claim that, if voted in, Labour would “borrow more and rack up more debt”.

Financial credibility certainly affected Labour at the ballot box in 2015. But now, after the Conservatives have ‘racked up’ a £1.7tn debt, the IFS is advising that the Conservatives should adopt fiscal rules closer to Labour’s current ones.

Yet no-one barely mentions this about-face and this massive debt, or how it reflects on the Tories. Neil talked about the debt in the interview, but only as an argument against Labour’s plans.

In the interview, Corbyn argued that government bonds issued to carry out the party’s plans “would be paid for by the profits” of the renationalised industries. He also said:

what we get in return is investment in better services. That, in turn, would encourage economic growth.

Furthermore, he said that the “imbalance” of investment across the country has “to be addressed”. He argued there is “far too much” investment in London and the South East and not enough in places like the North West, North East and Yorkshire. He claimed the national investment bank will address this.

Whatever people think of Corbyn’s manifesto, the outlays it proposes are coupled with long term economic benefit. We may have to pay to reclaim some of our public services, but we get lower costs and profits streaming into the treasury as a result. We will pay to invest in the country, but that will bring us economic growth. That’s Labour’s argument. What, however, has the Conservatives’ £1.7tn debt given us in practice over the last seven years? Austerity is the answer that will come to many people’s minds.

Obviously, debt is not a preserve of the Labour Party. As Neil pointed out. But what that borrowing is used for can vary dramatically between political parties. As can the impact that borrowing has on people’s lives. And that’s something voters should seriously consider when casting their ballot on 8 June.

Watch the first half of the interview here, and the second half below: