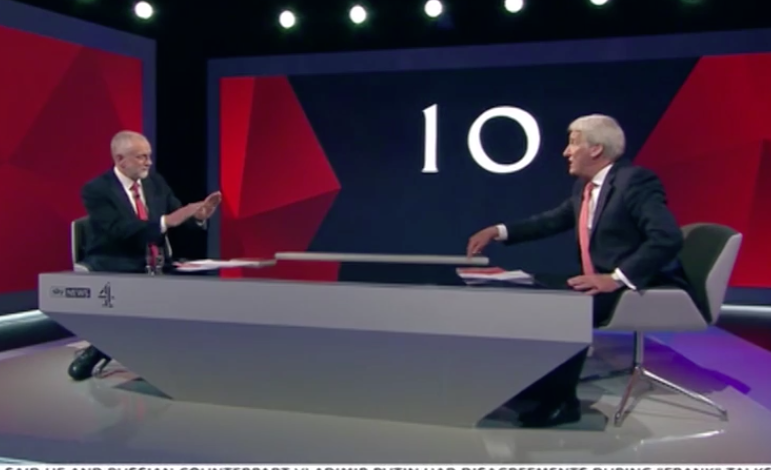 There isn’t a politician in Britain who doesn’t fear a grilling from former BBC bulldog Jeremy Paxman. And on Monday night, he came out of retirement to take on Theresa May and Jeremy Corbyn for the Sky/Channel 4 News Battle For Number 10. While May crumbled, the Labour leader did the unthinkable: he turned the tables.

Paxman focused his attack on Corbyn’s personal views. For minutes, Paxman listed past-stated positions of the Labour leader which did not make it into the manifesto. Corbyn answered that, of course, a manifesto built on the consensus of an entire political party, its members, and affiliated organizations, is going to look different from one person’s personal opinions. This went down well with the audience, but Paxman continued to push – moving on to the issue of the Queen. Paxman said:

There is nothing in this manifesto about getting rid of the monarchy, which is another thing you believe in, isn’t it?

Corbyn sat back in his chair, and replied with a smile:

Look, there’s nothing in there because we’re not gonna do it.

The interview had to take a pause for a moment due to audience laughter. And the answer went down as well out of the studio as it did inside.

The audience laughed at Theresa May 5 times in total over both events. Corbyn got *a* laugh on purpose. #BattleForNumber10

Someone even turned the moment into a ‘Thug Life‘ video meme.

While Corbyn dropped the mic, Theresa May dropped the ball. Channel 4 News‘ Fact Check was working overtime to point out repeated deception from the PM throughout. This persistent evasion led the audience to get restless and begin to laugh openly at and heckle May.

Theresa May is heckled by members of a live TV audience while discussing education budgets. #BattleForNumber10 pic.twitter.com/g0J9GzDOeC

But once May sat opposite Jeremy Paxman, her night went from bad to worse. Paxman focused on May’s repeated flip-flopping and broken promises. The immigration targets she and her party have set, missed and re-promised for three elections in a row. The six times she promised there would no general election before 2020, and her failure to come up with a reasonable excuse for changing her mind. Breaking her promise never to raise National Insurance, and then reversing the decision within a week due to bad publicity. And the latest U-turn on the ‘dementia tax’ cap – first there was a cap, then there wasn’t, then there was again but May wouldn’t even guess at what it would be. Paxman concluded:

If I was sitting in Brussels, and I was looking at you as the person I had to negotiate with, I’d think: ‘she’s a blowhard who collapses at the first sign of gunfire’!

The audience erupted in applause and it took May several seconds to say anything of value.

Jeremy Paxman has delivered the best quote of the election campaign so far.#BattleForNumber10 #blowhard #GE2017pic.twitter.com/xyr8wCpO0y

She kept her temper, and wasn’t drawn into saying anything new (or substantive) – but that’s a pretty low bar for a woman applying for the job of leading the country. Pundits, politicians and members of the public from across the political spectrum agreed that Corbyn trounced May. And just over a week from election day, it may have been the Conservative leader’s last chance to turn her calamitous campaign around.