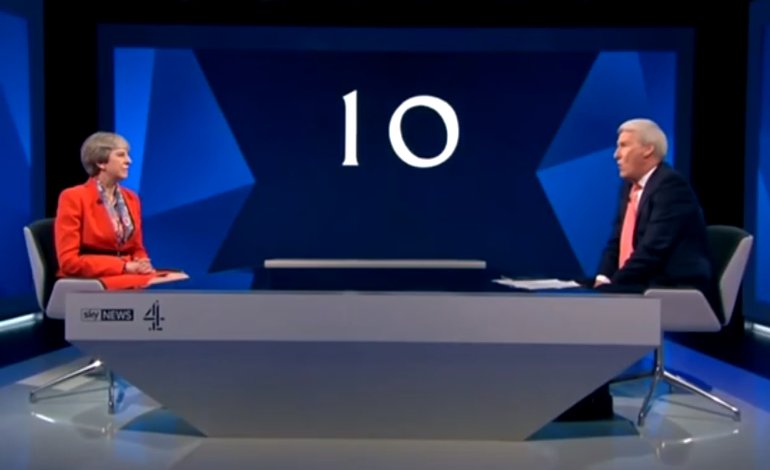 On Monday evening, Theresa May finally appeared on national television to take unscripted questions from the public and from Jeremy Paxman. It did not go well. Her evasive, sweaty performance stood in sharp contrast to the calm, confident delivery of Jeremy Corbyn. But you would never know it from a glance at the front pages of the UK press this morning.

Viewers agreed that Labour leader Jeremy Corbyn had the toughest interview in terms of questions. You just wouldn’t know it from the answers. Calm, measured, and light enough to get the audience laughing with him – it was described by conservative blog The Spectator as “one of his most assured media performances”. ITV‘s Robert Peston tweeted:

I think everyone, including me, under-estimated seductive power of @jeremycorbyn's astonishing good humour, even when Paxman thumping him

That was Corbyn's best performance.

Corbyn had the cigars out at the end there. Breezed through.

And even Nigel Farage:

I may not agree with @jeremycorbyn but he came across as being totally sincere. Paxman didn't score any goals .

The Labour leader gave assured answers across a range of issues. But perhaps his strongest answer was to a small business owner who took issue with paying staff a living wage.

Jeremy Corbyn responds to the businessman by asking if he is happy ignoring our many societal problems #BattleForNumber10 #GE2017 pic.twitter.com/RIiYXQUYHo

By contrast, Theresa May endured quite a different fate. She began well, giving reassuring answers and remembering to smile. But in the background, the Channel 4 News Fact Check service was reminding us that these answers were completely inauthentic.

Asked by a serving police officer to stop the cuts that were harming his force, Theresa May repeatedly stated that the police budget had been protected. This is not true.

In another powerful exchange, an audience member confronted May over damaging cuts to school funding. As May awkwardly evaded the question, the audience began to heckle her.

Theresa May is heckled by members of a live TV audience while discussing education budgets. #BattleForNumber10 pic.twitter.com/g0J9GzDOeC

Once again, Fact Check showed that May was lying. Her government will cut funding for schools.

School cuts are complicated but IFS is clear that there are real terms cuts per pupil planned, as @faisalislam said: https://t.co/DI2WaykXCg

An NHS midwife drew applause from the audience for a relentless challenge on May over cuts to the health service. One gentleman was even captured on camera saying ‘bollocks!’ as May once again claimed a seriously underfunded public service was a figment of our imaginations.

"I'll believe it when I see it" says midwife in response to Theresa May's promise to make the NHS a world class service pic.twitter.com/K3QF9U3tEC

But once May sat opposite Jeremy Paxman, her night went from bad to worse. Paxman focused on May’s repeated flip-flopping and broken promises. Her immigration targets that were set, missed and re-promised. The six times she promised there would no general election before 2020, and her failure to come up with a reasonable excuse for changing her mind. Breaking her promise never to raise National Insurance, and then reversing the decision within a week due to bad publicity. And the latest U-turn on the ‘dementia tax’ cap – first there was a cap, then there wasn’t, then there was again but May wouldn’t even guess at what it would be. Paxman concluded:

If I was sitting in Brussels, and I was looking at you as the person I had to negotiate with, I’d think: she’s a blowhard who collapses at the first sign of gunfire!

The audience erupted in applause and it took May several seconds to say anything of value. She kept her temper, and wasn’t drawn into saying anything new (or substantive) – but that’s a pretty low bar for a woman applying for the job of leading the country.

Jeremy Paxman has delivered the best quote of the election campaign so far.#BattleForNumber10 #blowhard #GE2017pic.twitter.com/xyr8wCpO0y

The May section of the debate was so thunderously poor that #TheresaMayGifs trended on social media, as viewers competed to find the best way to sum up the car crash.

But according to the front pages of the UK press today, none of this even happened.

Conservative commentators were notably absent from the Twittersphere during the debate. Most were either silent or agreeing that Corbyn had won the night hands down. But before bed time, there was speculation that this may all change in the morning. And it did. The press had decided that May actually appeared ‘strong and stable’ and that Corbyn had the toughest night of it.

According to The Times, May wooed working class Britain over Brexit. The Telegraph accused Corbyn of dodging terror links. The i declared the whole thing a draw, and described it as ‘bruising’ for both. But perhaps the most offensive front page came from the supposedly left-leaning Guardian, which used three quarters of its front page to attack the Labour leader’s performance, barely even mentioning Theresa May. The Sun, The Mirror, The Metro and others seemed to pretend the debates didn’t even happen. 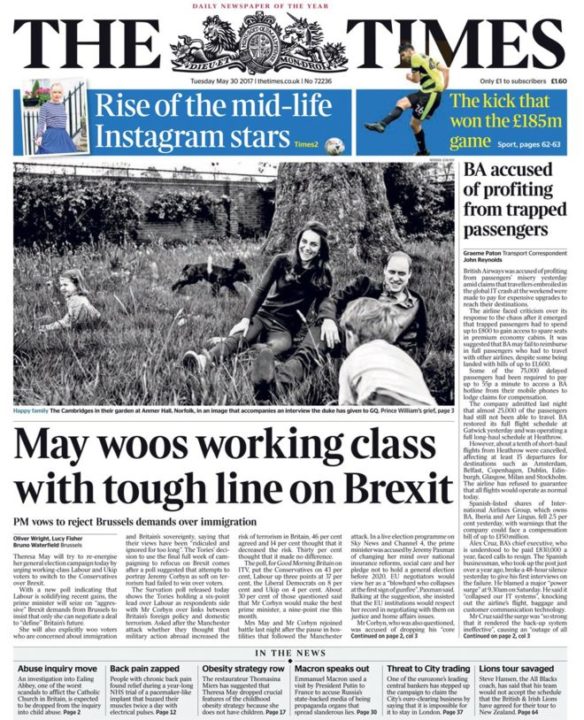 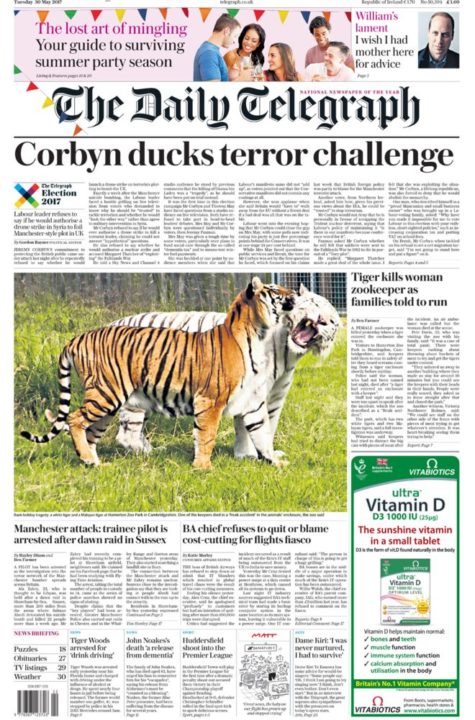 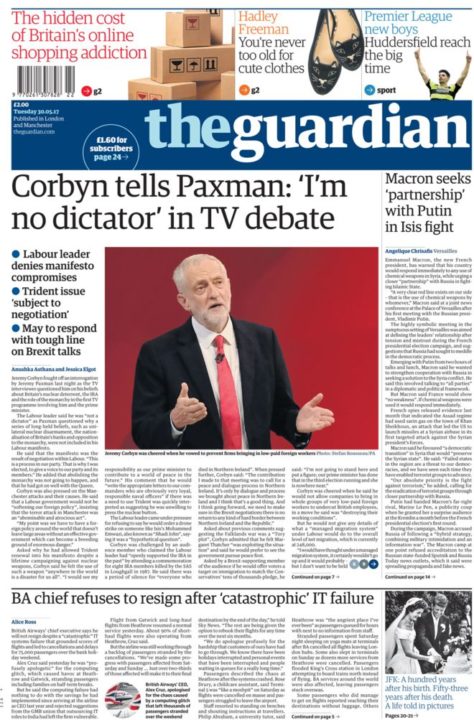 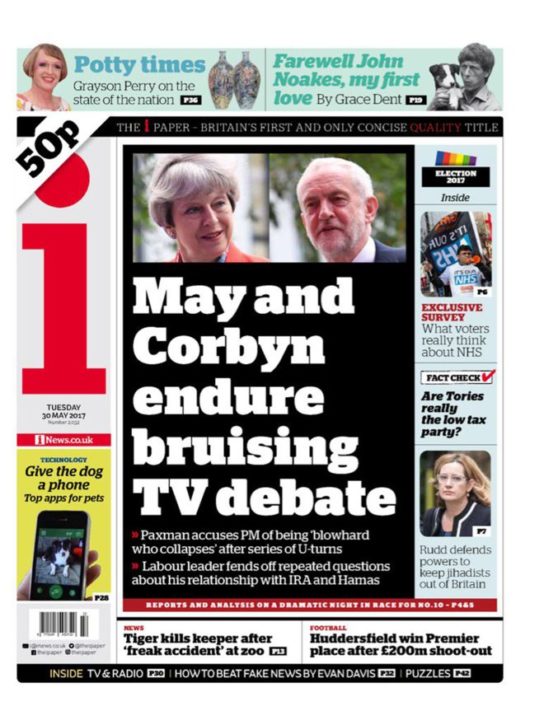 Those who were not watching or were seeing the reactions of others on social media would be left with an entirely warped view of what happened the night before. Because not for the first time, the UK press is doing all it can to prop up the May campaign.