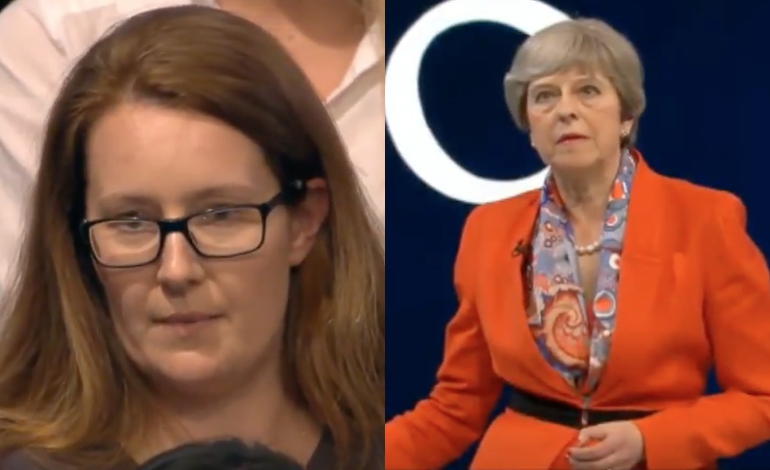 Theresa May and Jeremy Corbyn took part in The Battle for Number 10 on 29 May. Both faced questions from the audience and from Jeremy Paxman. But it was a question and response from a midwife that led to the most moving part of the debates. And it could cost Theresa May the election.

I’m a midwife in Devon. And I believe the wealth of a nation lies in the health of its workforce. How do you justify the chronic underfunding of the NHS that I see at work, considering that we now have one of the lowest budgets according to GDP?

May responded with meaningless platitudes:

And then tried to turn the argument back to her favourite subject, Brexit:

We want that first class NHS. But we can only do that if we have a really strong economy to pay for it. And that’s where the Brexit negotiations but so much else actually comes in.

Angela was given a chance to respond to May’s answer. And you can hear the emotion in her voice as she described the reality of the situation in the NHS:

I see a lot of efficiency savings that are actually cuts. I see hospitals closing. I see staff that are at their wit’s end because they can’t give the care that they want to give. I’ll believe it when I see it.

And this is exactly why May has spent the entire election debate avoiding real people. Because when she does, she is confronted with the reality of what she and her government have done to this country. Whether it is health, education, welfare or the economy, the Tories have ruined lives for so many people. And these people know what they’re talking about because they are living with the consequences. May cannot placate them with soundbites.

The situation in the NHS is so bad the Red Cross called it a “humanitarian crisis”. And in January, the government was forced to admit that per head funding in the NHS would fall by 2018.

And in terms of midwifery, a survey in 2016 by the Royal College of Midwives found that:

NHS workers have already let us know it is our public duty to get rid of the Tories if we want to save the NHS. But listening to Angela speak is a stark reminder of what the party has done to our NHS and our services.

Anyone listening to the clear emotion in her response in comparison to May’s platitudes knows what they have to do if they want to save the NHS. And Angela might just have destroyed the last bit of credibility May had in this election.