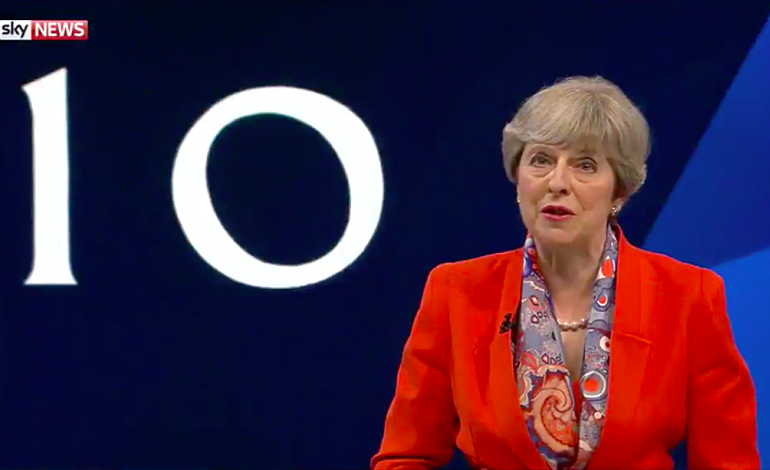 Jeremy Paxman interviewing Theresa May and Jeremy Corbyn is the nearest thing the public will get to a leaders’ debate this election. And what may sum it up is an audience member’s less than subtle reaction to May’s answer during May v Corbyn: The battle for No 10.

On Monday 29 May, the incumbent Prime Minister and opposition leader faced questions from audience members followed by a tough grilling from veteran journalist Jeremy Paxman.

While right-wing papers are claiming Paxman “skewered” and “pummelled” Corbyn, or are otherwise blaming Paxman for Corbyn’s good performance, an alternative and more animated response was seen on social media. It indicates May’s allegedly ‘strong and stable’ platform is collapsing.

The stand-out response was when a television camera panned around as May answered a question on NHS cuts. It appears as though the unknown and unnamed audience member is mouthing “Bollocks. That’s Bollocks”.

Guy in the crowd reacting to May –

The question being asked by an NHS worker was:

How do you justify the chronic underfunding of the NHS that I see at work, considering that we now have one of the lowest budgets according to GDP?

May claimed the government was “increasing the funding into the health service” and would “increase funding into the health service in the future”. As well as the unnamed man thinking this was “bollocks”, the lady asking the question said “I’ll believe it when I see it”. The reaction is of no surprise considering the NHS has endured so many cuts that it’s described as being at the point of collapse. Arguably just like May’s election campaign.

It wasn’t only May’s apologist stance on NHS cuts that got a bad reaction. Hashtags that were trending during the debate – #TheresaMayGifs and #BattleForNo10 – show that many people believed May was not on form at all during the ‘battle’, and that Corbyn actually came out on top.

#TheresaMayGifs strong and stable until you ask a question … pic.twitter.com/pmphjoLiQz

#BattleForNo10 How comfortable and personable @jeremycorbyn was and how weak and shifty @theresa_may is ! My verdict May no match to Corbyn

Of course I am biased, but even the most ardent Tory would surely agree Corbyn won the public Q&A hands down #BattleforNo10

This man may thus be speaking for all of us when it comes to May’s government:

The man who speaks for an entire nation? #BattleForNo10 https://t.co/oVGCKKdstI

Nothing is safe, however, and whoever you predict will end up in No 10, it will depend on your vote.