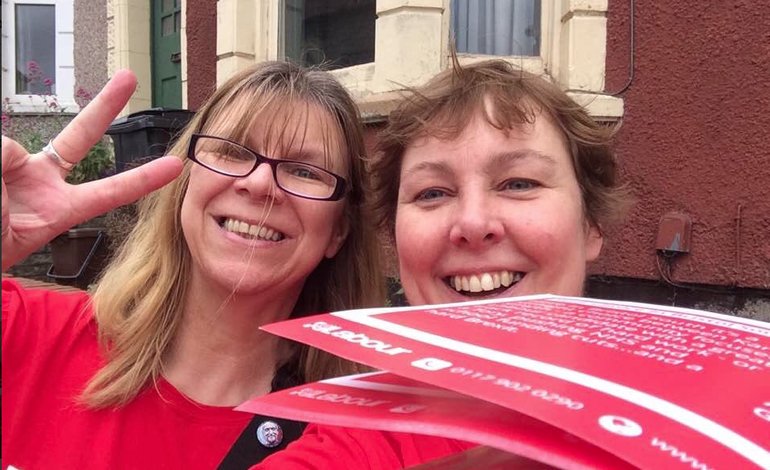 Two Bristol women spent election morning canvassing their community to get the vote out for Labour. But when they tried to cast their own votes, they were told they were not allowed to enter the polling station in their Labour T-shirts. They were so determined to vote, they whipped off their tops and voted in their bras.

Sarah MacDonald and her partner Jules Taylor spent the morning canvassing in the Windmill Hill constituency of Bristol, in South West England.

The couple then went to cast their own votes at Blenheim Scout Hut, in Bedminster Down. But electoral law requires that no party political clothing or banners are present at polling stations. Faced with semi-nudity or disenfranchisement, the pair whipped off their tops and voted in just their bras.

We just voted in our bras. Our Labour t-shirts weren't allowed in the polling station so we had to strip off. 😧😆@karinsmyth @BristolSouthLab

The Canary was able to catch up with the women after they voted. Sarah told us:

We are in Karin Smyth’s constituency in Bristol South. We were wearing our Vote Labour T-shirts so we could go directly to Chessel Street (Karin’s Bristol South Labour HQ) to help with knocking up. As we walked in to the polling station we were told that we couldn’t wear anything political. Jules’ immediate reaction was ‘that’s no problem, we can sort that!’ and off came her T-shirt! I wasn’t surprised as the same thought went through my head. I stripped off too and chucked my T-shirt on top of Jules’. The polling station girls were very amused, as were the other voters. So we took our ballot papers into the booth, put our Xs in the right place, posted our papers in the ballot box and pulled our T-shirts back on.

Their excitement seemed to echo across the country. There are reports across social media of people voting for the first time in their lives. Whether the Corbyn campaign wins the day or not, it has done more to engage UK voters with politics than anything in a long time.

– Call everyone you know.

– Help people get to the polling station.