Just when you think The Daily Mail can’t get any worse, it concocts a new scandal to smear Corbyn [IMAGE] 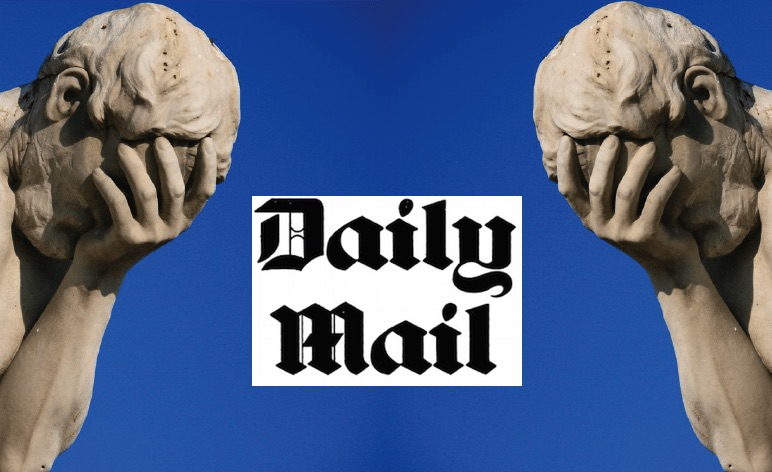 On 18 July, The Daily Mail ran this front page: 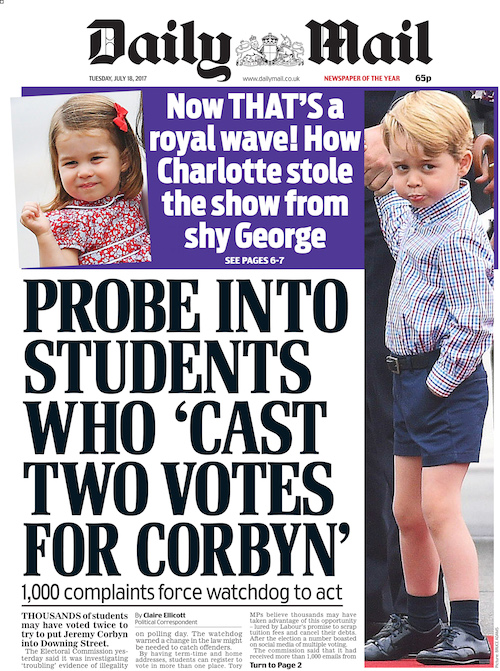 And it wasn’t the only right-wing rag to have a fit of the conniptions about supposed ‘double voting for Corbyn’. The Telegraph, The Express and The Sun all joined in.

The story is based on a new report on voter registration by the UK’s elections watchdog, the Electoral Commission. That report [pdf] says “it is troubling that some voters appear to have admitted voting more than once at the general election”. But there’s a problem with the story as presented by the right-wing media. In fact, as The Mirror has pointed out, there are several.

1) The scale of the problem

For starters, The Mail suggests:

Thousands of students may have voted twice to try to put Jeremy Corbyn into Downing Street.

This would indeed be serious, and could have swung many seats. But the Electoral Commission doesn’t actually mention how many cases there were. In fact, it explicitly says [pdf] it has so far seen no evidence of widespread abuse:

We take these reports very seriously, though there is so far a lack of evidence of widespread abuse.

The Mail‘s “thousands” apparently refers to the number of emails the Electoral Commission received, rather than the number of incidences of alleged fraud. Which brings us to the next problem.

2) The source of the story

The Mail reports that the Electoral Commission:

received more than 1,000 emails from the public as well as 38 complaints from MPs.

But it fails to mention what concerns those emails raised. The Electoral Commission is clear [pdf] about this. The complaints did not refer to cases of fraud witnessed by members of the public. In fact, the complaints referred to – wait for it – stories in the media [emphasis added]:

In the days following the election, a number of people on social media claimed that they had voted twice at the general election. We received a significant amount of correspondence referring to these posts – at the time of writing, we had received 38 letters from MPs raising constituents’ concerns, as well as 1,013 emails and 15 telephone calls from members of the public referring to media reports about these claims.

The Mail pins the blame for any fraud firmly on students. But the Electoral Commission doesn’t single out students. In fact, it mentions [pdf] a few groups who may be entitled to register to vote in more than one place, including second homeowners.

The Mail, of course, is trying to suggest that this is a story about students voting for Jeremy Corbyn. That headline again:

Probe is launched into ‘students who voted TWICE for Jeremy Corbyn’

But as The Mirror points out:

The report does not explicitly mention the Labour party or the Labour leader.

Over half a million more people registered to vote in 2017 than in the 2015 general election, many of them young. The Mail tries to suggest this surge in voter registrations is suspicious:

But this surge followed concerted campaigning by youth groups, campaigners, and the Labour Party itself in order to get young people to register to vote. That’s democracy. As Labour’s Cat Smith, the Shadow Minister for Voter Engagement and Youth Affairs, told The Independent:

To build a healthy democracy we need active participation of all citizens, which is why the Labour Party delivered a ground-breaking digital campaign which sought to maximise the number of young people to register to vote during the election period.

And in fact, many students were actually turned away from voting – because of electoral registration problems.

The evidence isn’t there

Double voting is, rightly, a criminal offence in the UK. And the electoral system in the UK clearly needs reform. At the moment, Britain’s 381 electoral registers are, as the Electoral Commission puts it, “dispersed and unconnected”. So it’s difficult to identify duplicates. And, of course, it may yet turn out that a number of students did ‘double vote’ for Corbyn.

But right now, the evidence isn’t there. Yet The Mail decided the story was robust enough to splash across its front page, pinning the blame on students.

If we want a real democracy in this country, we need a robust electoral system. But we also urgently need a media that does its job – and sooner rather than later.