The UK's nuclear deterrent has been placed on 'red alert'. And Theresa May will be furious - The Canary 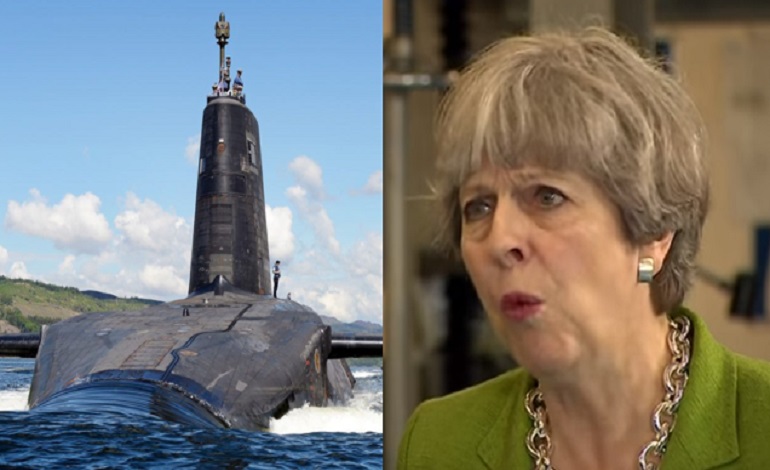 The UK’s nuclear ‘deterrent’, the Trident submarine system, has been placed on ‘red alert’ by an official government watchdog. And it’s not the kind of warning the Tories will want to hear.

Meanwhile, a leading anti-nuclear campaigner has told The Canary that the government is being “dishonest” about Trident.

The Infrastructure and Projects Authority (IPA), which is a spending watchdog for the Cabinet Office and Treasury, has looked at the government’s plans to replace the Trident system. As The Canary previously reported, parliament voted in July 2016 to renew the nuclear weapons system at a cost of £41bn. But the IPA has reported that the project is “undeliverable”. The Times reported that it said:

There are major issues on project definition, schedule, budget, quality and/or benefits delivery, which at this stage do not appear to be manageable or resolvable.

It also says that the taxpayer will now have to find an additional £235m for the project.

The name Trident refers to the nuclear missiles that are carried on four Vanguard-Class submarines, based out of Faslane, on the Clyde in Scotland. At any one time, there is one submarine on active patrol, another in service, another preparing to patrol, and a final one on exercise.

Each submarine can carry 16 Trident missiles (but since 2010, this has been reduced to eight), and each missile can hold up to eight warheads; but 40 in total are on each sub. But the IPA report comes after it was announced that the UK will be reviewing its military capabilities, amid concerns that the government is underfunding military spending to the tune of £20bn.

CND General Secretary Kate Hudson spoke to The Canary about the IPA announcement. She said:

We learnt over the weekend that a government watchdog has given a ‘red alert’ after another part of the government’s Trident replacement ran over budget. £1.465bn, which had been committed to upgrading facilities that make and maintain reactor cores for the existing and new generation of Trident submarines, is set to rise by £235m to £1.7bn. The colossal rise has sparked fears that other areas of Trident spending will also exceed already weighty budgets.

The Times reported that the increased cost is because the Ministry of Defence (MoD) decided to fit one of the submarines with a new nuclear reactor. It said:

This was prompted by the discovery of low levels of radioactivity in the cooling waters of a test reactor, identical to that in HMS Vanguard… As well as raising costs, the extra work has delayed by five years the upgrade of parts of the Rolls-Royce site in Derby where the work for Vanguard and the Dreadnought boats is carried out.

But Hudson believes that the additional £235m cost is not the only area of spending that needs to be under scrutiny. She said:

Earlier this month, a Freedom of Information request revealed that spending on two AWE [Atomic Weapons Establishment] nuclear bomb factories in Berkshire had doubled from a budgeted £2bn to almost £4bn. Both of these revelations come after a history of dishonesty about Trident spending, as well as decades of incompetence from the MoD whose budgets, on average, run over by a third.

The IPA report will do little to dispel concerns that the project’s cost is spiralling out of control. Because, as The Herald noted: “all of the IPA’s assessment of a fourth £20bn plan to upgrade Trident warheads has been kept secret for national security reasons”.

But as The Canary investigated last year, there are so many vested financial and political interests at play in the Trident project that escalating costs and delays are unlikely to put a stop to the upgrade.

Hudson was clear about CND views on the cost of Trident:

In 2016, CND added up the publicly available figures for replacing Trident. We added up the in-service costs, the infrastructure costs, as well as the submarines and other areas of spending. And we discovered the cost of Trident reaches a staggering £205bn. Although the government’s own figures include a contingency fund, it’s clear that we will soon reach a point where the cost of Trident surpasses £205bn.

This latest announcement shows that the whole Trident renewal project is falling apart, even before it has properly begun. But with a government hell-bent on upgrading our nuclear capability, it is more important than ever that opposition MPs, campaign groups, and the public apply as much pressure as possible. Otherwise, the UK nukes will turn into the biggest ‘white elephant’ in living memory.

This article was updated at 12.30am on 25 July to reflect an error: it previously stated that each Trident missile could hold 40 warheads; the number is actually eight warheads on each missile, and 40 in total on each submarine.

– Contact your MP if you disagree with the Trident nuclear “deterrent”.