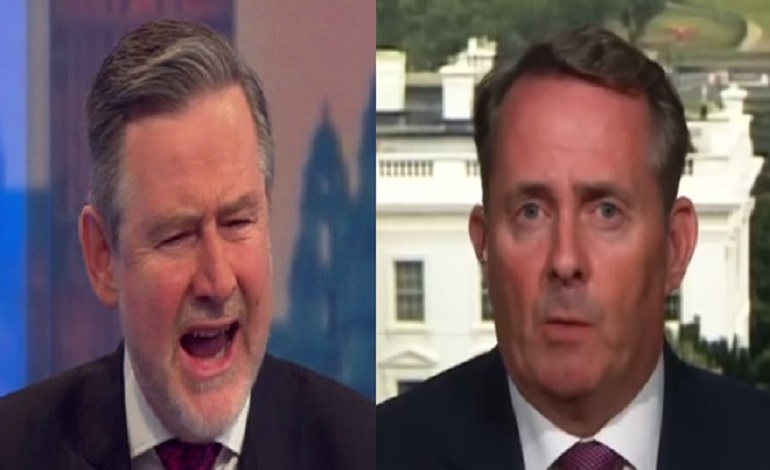 Labour’s Barry Gardiner has waded into the storm surrounding Liam Fox, Brexit and US chlorine-washed chicken. And he didn’t mince his words, as he combined a slick take-down of Fox with a serious message about the controversial subject.

Labour’s Shadow Secretary of State for International Trade was commenting on the news that the UK may have to accept chlorine-washed chicken as part of any post-Brexit trade deal with the US. With Fox reportedly in favour of allowing the importation of chicken processed in this way, Gardiner said:

Currently, this type of process is illegal under EU law, and the chicken products cannot be imported here. It’s outlawed along with the use of growth hormones in beef farming, the spraying of pig carcasses with lactic acid, and the sale of unlabelled genetically modified food.

“Liberalisation”. Whatever that means…

Fox was asked at a US press conference if he supported allowing imports of chlorine-washed chicken to the UK. He said:

In a debate which should be about how we make our contribution to global liberalisation and the increased prosperity of both the UK, the US and our trading partners… the British media are obsessed with chlorine-washed chickens, a detail of the very end-stage of one sector of a potential free trade agreement. I say no more than that.

But Gardiner was clearly unimpressed with Fox’s response. He said of the potential loosening of trade laws:

By arguing the case for chlorine-washed chicken, Liam Fox shows he is ready to abandon British poultry farmers in favour of cheap US imports that do not meet our sanitary or animal welfare standards… every effort must be made to support British exporters and reduce unnecessary barriers to trade, but never at the expense of the interests of British consumers and producers.

The row over US chicken is not only a sticking point between Labour and the Tories, and between the government and environmental/welfare campaigners. It points to, once again, deeper divisions in the Conservative Party over Brexit and the shape of the UK in its wake. Theresa May has refused to comment on the issue, with a spokesperson saying “I’m not going to get into hypotheticals”.

Of course it’s important we explore new trading opportunities, with the United States and other nations across the world, but it must not be, and the cabinet is agreed on this, at the risk of dropping any environmental standards whatsoever.

Fox may well be overstating his position on a potential US trade deal; possibly counting his chickens before they’ve hatched. But it’s clear that opposition to the type of food production that the US considers the ‘norm’ is growing. And it could mean chickens (chlorine-washed or not) coming home to roost for the government.